Taylor Morris and Danielle Kelly's love story is a captivating one: Morris was hit by an explosive device while serving in Afghanistan and became one of the few surviving quadruple amputees, but that didn't stop him from dancing at a recent wedding with the girlfriend who has stayed by his side throughout his recovery, 9 News MSN reports.

Morris, 23, is an Navy EOD tech -- or Explosive Ordinance Disposal tech -- from Iowa who was injured in action last May after stepping on an IED. He lost both of his legs, his left arm from the bicep down, and his right hand.

“I don’t think a second of that day will ever fade from my memory," Kelly told the Cedar Falls Patch back in July. "I try not to think back on that day, because it brings back all the raw feelings. Instead, we are looking forward.”

Morris is still recovering at Walter Reed but, he and Kelly are moving forward. They returned to Iowa in August to attend the wedding of their close friends, where they danced to "Old Time Rock And Roll." (See video above.)

The weekend marked the five-month anniversary of Morris's accident, and it was the first time he had set foot back in his hometown. Photographer Tim Dodd, Morris' childhood friend, captured the parade honoring his recent visit on his blog.

Morris and Kelly were first put into the spotlight in May when the Chive posted a story about the couple with a series of moving photos that Dodd had taken. (Those photos recently went viral on Buzzfeed. )

At the time, the Chive asked for donations to help the couple build their dream home: a wood cabin on a lake. Within 45 minutes, close to $28,000 had been raised. That number later rose to $250,000.

Morris' family has since started their own blog to share his story and document his recovery. His most recent accomplishments include being able to crack eggs to whip up French Toast. He also recently met Bruce Springsteen.

For more photos of Taylor Morris and Danielle Kelly, scroll through slideshow below. 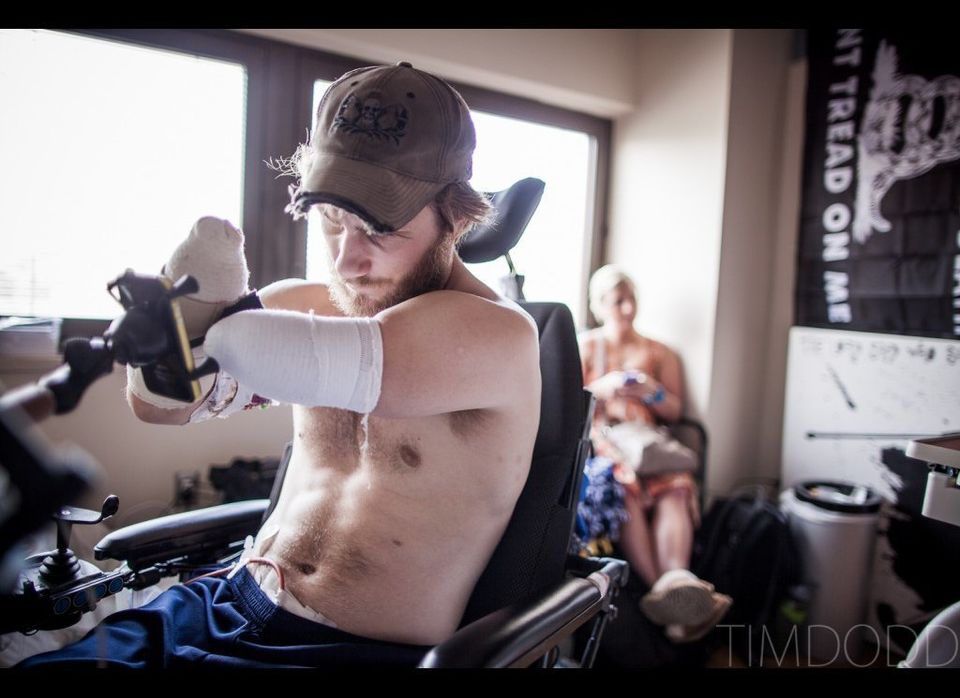