A breathtaking new short film produced by Jan Sorgenfrei for the Unbound Project shows Lina Lind Christensen, a Danish non-profit worker with a master's degree in philosophy, rescue hens who are mere seconds away from losing their lives.

Lina has always had a strong connection with birds, and is the guardian of rescued budgies and canaries in addition to hens. She believes most people don't ever really get to know birds because they're shy at first and it takes them time to show who they really are--a quality she empathizes with, because she's like that, too. 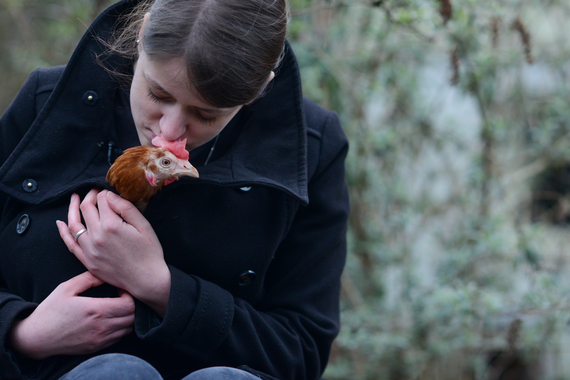 When Lina learned more about commercial animal agriculture and the way animals suffer in food production, she and her husband decided to rescue some hens from the egg industry. She started calling farm owners to ask if she could have some of their hens; some laughed, and one said "why would you want some of my trash?"

The first time she went to an egg facility--where hens spend their lives crowded indoors, never seeing sunlight or breathing fresh air--she was astonished to see for herself how bleak it was. It was a profound moment for her, she says, realizing that industrial egg production was indeed as bad as she'd read about and seen in videos.

That day, the farmer allowed them to take six hens. He brought them out in one trip, hanging them upside down by their legs and tossing them into a crate, oblivious to their panic.

Lina says the farmers and farm workers usually seem desensitized to the animals' suffering, writing her off as silly for showing concern about the hens and wanting to give them care and companionship. However, she says, once she picked up a hen with a broken wing who had been dropped outside the facility, and the farmer seemed happy the hen would be rescued, saying "it's probably for the best she's going with you."

In this world where animals are more food production machines than they are sentient individuals, these hints that even the farmers sometimes understand how terrible this system is are a glimmer of hope. 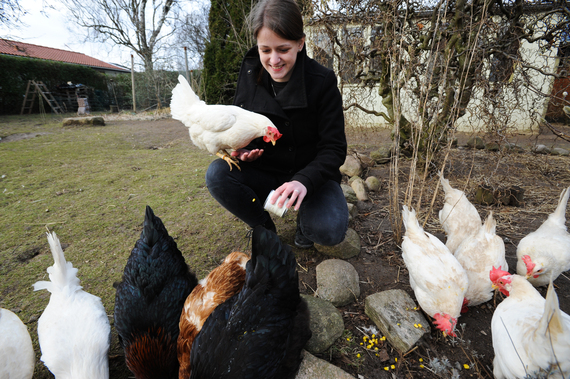 In the last five years, Lina has rehomed more than 1200 hens who would otherwise have been killed in the egg industry. Some hens from each rescue stay on her backyard sanctuary, Frie Vinger (Free Wings), where they become ambassadors to the media, school classes, and other visitors. Lina's goal is to show that each animal is an individual who deserves a free and happy life, and to inspire others to understand this as well.

All photos by Jo-Anne McArthur for Unbound Project.