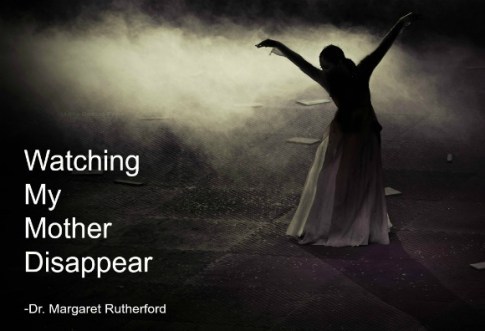 My mother, Betty, was a beautiful, talented, smart woman who never believed any of that.

There were various reasons for her disbelief. Some of them, I understood. Some, I didn't. And never will.

At age 35, she searched for help after her first panic attack. She didn't call it a panic attack. Probably the doctor didn't either. It was 1960. All of a sudden, her heart was pounding. She was perspiring, hands clammy, all while she was trying to quietly attend her ladies church circle meeting. (Something she didn't particularly enjoy but was a duty for any proper Southern wife in the 1960s.)

After hearing her symptoms, the doctor gave her a sedative. This was common practice at the time, especially for women. She was told to take it every day. "Nerves," he called it. And he dismissed her.

Thus began my mother's prescription drug addiction. That drug was called Equanil. There were others. She used them daily for over 30 years.

No doctor ever stopped to try to help her understand the root of her anxiety. They handed her more pills. It's true that she did not seek therapy. Rather, she ended up developing behaviors of an addict. Getting prescriptions from different pharmacies. Different doctors. All she could do to feed the craving, as she secretly danced with her own demons.

Until the laws changed, and she couldn't do it anymore.

I figured out later, when I entered graduate school (and diagnosed everybody and their dog ... including myself by the way ...) that my mother had obsessive compulsive tendencies, was a horrible worrier (termed Generalized Anxiety Disorder), and was not a hoarder per se but certainly was what she would call a "saver."

She would buy multiple products all at once -- hair spray, deodorant -- and line them up in drawers.

She would panic if she did not have two bottles of the same medicine (back when the pharmacies allowed you to do that). One for home. One for her "travel bag." She didn't travel much.

She was highly perfectionistic. Weeks prior to a party, the dining room table would be elegantly set. Silver gleaming. She would check and recheck every detail. She would never eat, making sure every guest had all they needed. If someone was sitting alone, she would chat them up to make sure they felt welcome.

She would get up hours before everyone, to "put her face on," as she called it. I don't think my dad ever saw my mom without makeup.

Funny how that comment is a bit ironic now.

To her credit, she realized she had a problem. She was in her late 60s. She could no longer metabolize the medication. She was irritable. Acting irrationally. Driving erratically.

I remember a conversation we had. It was when she decided she would go for help. It was the last one we would ever have where she seemed emotionally present.

She got off the meds. It took several months.

Without the mix of sedatives, painkillers, and benzodiazepines, Betty was no longer Betty.

She was a shell of herself. She had aged 20 years. There was evidence of neurological damage -- whether or not that occurred independently of the multiple medications she used, we will never know.

For most of the day, she remained almost mute. She would speak when spoken to. Smile only when something inside of her remembered that that was the socially appropriate thing to do. She walked hesitatingly, and as the years went by, almost like she had Parkinson's.

Dependence on a drug is more than physiological. You can forget how to live life without it.

I might catch a glimpse of her old self if I called at just the right time. Around 7:30 at night. Her rituals for the day would be over. She would ask a question or two. There would be a slight lilt in her voice. Maybe she would laugh.

It was welcome but painful to hear. Because I knew it would be gone.

She lived that way the last 15 years of her life.

Maybe you and a parent share time, and do things together that continue to build a sense of trust and intimacy.

Relish that time you have together.

Others of you may have parents that you're also watching disappear. With alcohol. With drugs. Maybe they are in denial. "I need it to sleep." "It's prescription." "I get up and work everyday -- it's not like I'm an alcoholic."

But you see the changes in them.

I had a patient one time who told me, "I had fantastic parents until 5:00." When the booze made its appearance.

Or maybe you are the person escaping. Disappearing. Not knowing how to handle anxiety, insecurity, loss, fear -- any other way than by downing a medication. A drink. Taking a hit.

We live in a culture glorifying escape. We don't know how many people are actually using benzodiazapines, for example (Xanax, Valium, Librium, Halcyon, Ativan, Klonopin). But it's a lot. People share them with their friends. Kids steal them from their parents.

Escape is easy to justify.

My mother's world was not glorious.

Please realize that you may not simply be sabotaging your present if you are trying to escape it. You may be ruining your potential future.

And that of the people you love. Who love you.

My mother told me once, in that halting, breathy voice that became all I would hear in her last years, "I wish I had known what I was doing to myself."

You have heard her story.

She would want you to know that there is another way.

And to my Mother. Whether you knew it or not, you were beautiful. And talented. And smart.

I missed you then. I miss you now.

Watching My Mother Disappear
Milestones Through the Years