I stood up and looked into the darkness. Somewhere beyond the small circle of light illuminated by my headlamp was my destination, the summit of Mount Everest, my sixth ascent of the "Seven Summits" -- the highest mountain on each continent. It meant I was now very close, just one mountain away, from becoming the first openly gay person to accomplish this feat as part of my Rainbow Summits Project. It was close, but still out of sight. I was at 28,707 feet -- just 296 vertical feet below the highest point on Earth -- behind me a snake of over 75 people climbing up towards the summit. It was time to move on and finish my cold and windy quest...

Since I began my Seven Summits quest and my Rainbow Summits Project 18 months ago, I have often been asked to explain the connection between achieving this mountaineering objective and raising awareness and funds to support LGBTQ youth. The answer lies in the challenge. Mountaineering is never the easy path, and unanticipated obstacles are constantly encountered. It can be unforgiving and risky. It can be cold. And it is often a lonely pursuit.

So, in my opinion, can be growing up as an LGBTQ youth. Often shunned by our communities or families, growing up gay requires courage, strength, perseverance, adaptability and forgiveness.

Climbing mountains also requires courage, strength, perseverance, adaptability and forgiveness. You do not always climb a mountain in a day. Sometimes it takes several trips back to get to the top. But with perseverance, and by breaking down obstacles into smaller pieces, you will, one day, reach the top. But you have to keep trying. In mountaineering, we have an adage: "If you don't summit but do get off the mountain safely, you can always come back, because the mountain will always be here." A similar version can be applied to real life. Don't give up. Don't consider suicide. Your mountain will still be here, with or without you. If you leave, you lose, but if you stay, one day, you will conquer it.

So I stood there, my gaze looking at the impossible. "How the hell am I supposed to get up this?" I said aloud, though I'm the only one who could hear my voice, the sound muffled by my oxygen mask. I committed myself to the final steps and soon could not climb any higher. After a few deep breaths, at just after 4 a.m., the horizon began to ooze golden-orange light and illuminated the more than 20 prayer flags I brought with me, flags given to me by friends, parents, relatives and partners, and some by total strangers in memory of those who were targeted just for being themselves, which I brought to this special place, somewhere where there was nowhere else to go but down, somewhere where they could fly in the wind and spread their message.

I watched the horizon until the sun had fully risen. Tibet bathed in a golden halo. Nepal, on the other side. The triangle shape of Everest cast a massive shadow. I sat down on the rounded peak, stared at the flags, and still in shock, I sobbed. I had done it. It was so worth it, good times and bad, and I knew I was there for every one of us who'd experienced discrimination. I threw the flags up in the air and watched the wind take them and their prayers to every corner of the Earth.

On that windy morning on the summit of Mt. Everest, I saw the lives of these people -- many of them LGBT youth -- reflected in the beauty of this natural setting. I had summited Mt. Everest in honor of other LGBTQ youth who face discrimination and harassment, and also to send a message to others who might be a sexual minority or any other minority in their community: You can do it. Find your Everest. Find it and climb it and stand on top and exult in the sun rising over the vast horizon. 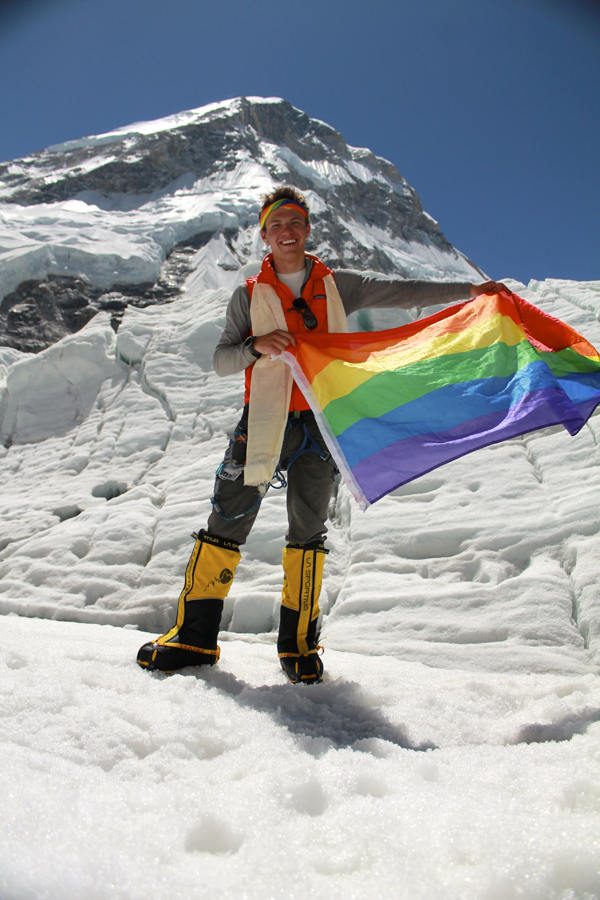 See a slideshow of some of Cason's climbs: