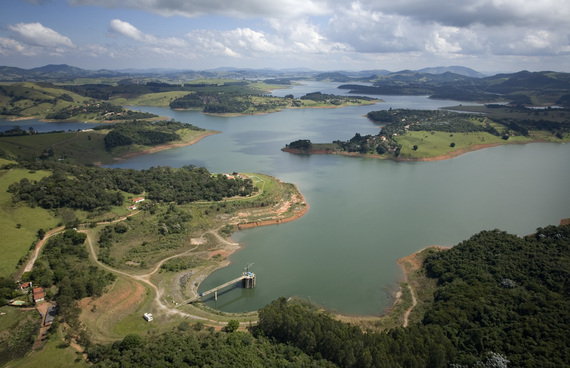 Representatives of the more than 150 countries meeting in New York on April 22 for the symbolic signing of the Paris Agreement on climate change can justly celebrate a historic moment. Phasing out global greenhouse gas emissions this century and holding global average warming to "well-below" 2°C signal an epochal shift, most obviously towards renewable energy. And as the possibility grows that the agreement will come legally into force before the initial target date of 2020[1], a new opportunity is emerging. We can harness the power of Paris--notably the impetus it gives to climate change adaptation--to help tackle a related challenge: the water crisis.

Water is one of the chief ways we will experience the more frequent and dangerous extremes of climate change--through heavier downpours and resulting floods, and longer-lasting droughts and heat waves. Yet even before taking future climate change into account, many countries face acute difficulties as economic and population growth intensify demand for the world's most important natural resource.

Some 1.2 billion people live in areas of physical water scarcity, and about 2.4 billion lack access to basic sanitation. Millions of people are gravitating to the growing ranks of large cities, many of which are already water-stressed.[2] By 2030, demand for water is on track to outstrip sustainable supplies by 40 percent. By 2050, some 240 million people will still lack access to clean water, and 1.4 billion to basic sanitation. Worse, recent research from MIT suggests that in the next 35 years the combination of economic and population growth and climate change could lead to 1 billion people in Asia suffering greater water-stress than they do today[3].

Although Paris never set out directly to solve these problems, the links with climate change are inescapable. Global average temperatures are at their highest in at least 1,400 years and atmospheric levels of greenhouse gases are at their highest in at least 800,000 years. If we let warming rise to 4°C from 2°C, an increasing land area across tropical regions will face "unprecedented heat extremes" regularly each summer. Agricultural losses, vegetation change and species extinction will result, the World Bank warns. At 4°C warming, lower rainfall and drought would halve water availability in some regions, compared with a reduction of a fifth at 2°C.

Adapting our water and sanitation to climate change is thus critical. We must ensure that climate change does not threaten existing water security and, just as important, the increased security which agreements such as Agenda 2030 commit the global community to achieve. Millions of human lives and the health of the natural environment depend on successfully managing the world's water in the teeth of climate change.

How can we do this? One answer will be building conventional "grey infrastructure" such as new pipes, flood barriers and treatment plants. Another increasingly important answer will be investing in nature. Reforestation of riverbanks or restoring wetlands can improve water supply and quality and reduce flooding. Such measures can be doubly beneficial because, for example, they boost carbon sequestration and mitigate climate change.

All this requires massive investment, especially in developing countries where the hydrology can be difficult and rainfall unpredictable and spikey. In 2012, the World Bank estimated that developing countries needed to invest $103 billion a year in water, wastewater treatment and sanitation through 2015. An extra $15 billion annually was necessary to adapt water to climate change[4]. The Bank has not updated these numbers globally but it is unlikely those needs have declined.

The Paris agreement commits rich countries to channel at least $100 billion a year to developing countries from 2020 to reduce carbon emissions and adapt to climate change. These funds will be instrumental in fulfilling Nationally Determined Contributions (NDCs)--the heart of the Paris agreement--to reduce carbon emissions and adapt to climate change. Last month, Papua New Guinea became the first country to submit an NDC. Fiji and the Maldives have received two of the earliest climate change adaption investments by the Green Climate Fund, in both cases to improve the security of water supply.

But there is massive scope for investment from other sources as well. Corporations are drawing up plans to adapt to a 2°C world, and water will be part of their adaptation strategies. The fast-growing green investment market is another source. Green bonds, debt swaps and vehicles such as water funds--which bring together utilities, local communities, farmers and investors to conserve watersheds and improve water supply and quality--have shown they can mobilize private capital. Some of the proceeds of carbon taxes might also be used to adapt water to climate change. In India, a carbon tax could raise $115 billion a year. Only a small part of that amount would cover India's required investment in clean drinking water[5].

If adapting water to climate change is to be as effective as possible, however, the principle of NDCs should be extended to adaptation. Countries will need defined and regularly updated long-term adaptation plans to set out their goals and progress. The Paris agreement can help tackle the water crisis, both through climate change mitigation and through stimulating a more systematic and open strategy for climate change adaptation.