I am often asked these days about whether I think that the decade-long drought in Syria has played any role in the violent conflict there. My answer is always the same: absolutely.

The reason is quite simple, and we have all experienced it. When our basic human needs are not met -- for water, food, clothing, shelter, or sleep -- we get grumpy. When we get grumpy, we fight. We'll snap at our children, bicker with our partners and argue with our neighbors. In regions like the Middle East, which has fought over water for several millennia, it does not take much to fan the flames of dispute into a bonfire of violent conflict.

Last February our research team released a new study of groundwater depletion in the Middle East. The area that we analyzed included Turkey, Syria, Iraq and Iran. The political boundaries of these countries overlie a different set of boundaries, namely those of the Fertile Crescent - the Tigris and Euphrates River basins that supplied the water to support the cradle, and rise, of human civilization.

Using NASA satellites, we found that between 2003 and 2009, the region had lost 144 cubic kilometers of fresh water, an amount that is equivalent to the volume of the Dead Sea. We determined that roughly 60% of the lost water came from the depletion of the regions aquifers (mostly used for irrigation), making it the second hottest of the world's hotspots for groundwater depletion. Only northwestern India has experienced greater groundwater losses in the same time frame. Subsequent analyses have shown that those rates of water loss continue into the present.

Sitting right in the crosshairs of that Middle Eastern hotspot is Syria, as shown in the satellite image below. 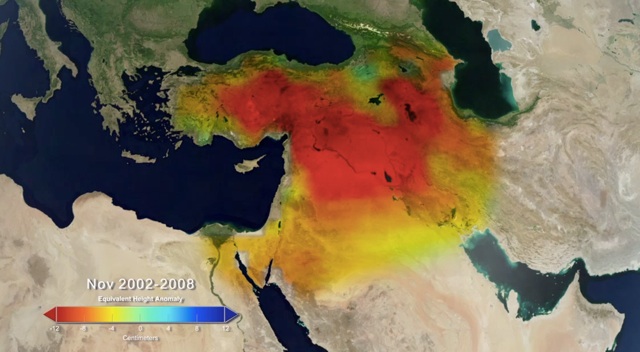 That's not to say that the severe water shortages directly resulted in violent conflict. However, Syria has in fact experienced the perfect storm of water-related misfortunes, that taken together, have arguably played a major role in triggering uprising and violence. Let me highlight a few of these here.

First, the long history of documented tensions over water and its control dates back almost 4500 years. When the default mode of settling disputes has historically been war, it is a very easy pattern fall back on. Regional political instability does nothing to help break this pattern.

Second, Turkey's Greater Anatolia Project, a vast system of reservoirs built just upstream of Syria and Iraq, allows Turkey to store voluminous water reserves within its borders, that would otherwise flow into these downstream nations. Reports indicate that river flows into Syria and Iraq may have been reduced by 40 to 80 percent as a result of the upstream reservoirs. There is little choice for anyone downstream, upon the loss of a significant source of fresh river water, but to tap into groundwater reserves.

Third, Syria is in the throes of an unrelenting drought that began in the early 2000s. The lack of available water forced nearly one million farmers to abandon their land, their heritage and their livelihoods, and to move to the cities, where they spent their long days unemployed and resentful.

Fourth, the now severe lack of river flows due to both the Turkish reservoir storage and the drought caused even further reliance on groundwater. No one knows how many additional wells were dug, since most are unreported, unmonitored and unregulated. It could have been a million. But life, food and energy require water, and the population dug deep, and deeper, and deeper to access it. Just like having too many straws in a glass of water, the level of water began dropping more and more and more quickly.

Finally, many of these same farmers felt that Syrian President Assad's focus on global trade meant that he was turning his back on the agrarian population. With no government commitment to provide the water necessary for agriculture, and no way to obtain it independently because of drought and falling groundwater levels, Assad gave the farmers even more reason to lash out.

Whether or not water scarcity leads to violent conflict depends on a complex recipe that includes several ingredients that must be combined in just a certain way such that the pot boils over. Political stability, government commitment to solutions, national wealth, political relations within the region, the length of the hardship and many other factors all come into play. Clearly, water-driven escalation occurred and tipping points were exceeded that in part have contributed to the situation as it stands today.

Societies have always risen and fallen based in large part on the availability of water. While the wealth of many nations of the 21st century allows for greater water security, many countries, like Syria, have none. First, migration to the cities, and then, mass exodus, suggest that Syria as a nation may not recover, at least any time soon. It is unlikely that its groundwater resources, and likewise, its food security, ever will.

Just after the release of our Middle East groundwater study, and just prior to President Obama's visit in March, a few members of our research team made a 'water diplomacy' tour of Israel, Jordan and Palestine. Our goals were to raise awareness of our findings, to build and share them via multi-lateral collaborations, and to initiate capacity building efforts to train students and researchers in the use of the satellite-based methods that we have developed.

At that time, I wrote a post encouraging President Obama, and by extension, Secretary Kerry, to include water issues in their peace-building and diplomatic efforts in the region. If water issues can be as destabilizing as they are proving to be in Syria, then it stands to reason that their peaceful resolution -- and the associated water, food and economic security that will ensue -- will have the opposite effect.