If you're of a certain age, you probably remember water beds. Perhaps your parents owned one when you were a kid and you have vague, nausea-inducing memories of being lulled to sleep on a huge mattress full of water. Or maybe you owned a water bed yourself, because, well, at the time you thought it was the coolest thing around.

Whatever the reason, water beds were definitely the thing to have in the '70s and '80s, so we decided to revisit this beloved relict for a better understanding of why so many of us wanted them.

The water bed was invented in 1968 as a thesis project.

Charles Hall invented the water bed for his Master's Thesis project while he was in design school at San Francisco State University. And even though the water bed's popularity has declined, Hall told SF State Magazine that he still only sleeps on water beds. "In each house I have a water bed," he said. "And you know what? I wouldn’t sleep on anything else. They are the most comfortable bed around."

In a 1986 New York Times article, the water bed is described as "filled with up to 250 gallons of water and who knows how many tons of sexual promise." The Times also cites an advertisement from 1970 that read, "Two things are better on a water bed. One of them is sleeping."

Of course Hugh Hefner reportedly had one or two water beds.

Hall eventually set up a studio where he handcrafted water beds for clients. He said he made one for Hefner that was "upholstered in green velvet." And TIME reported in a 1971 article that "Playboy Tycoon Hugh Hefner has one—king-size, of course, and covered with Tasmanian opossum."

Filling them up was quite a process, and they were really heavy.

The TIME article describes how water beds would arrive empty and that the owners were responsible for filling them up. Manufacturers advised filling them using an outdoor hose or a bathroom faucet and gave some important advice: "Wise owners will also pour in a healthy slug of Clorox to ward off the formation of algae." But, get this: A full king-sized water bed reportedly weighed 1,600 pounds!

Water beds were so cumbersome that some women who married men with water beds often joke about how they married both the man and the bed. Celeste Boboltz, the 53-year-old mother of a HuffPost editor, says, "I 'married' into mine. I think [my ex husband] would say he got it because it was a novelty. We were living in California at the time, and they were popular there in the '80s."

There are horror stories about getting the mattress filled, too. A parent of another HuffPost editor recalled the time his cat punctured holes throughout the entire bed. "It took a whole day to fill it up," says Bill Jacques. "Then the cat promptly walked over it and her claws left a sprinkling trail of mini geysers. So I spent another whole day emptying the water and applying patches."

They were banned on some college campuses in the '70s and still are at some.

Makes sense -- can you imagine moving into your freshman dorm only to find the space flooded with water from a set-up gone wrong?

Water bed popularity soared in the late '70s and into the '80s, but quickly declined by the '90s.

The LA Times reported in a 1989 article that water beds were a $2-billion-a-year industry. But by the '90s, their popularity quickly declined. In 2013, waterbeds held less than five percent of the mattress industry.

But they are still on sale today. 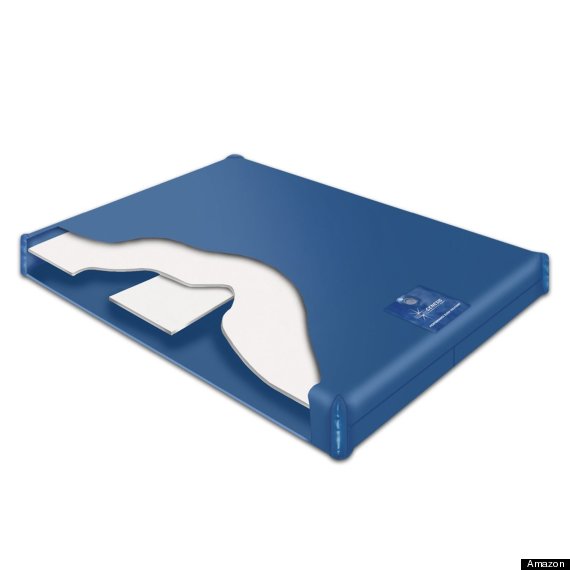 That's right. Water beds may not be a "thing" anymore but they are still for sale. Amazon sells the "InnoMax Genesis 400 Gentle Wave King Waterbed Mattress" for only $101.74. It boasts "wave reduction" and a "weightless feel." Oh, and you get a 20 year warranty.