Are you experiencing pain, illness, economic problems and severe stress due to your acute and chronic water problems? Are you a victim of the new water cycle: hurricanes, flooding, pipe breaks, toxic blooms, boil orders, salt water intrusion, severe contamination and droughts? This is not your grandparents' water cycle. You learned about it in school -- "the hydrologic cycle" -- and unlike resources like oil, water is considered to be a "renewable resource." But humans are now coupled to the water cycle and have modified this global resource which is necessary for all life on earth, where usable and clean water are becoming scarcer.

I very much enjoyed Mr. Davies "Water Cycle" video. At least this version of the cycle shows the atmospheric water, formation of clouds, all types of precipitation (rain, snow, sleet, fog), addresses ground water infiltration/percolation (in addition to the water in lakes, rivers and the ocean) even includes storms (a hurricane) and shows people interacting with the cycle. This coupled human water cycle will be a challenge for all of us on this earth and has been referred to by many as a looming "water crisis."

CLIMATE IMPACTS ON THE WATER CYCLE: It is clear that humans have now affected the earth's very large global climate system with a significant influence on water and the water cycle. This has changed the amount of water that returns as precipitation, where "how much" is important for flooding and how fast it comes. Predictions are that parts of the United States will become drier and other parts will become wetter. This summer the focus was on the drought that spread widely across the country affecting not only water supplies but food security. A new assessment has shown that over the last 60 years global droughts have increased by about 0.8 percent(1). More recently, however, all eyes were turned toward the east coast as we watched with horror as Hurricane Sandy brought huge amounts of water that rushed with a dramatic force into streets, subways and homes. Floods remain the number one disaster globally, causing loss of life, economic damage and illnesses(2). The immediate impact on life and well being, especially with a storm like Sandy, is clearly visible, but the long term concerns are associated with water pollution. Untreated sewage containing billions of bacteria, parasites and viruses are entering waterways and impacting water quality. During the storm 18.3 million gallons of raw waste gushed into a creek, a tributary of the Nansemond River, eventually closing shellfish beds; 500 million gallons of raw sewage every day was flowing into Newark Bay and more than 12 municipalities in New Jersey issued boil orders for the drinking water, but if you don't have power, what will you do? How will you gain access to safe water? Can we adapt our cities, sewage systems and agricultural schemes through water infrastructure to prevent and mitigate these ill effects? Maybe, but we need to be thinking about these issues, as my conclusion is that both quantity and quality will be affected under this "new water cycle."

GROUNDWATER LOSES: Our aquifers and wells are not going to be spared as part of the new water cycle, which will impact our agricultural systems, coastal communities and river flows in general. Intensive groundwater extraction (which has a history of only about 50 years) is led by agriculture, and losses are associated with this overdraft as we pump out more groundwater than is recharged, thus dropping the water table. The Wells are going dry, even in places like Michigan, where moving from rain fed agriculture to irrigation in the southwest of the state has led to a drop in the available water from key aquifers. And it is not just quantity; the quality of water under dry conditions shows that the groundwater contribution to our rivers here in Michigan is laced with human fecal pollution markers eventually emptying into one of the Great Lakes. Sea level rise and salt water intrusion also exacerbate groundwater conditions in places like California. This is a global issue that threatens the global food market and the benefits to billions of people around the world. Can we use groundwater in a sustainable way while feeding the future? Can we enhance recharge? Maybe, but it is my opinion that this hidden water resource needs to be brought to the top of the list for vulnerability assessment and protection under the pressures of the "new water cycle."

WASTEWATER AND WATER RECYCLING: One thing is for sure: water does move in a cycle and we reuse it all the time. Even with 20 percent of the surface freshwater in the Great Lakes, the goal is to keep return flows (water that has been used by communities and industries) inside the basin. The largest diversion of water allowed (one billion gallons of water per day) is the wastewater from Chicago, which is now pumped by reversing the flow of the Chicago River eventually to the Mississippi, instead of its natural flow to Lake Michigan. Early in the history of this grand city, one of the greatest engineering feats ('Civil Engineering Monument of the Millennium,' American Society of Civil Engineers) was the building of the Chicago Sanitary and Ship Canal. This was done as a public health measure as waterborne typhoid, a serious disease, was then affecting between one person in every 500 to 1,500. Typhoid in the United States disappeared as the treatment of drinking water and control of wastewater were implemented.

The widespread use and unplanned reuse of wastewater is indicated by the pervasive appearance of pollutants like viruses, Giardia and pharmaceuticals in our water supplies. In countries like Singapore and in water-stressed states (CA), however, planned water reuse is part of the management approach to address both quantity and quality under the "new water cycle." Advanced treatment takes care of pathogens and emerging chemicals of concern and the water can be used for irrigation and even for drinking water. About 35 billion gallons of sewage are produced each day in the United States and only five to six percent are reused. Can we improve our reuse of water? Can we enhance our wastewater treatment to produce water fit for beneficial purposes? Maybe. I believe that more water quality testing, better wastewater treatment and acknowledgement of this recycling is needed. 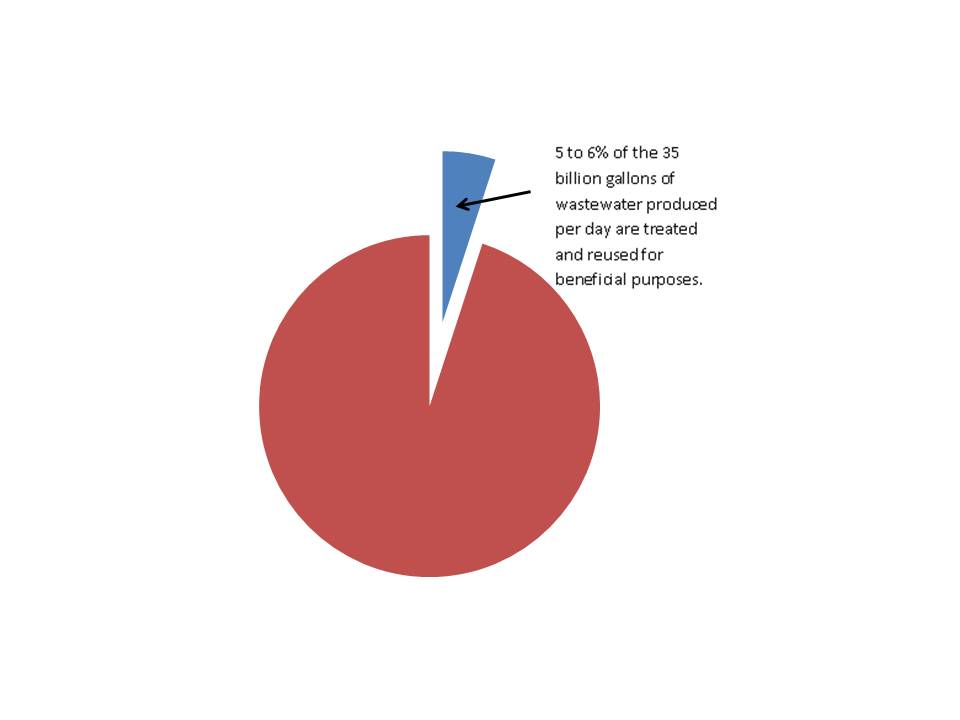 A NATIONAL WATER COMMISSION IS NEEDED: Over-exploitation and manipulation of one part of the water cycle cannot be done without influencing all parts of the cycle. Our attention span to focus on water problems has been described by Dr. Robert Glennon as the hydro-illogical cycle.

We need a national commission to address this new water cycle, we need better science, better technology, better infrastructure and better communication. From my perspective, U.S. engineers and scientists have the capacity as well as the desire to address the nations and world's water resources constraints under this new coupled human water cycle.

I am a water microbiologist that works at the interface between public health and engineering.