Say you just got off a plane at the Seattle-Tacoma airport and are feeling thirsty. You head for the nearest water fountain and are confronted with this: 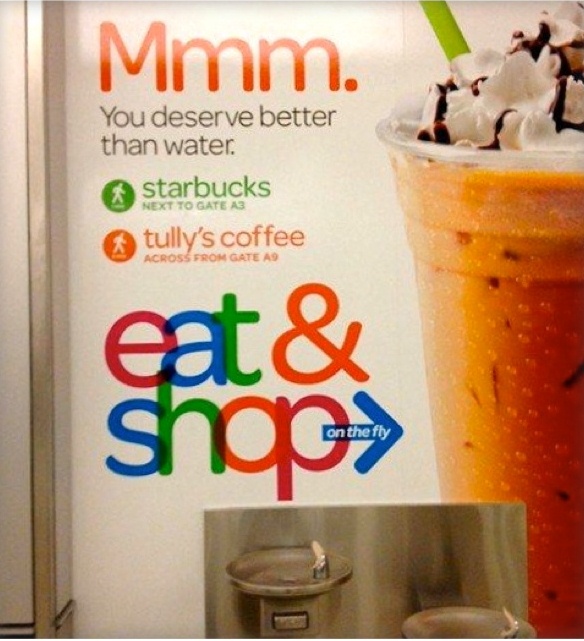 I'm not quite sure which whipped cream-topped beverage, drizzled with sugary syrup, beckons from the billboard. It might be a Starbucks Caramel Frappucino, packing 410 calories, 64 grams of sugar and 15 grams of fat into one 16-ounce drink (according to Starbucks' online nutritional menu). Or perhaps it's Tully's Chai Bellacino which gives you 410, 600 or 810 calories, depending on whether you choose a tall, grande or veinte (according to the Tully menu). Whatever it is, it's a whole lot weightier than water and is certainly sweeter than water. But better? Not a chance.

Across the country, there's a growing realization that sugar-laced drinks are adding huge quantities of fat and calories to the daily diets of millions of people, especially children, compounding America's problems with health and weight. Soda and beverage marketers never seem to rest in pursuing what former Coca-Cola marketing executive Todd Putnam said was the company's ultimate goal: "share of stomach." That, Putnam says, is the actual term Coke executives themselves used to employ. The company's agenda, he told the Washington Post, was to find ways to "drive more ounces into more bodies more often."

The results of this campaign are clear: Americans today consume about 278 more calories a day than they did in the mid-1970s and almost half of those calories come from sugary drinks, according to recent studies. Yet the beverage industry keeps working hard to entice people to consume drinks that provide no nutritional value and boost their risk for developing unhealthy conditions like diabetes. According to one report, the industry spent $948 million advertising sugary drinks last year, as we discussed in the video we released last year, "We're Not Buying It: Stop Junk Food Marketing to Kids."

Here's an airport billboard we like a whole lot better: 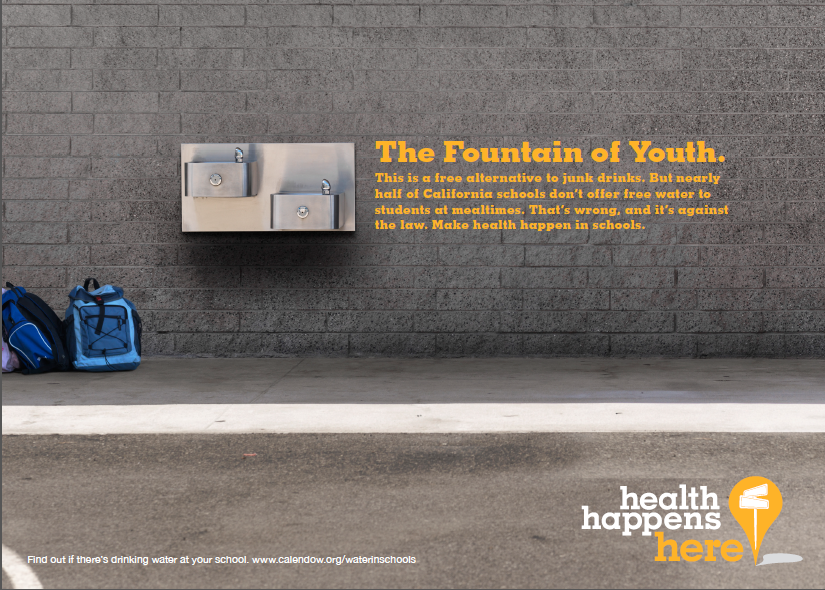 Our friends at the California Endowment put this billboard up at the airport in Sacramento because they "wanted policymakers (who fly in and out of the state's capital) to be aware of these issues." The Endowment, a statewide health foundation with a mission to build a stronger state by expanding access to affordable, quality health care to underserved communities, has launched a campaign to make sure schools provide drinking water at mealtimes as an alternative to sodas, juice drinks and the sugar and empty calories they provide. You'd think water would be universally available to children eating lunch but amazingly, that's not the case. A 2009 survey by California Project Lean found that 40 percent of California schools don't offer free drinking water. Of course, it's not just kids who would benefit by drinking more water and fewer sodas or Frappucinos. As the Project Lean paper noted, "There is a sizable public health benefit to encouraging water consumption more broadly across the whole population, in all settings, and at all times."

We all deserve water and the more we drink it, the better. It's time to teach our children and ourselves that when it comes to quenching thirst and hydrating the body, nothing beats good old H2O.

It turns out the water-fountain billboard replaced another that the Endowment previously displayed at the Sacramento airport, which graphically displayed the huge variations in life expectancy that are influenced by geography, health and wealth. And you can bet that what children drink -- and don't drink -- has an impact, along with many other factors, in that equation. Here's a picture of that billboard:

Three pictures, worth at least a veinte's worth of words.