Beneath their rugged exterior, some Martian rocks could be hiding life, scientists suspect. An examination of data gathered by NASA's Mars Exploration Rover Opportunity reveals deposits that, on Earth, are only created by water moving through the rock.

"There are plenty of places on Earth where organisms live in places where water is flowing through fractures in rock," lead scientist Steve Squyres of Cornell University told SPACE.com. "That's definitely a possibility at this location."

Opportunity also turned up evidence of hot, moving water within the rocks, likely caused by the impact that scooped out the crater, Odyssey.

Slipping through the cracks

In August 2011, Opportunity completed a three-year journey to Endeavour, a 14 mile (22 kilometer) crater formed in the early history of the planet.  The Rover studied various kinds of rocks. [Photos: The Search for Water on Mars] 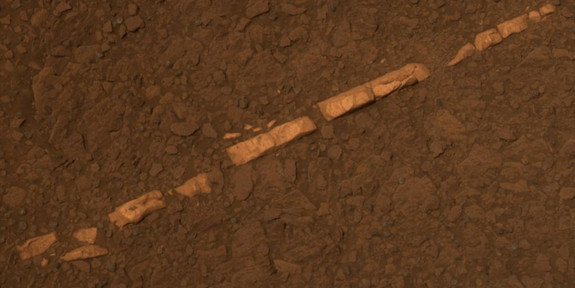 An examination of the small rocky outcropping known as Homestake revealed mineral deposited created by the flow of water. The cracks within this rock could potentially host life. Credit: NASA/JPL-Caltech/Cornell/ASU

One of the outcroppings, Homestake, boasts evidence of watery environments in the cracks within the rocks. A flat ridge only a third of an inch (1 centimeter) tall and 20 inches (50 cm) long, Homestake contains deposits of a sulfate mineral known as gypsum within the rock.

Water, slowly leaking from the ground into the rock, carried sulfate with it. As fractures in the rock opened up, the gypsum was deposited inside.

"Gypsum veins are common in all sorts of settings on Earth," Squyres said. "They always form when water flows through the rock and precipitates out gypsum in the fractures."

Life could thrive within the cracks, Squyres said.

"Organisms can live in fractures of rock, as long as there's water present," he said. 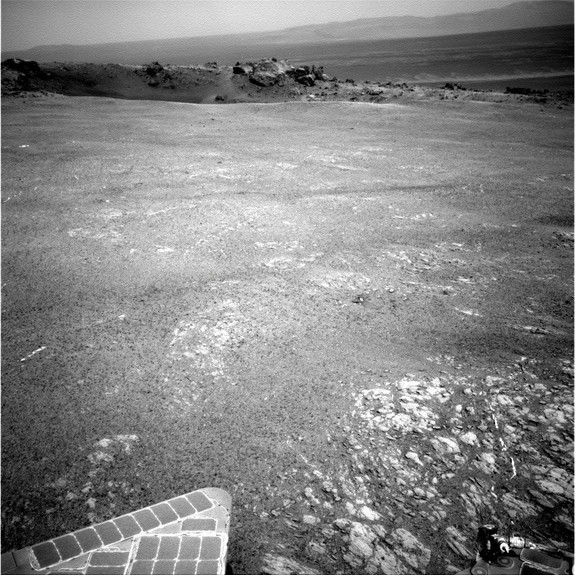 The smaller Odyssey crater, perched on the rim of the giant crater, Endeavour, was one of the sites examined by Opportunity.

Squyres went on to caution that there is no evidence of life in Homestake itself, but "the watery conditions that would have been necessary — the requirement of water being there — was present."

Turning on the tap

The international team also examined rocky outcroppings sent flying when a second impact formed the smaller Odyssey crater. Only 62 by 75 feet (19 by 23 meters), the elliptical crater rests on the rim of Endeavour.

Opportunity studied an outcropping known as Tisdale, and found it contained zinc, a chemical element often associated with hydrothermal activity.

"If you go to zinc mines on Earth, they're generally in places where hydrothermal processes have deposited zinc," Squyres said.

Such places tend to be near volcanic activity, or other processes in the crust that heat the water around it.

On Mars, the movement of hot water was likely jumpstarted by the blow from the rock that formed Odyssey.

"A crater that size involves a lot of energy," Squyres said.

When the large body gashed the surface of the Red Planet, it likely heated water already contained within the crust or at the surface.

Such water would only been moving temporarily, however, and would be unlikely to create long-term habitats for life.

The impact-driven movement of water is probably unconnected to the gypsum-rich rocks and their habitable environments, Squyres said.

Research on the outcroppings was detailed May 3 in the online version of the journal Science.