"Her career is flushed down the toilet." That was my story in News of the Weird. Even my mom read it! I study waterborne disease and water pollution. I am a water scientist and my laboratory is the vast array of rivers, lakes and aquifers on this blue planet. I care about water quality and how this affects our health and our well being. Pollution continues to impact surface and ground waters, our drinking waters as well as coastlines and recreational waters.

There are an estimated 19 million waterborne illnesses per year due to the contamination of drinking water systems in the U.S., with 5.4 million illnesses from groundwater and 13 million illnesses from surface water systems. That includes diarrhea, respiratory infections, skin infections, meningitis and even chronic conditions like myocarditis, kidney failure and neurological problems, including joint pains. Not only are we getting sick from our water but we continue to have community outbreaks (the plane crashes for the water industry). According to the Centers for Disease Control in the last national summary (2007-2008), there were 48 outbreaks in 24 states caused by bacteria, viruses and parasites. Our work found a new pathogen, Arcobacter, which was associated with an outbreak in South Bass Island, which is now being reported in 75% of the water samples from the Lake Erie. This summer, the Legionella outbreak in Quebec City is being described as one of the deadliest in Canada in 25 years and the disease is also rearing up in Chicago, with reportedly three deaths so far.

Illness due to exposure to polluted recreational waters is also a concern, not to mention a financial burden on coastal communities felt with each beach closure. EPA reported 43% of the beaches monitored had closures and/or advisories posted in 2011. For the Great Lakes beaches this means rough estimates of $228,000 losses per day per closure. It is estimated that there is a 10% chance of getting sick when using these beaches and recent studies have found that even boaters who recreate on polluted waters are coming home with diarrhea, skin and eye infections. 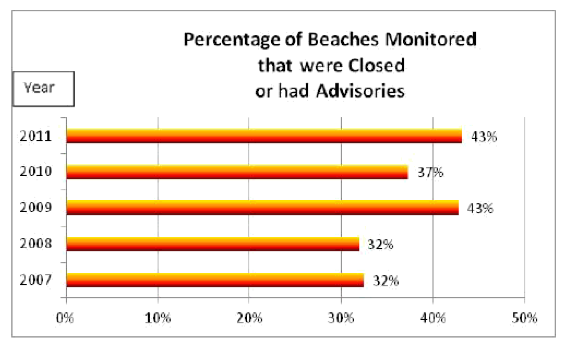 Most but not all of the microbes in water causing these illnesses are coming from human sewage and animal waste, and certainly toilets were in the news again when the Gates Foundation held a competition for a new design to meet the needs of the world's population who have no access. That is the developing world's problem right? Wrong.

Consider this: 44% of the global population (7 billion people) lives within 150 km (93 miles) of the coastline (that is 3 billion people who flush or dispose daily and send fecal pollution into the environment and eventually into our waterways). The world has 356,000 km (221,208 miles) of coastline, the USA has 19,924 km ( 12,380 miles) of coastline and the Great Lakes, where I live, has 15,043 km (9347 miles) of coastline. Our water infrastructure grade is a D in the USA, according the American Society of Civil Engineering. In Michigan, in addition to older sewage systems and combined sewer overflows, we have 1.7 million septic tanks, and health departments have found 30% failures during inspections at the point of sale; our research has found increasing human sewage markers in the water associated with the number of septic tanks in watersheds. All of these factors are risking our water quality and our health.

We know land use, water infrastructure, populations and climate are all interlinked exacerbating the water quality problems and compromising our health. For drinking water, high rainfall is in part a cause of these community disease outbreaks. What about these warm temperatures and droughts? What will 2012 have brought us as we begin to tally up the costs? As the flooding continues due to Tropical Storm Isaac down south, let's be sure we pay attention to health as emergency workers respond to help those victims impacted. Let's curtail infectious waterborne diseases that occurred during Katrina, including Vibrio vulnificus, where exposure can occur just by walking through the flood waters where salt water has mixed with fresh water. This bacterium, like many waterborne diseases, can cause a variety of symptoms associated with the infection whether you ingest the contaminated water (vomiting and diarrhea)or are exposed through the skin (fever, chills, skin blisters/lesions and even death).

Are these problems increasing? My sense is yes, but in these tough economic times, many public health and water testing programs are being cut and the ability to monitor our water and our health is limited. Understanding water quality is imperative for our future if we are to make the best decisions and investments in keeping our waters in the U.S. and on this planet clear, clean and safe.

I am a water microbiologist that works at the interface between public health and engineering.