I have never seen anything like it. It happened the morning after the first rains of the season that recently drenched Nairobi, Kenya. I was on my way to my first appointment but halfway through my journey, not far from the Kenya Wildlife Service headquarters, when the road I was on was blocked by a wall of suds, white and fluffy as if spewing out of an errant giant steam carpet cleaner, was slowly swallowing the four-lane highway before me.

This soapy surge was well over two stories high in places. It rose from the fast-flowing creek that runs below the road, whose waters were now a mounting froth spilling over the banks. The air smelled of chemicals. My eyes watered and in my mouth I tasted a residue of a suds.

I quickly snapped a few photos of this disturbing sight and shot a little video. I didn't dare linger.

I later found out that this suds-engulfed creek flows right through Nairobi's biggest slum, Kibera, where tens of thousands of people depend on the waterway for a host of daily needs. The creek itself eventually filters through a national park filled with hippos, crocs, buffalo and lions. The clouds of white froth I had witnessed were probably caused by a mix of phosphate run-off (fertilizer and sanitation waste), detergents and industrial effluents in the stream whipped up by the rainstorm. And a little research shows that it happens all the time in streams across the world -- from Canada to Indonesia.

A scene like this can't help but make you grateful for the Clean Water Act in the United States, which just turned 40 this year. A signature piece of legislation that passed with support from both sides of the aisle, it helps keep our waterways clean for both wildlife and humans alike by penalizing polluters.

The world is not short on freshwater -- rather, too many of our water sources are now polluted and unavailable for safe use without extensive, expensive treatment (just check out the graphics compiled by Pace Academy for Applied Environmental Studies for its .007 Campaign.) Imagine, in a country like Kenya where water is a precious commodity for urban residents, a creek running through the city is used not for consumption, but for unintentionally hauling away waste!

But new legislation in African countries may not be the solution.

"Kenya is not short of legislation. We are stars in the region for churning excellent policies and laws," says Charles Oluchina, the director of The Nature Conservancy's Kenya program.

Kenya, like many countries, has the Environmental Management and Coordination Act (ECMA) and The Water Act. The trouble is a lack of focus and, crucially, funding to implement and advance legal provisions.

This almost happened to our Clean Water Act as well. After initially supporting the bill, President Nixon balked at the perceived cost and vetoed it, calling the effort "budget busting." His veto was later overturned by Congress and today, most of our urban creeks and rivers are experiencing a revival that adds enormous value to urban residents in America who no longer have to hold their noses when crossing a river, have a ready playground to enjoy, can trust their drinking water is safe and need never fear a suds tsunami on their commute to work.

Well-meaning legislation is clearly important to keep our urban creeks, streams and waterways clean but perhaps more so is the funding and political will to enforce laws that already exist and provide for good urban planning that keeps waste out of water. Water is simply too valuable to be used as a carrier for the remains of our urban civilization. Its importance for life, after all, is truly irreplaceable.

More images of the "suds tsunami" below:

PHOTO GALLERY
Amazing Images of the Suds Tsunami
Download
Calling all HuffPost superfans!
Sign up for membership to become a founding member and help shape HuffPost's next chapter
Join HuffPost

A Tsunami of Suds
Amazing Images of the Suds Tsunami 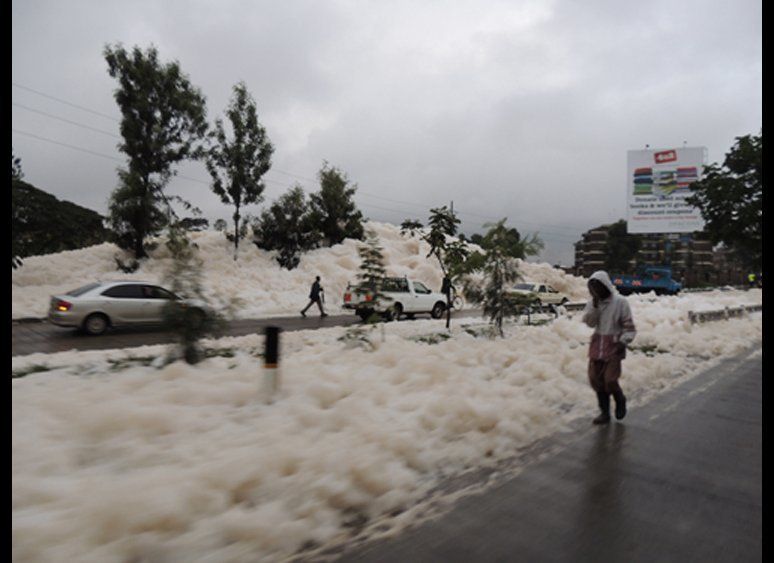