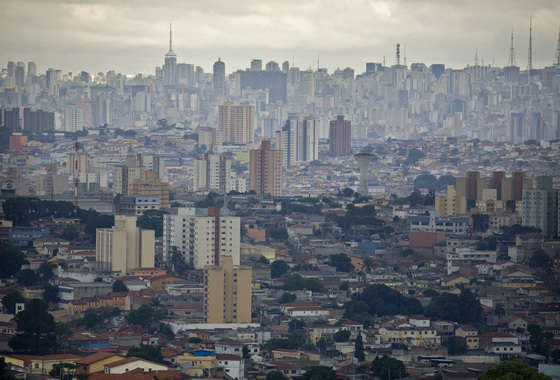 Sao Paulo, Brazil with the credit to Scott Warren

There's good news and bad news for cities. The good news is that a new study of more than 200 global cities published this week in the Journal of Global Environmental Change found that fewer large cities than normally reported face water stress (defined as a city using more than 40 percent of their available annual supply), when taking into account water piped in from distant watersheds. The bad news is that even using this new methodology, 1 in 4 cities, accounting for more than 5 percent of global GDP, still face water stress. This is a serious challenge as more than 2 billion people will be moving into cities in the next 30 years, with regions such as Sub Saharan Africa projected to double their urban population while urban water demand quadruples.

Water powers every element of urban life. From drinking and cleaning, to transportation and energy production, to food and manufacturing, it all runs on water. The 200 cities included in the analysis use 668 billion liters of water a day -- 504 billion liters of which come from surface sources. That's enough water to fill 200,000 Olympic swimming pools a day.

Cities have long looked beyond their immediate water basins to access clean water for their population (one of the earliest examples of this are the Roman aqueducts that piped water from the Alps to Rome). Today, 12 percent of large cities use inter-basin transfers for their water supplies.

Cumulatively, the 200 cities in the study transport water over 27,000 km every day, with some cities in China, Central Asia and Mexico relying on sources as far as 100 km away. Laid end to end, all of the canals and pipes used by the cities in the study would stretch halfway around the world. This figure will increase by more than 10% when China's $68 billion South to North Water Diversion Project comes online, which will link China's four main rivers and divert water from the south of China to population centers in the north.

This search for water has consequences for city planners and managers. While large cities occupy only 1 percent of the Earth's total land surface, they draw their water from almost half of that surface. This highlights the need for cities to think beyond their borders for planning and investment purposes. What happens on the land in the watersheds form which they are drawing water has a direct impact on water availability and quality.

The tradition response of traveling greater distances to meet increasing demand for water may be problematic as urban growth shifts population centers from developed to developing countries. The journal article points out that cities with low per-capita income ($12,616/person) use sources that are on average 57 km away. Today's fastest growing cities tend to also be the poorest, and are will struggle to buy their way out of water stress without large infusions of funding.

As we move into the urban century, water is likely to be one of the defining issues for cities. Getting it right will be critical to meeting public health and economic development goals. Understanding where cities' water comes from and what it takes to get there is an important first step.

___________
Adam Freed is the Deputy Managing Director of The Nature Conservancy's Global Water Program and a Lecturer at Columbia University. He previously served as the Deputy Director of the New York City Mayor's Office of Long-Term Planning & Sustainability.