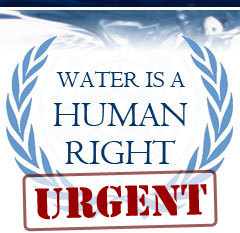 A jury trial is underway in Detroit for human rights activists arrested for blocking trucks which were going to cutoff water to low-income families.

On July 18, 2014, dozens of people successfully blocked the trucks of the Homrich Inc., a private wrecking company that the City of Detroit contracts with to carry out water shutoffs. The trucks were leaving to cutoff water for Detroiters who were more than $150 past due on payments. After an eight-hour blockade nine people were arrested.

Those on trial said civil disobedience was their only option to address the grave public health crisis of mass water shutoffs, since the City of Detroit was under emergency management, which effectively strips all elected officials of decision-making power. One of the people on trial is Bill Wylie-Kellermann, pastor of St. Peter's Episcopal Church in Detroit. He told The Detroit News "It was, at the time, the last vestige of democracy in the city."

Defendant Marian Kramer of the Michigan Welfare Rights Organization and Highland Park Human Right Coalition highlighted what she sees as the irony of the City criminally charging and prosecuting defendants for nonviolent defense of Detroiters' right to water. "The true crime is that thousands of people who are struggling to pay their water bills are being deprived of a basic necessity of life. Instead of implementing the Water Affordability Plan, which would tie water rates to income and which Detroit City Council supports, the Mayor chooses to shut off the water of thousands of Detroiters. Who is the real criminal?"

Detroit announced last month it has already cut off water to more than 16,000 residences and warned another 49,000 that their water will be shut off soon. People whose water has been shutoff are living in homes using buckets of water from neighbors and family.

In October 2014, two United Nations experts insisted Detroit restore water to people unable to pay their bills saying failure to do so is a violation of the human rights of residents. The City's response to the UN was dismissive. "This is the same organization that's trying to achieve world peace -- it's not going to happen."

A coalition of organizations has created The Peoples Water Board which advocates to place a moratorium on the water shutoffs, restore service to those whose water has been cutoff and to implement a Water Affordability Plan. The WAP was created by economist Roger Colton and the Michigan Welfare Rights Organization who run a Water Rights Hotline: (844) 42WATER [844-429-2837]. People interested in providing help to families facing cutoffs can contact We The People of Detroit.

There is widespread resistance to these human rights violations. There is good news. The Legislative Policy Division staff of the Detroit City Council recently issued a legal opinion saying a water affordability ordinance which would adjust water rates based on income levels can be legally created.