Just like ocean explorer David Gallo, I am also often astonished by the incredible diversity of the biology and geology of Earth's oceans. There really is a whole other planet down there, waiting to be discovered. I'm a planetary scientist, and in my field the Earth's surface, oceans, and interior represent the training grounds and jumping off points for the exploration of the other worlds around us. As such, while I'm astonished by the diversity of Earth's oceans, I'm absolutely floored when I stop to think that our beautiful blue ocean is only one of perhaps a half dozen or more oceans on other worlds in our solar system, and only one of probably millions (or more) oceans on other Earth-like planets in our galaxy. Oceans abound!

Where are these other oceans in our celestial neighborhood, and what do we know about them? Planetary scientists have solid evidence that there are two among the large moons of Jupiter -- on Europa and Ganymede -- and some evidence that there may be another on Jupiter's large moon Callisto, and two more among the large moons of Saturn -- on Titan and Enceladus. Europa's was the first to be discovered, with its deep ice-covered ocean heated from below by the tidal energy of Jupiter and its other large, nearby moons. In fact, observations from the Voyager and Galileo space missions suggest that the salty ocean on Europa holds at least twice as much water as all of Earth's oceans combined! Warm liquid water, "geothermal" energy sources, and a putative abundance of organic molecules like those found on outer solar system comets and asteroids even suggest that Europa's ocean might be a habitable environment for life as we know it.

Imagine trying to explore Earth's oceans if our entire planet was covered by tens of kilometers or more of thick ice -- that's the challenge facing NASA and other space agencies as we strive to learn more about these exotic aquatic places.-- Jim Bell

Europa's neighboring moon Ganymede -- the largest moon in the solar system (larger than the planet Mercury!) -- could also have a subsurface ocean, based on gravity and magnetic field data that are consistent with the presence of a thick, conducting layer of fluid (likely liquid water) under the icy crust. A new European Space Agency mission to Ganymede will launch in 2022 to try to find out for sure. Deep layers of liquid water -- subsurface "oceans" -- have also been tentatively discovered on Callisto and on Titan based on detailed analysis of their gravity and topography. For Titan, the possible presence of a deep liquid water ocean beneath surface seas of liquid methane, ethane, and other hydrocarbons would make that small planet an extremely more diverse, and strange, ocean world! And even Enceladus -- a tiny moon of Saturn that only spans the distance between Boston and Philadelphia -- has been found to be spewing jets of fizzy water and organic molecules from cracks in its icy crust, leading planetary scientists to suspect the presence of yet another subsurface ocean there. What heats the interior of such a tiny world to melt its icy interior is still a mystery.

The surfaces of all these worlds are frozen over with thick crusts of ice. So the catch is that we've only "seen" their oceans indirectly, by studying the icy landforms on their surfaces, or by inferring details about their watery interior layers from magnetic or geochemical measurements. Imagine trying to explore Earth's oceans if our entire planet was covered by tens of kilometers or more of thick ice -- that's the challenge facing NASA and other space agencies as we strive to learn more about these exotic aquatic places.

It's also even possible that our nearest planetary neighbors, Mars and Venus, once had seas or oceans on their surfaces long ago. Some of that evidence is preserved on Mars as possible ancient shorelines and salty mineral deposits, although there is still much debate about whether there really was enough water there for the planet to have had an ocean as opposed to just smaller lakes and seas. But any such possible oceanic evidence has long been destroyed on scorchingly hot, dry, lava-covered Venus, where the "evidence" for a past ocean comes from the stunningly dry state of the atmosphere today (suggesting a lot of loss of water), and planet's overall similarity to the Earth, especially early in the history of the solar system (suggesting that it might have started with a lot of water).

Meanwhile, astronomers and planetary scientists are busily discovering hundreds of other planets around nearby Sun-like stars, including the first examples of Earth-sized worlds that are within the so-called Habitable Zone around their star -- at temperatures where liquid water could be stable on their surfaces, if the environment is indeed Earth-like. How many of those worlds have oceans as well? And how many of those alien oceans harbor strange and exotic alien life forms?

Earth appears to be just one ocean world among many. We should rightfully delight in and be astonished by the beauty and diversity of life within our own precious oceans. Now, we can also look forward to fathoming the depths of other ocean worlds around us, and being astonished by what we find there, too. What creatures might dwell in the warm depths of Europa, deep underneath the organic goo of Titan, or in the tide pools of some other blue planet hundreds of light years away? Won't it be fun to find out!

Jim Bell is an astronomer and planetary scientist at Arizona State University and is the President of The Planetary Society. Jim is an occasional science blogger for the Huffington Post, and his books like "Postcards from Mars", "Moon 3-D", "Mars 3-D", and "The Space Book" have helped to enable glorious visual tours of the solar system.

Oceanography Moons Of Jupiter Astronomy Mysteries Of The Deep... Revealed Water
This Blogger's Books and Other Items from... 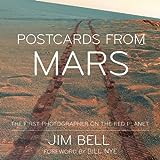 Postcards from Mars: The First Photographer on the Red Planet
by Jim Bell

The Space Book: From the Beginning to the End of Time, 250 Milestones in the History of Space & Astronomy (Sterling Milestones)
by Jim Bell