OK, put away your guns. We're not talking shooting wars, at least not yet, at least not in the U.S. We're talking politicians shooting off their mouths, political wars, and court battles. But water is serious business.

But it is a different story around the world, where there is a long and sad history of violent conflict over water. At the Pacific Institute we maintain the Water Conflict Chronology, documenting examples going back literally 5,000 years.

As others have pointed out, water can be -- and often is -- a source of cooperation rather than conflict. But conflicts over water are real. And as populations and economies grow, and as we increasingly reach "peak water" limits to local water resources, I believe that the risks of conflicts will increase, even here in the United States, and not just in the water-scarce arid west.

Recently, tensions over water bubbled up in an unlikely spot: the Georgia-Tennessee border. There has been a bit of a border dispute in this region for a long time. Nearly two hundred years actually. Until recently, no one paid much attention to it, and it hasn't been an issue with any particular salience or urgency. There was a flurry of attention around the issue during a severe drought in 2008, and then it died down again. Until now.

What is the issue? If the border can be redrawn (or "corrected" as Georgia puts it), it would give them access to the northernmost bank of the Tennessee River, and a new right to water resources that Georgia would now, desperately, like to tap to satisfy growing demands in the Atlanta region.

In mid-February, the Georgia House of Representatives voted 171-2 to adopt a resolution seeking to reopen the controversy and regain access to the Tennessee River. At the moment, Tennessee lawmakers are more amused than alarmed, but they also say they will act to protect their water from "Peach State poachers." An editorial in the Chattanooga Times Free-Press said, "We hope Atlanta can find an appropriate solution. But the river in our backyard is not it."

And recently elected Tennessee Gov. Bill Haslam pledged in his campaign that he would "protect our precious resources and will fight any attempt to ... siphon off our water."

This isn't the only water dispute involving Georgia. For decades, the state has been in a legal battle with Alabama and Florida over the shared Apalachicola-Chattahoochee-Flint river system (I can say that fast, out loud, but it took practice). That dispute has been before the U.S. Supreme Court for years.

And this isn't the only state-to-state water dispute in the U.S. to flare up in recent months. [For a hint of where to look for water tensions, take a look at Figure 1: the U.S. Drought Monitor.] The Republican River flows through the states of Colorado, Nebraska, and Kansas, but sharing the river has been a recurring political dispute for decades. In the latest chapter, the Special Master overseeing an agreement forged in 1943 recently rejected a request by Kansas to punish Nebraska for using too much water. Kansas asked for $80 million from Nebraska for violations of the Republican River Compact of 1943. The Special Master agreed that Nebraska farmers violated the compact in 2005 and 2006 and took 71,000 acre-feet of water too much, but only proposed awarding a payment of only $5 million. He also denied a Kansas request to shut off water for some Nebraska farmers along the river. 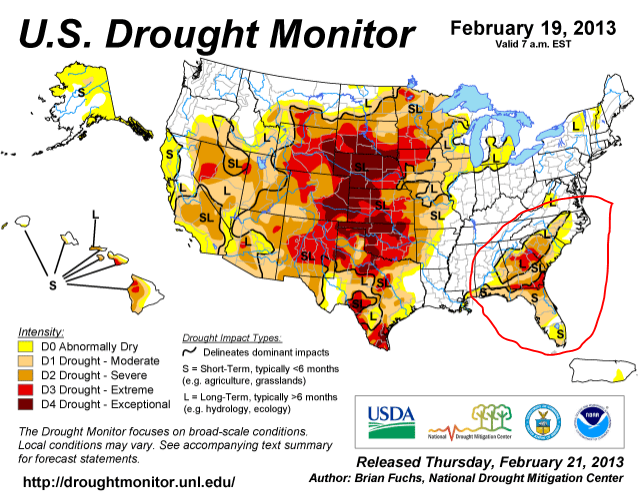 And don't get me started on the Colorado River, shared by seven U.S. states and Mexico, or the Great Lakes, shared by eight states and Canada.

The fact that these disputes in the U.S. head to court rather than the gun rack is good news. Similar disputes in India, China, and parts of Africa over access and allocation of water too often end in violence, injuries, and deaths.

Water wars don't have to be inevitable, but we're going to have to work harder at defusing tensions around the fair and equitable allocation of our limited water.