The line on waterboarding from the right-wing Hot Air blog reads as follows:

Goddamn. The author of this post, Bryan Preston, thinks we're being merciful by waterboarding terror suspects. Thank goodness, he says, that our officers haven't contemplated other, harsher treatments that leave lasting damage. Which officers? How harsh? Maybe he's suggesting something like this: 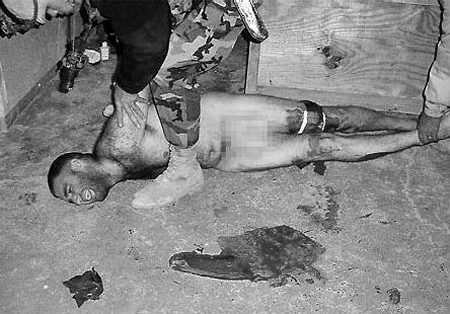 Our people would never contemplate something that harsh.

The comments under Preston's post are an education in the far-right's facile, myopic position on torture. The comments spell out the red-faced, foaming, poopy-diaper cowardice which has been so indicative of the right-wing since 9/11: the utter absence of dignity, honor and morality which the Bush White House has both exploited and fueled for too many years.

The Hot Air commenters believe that real torture is strictly the tool of our enemies. Real torture, according to commenter "locomotivebreath1901" is defined as:

"hammers vs. genitals, power drills to the eye balls and people who saw heads off."

"The mutilation, limb dismemberment, skin removal, gutting, burning, drilling that those animals do to our guys."

Of course some of these things are technically homicide and not torture. And the commenters aren't clear about how "our guys" will be treated by a future enemy who knows we torture their guys. But we get the point, however batshit screwy it might be. They're saying that Evildoer Torture can beat up our American Torture; therefore our Torture isn't really Torture. In other words, we would only be torturing people if we were either smashing their nards with hammers or killing them for real instead of merely pretending to kill them -- or accidentally killing them.

All of this is in response to former CIA interrogator John Kiriakou who told ABC News this week that waterboarding is necessary, because if we don't do it, there could be another attack.

"What happens if we don't waterboard a person, and we don't get that nugget of information, and there's an attack," Kiriakou said. "I would have trouble forgiving myself."

But how far do we go before the means no longer justifies the ends? All New Extreme Waterboarding? Hammer vs. genitals? At what point does the gothic horror of the American torture chambers outweigh that which they aim to prevent? The president and the vice president have said they will do whatever is necessary to keep us safe. But how far, when operating within a bubble devoid of accountability, will they go? The answer to this question could very well have been degaussed from those CIA interrogation videotapes.

It's clear from the historical volume and tone of the far-right's pro-torture language that most of the Bush Republican base and media, tanked up on paranoia and fear, would climb over each other to be the first to mandate that our interrogation officers let fly the hoods and electrodes; the feces and the dogs; the balls and the hammering -- you know... the Rush Limbaugh fraternity pranks.

As we have observed, there is practically no limit to the authoritarian reach of the commander-in-chief and his roster of interrogators during wartime, especially if the justifications for these policies are rationalized enough.

-What happens if we don't [flay] a person, and we don't get that nugget of information, and there's an attack. I would have trouble forgiving myself.

-What happens if we don't [strappado] a person, and we don't get that nugget of information, and there's an attack. I would have trouble forgiving myself.

-What happens if we don't [pear of anguish] a person, and we don't get that nugget of information, and there's an attack. I would have trouble forgiving myself.

If we permit waterboarding -- a technique during which the suspect literally believes he is going to die -- what won't we permit in order to keep the evildoers from killing us? Ultimately, there is no limit to the extreme measures which threatened and frightened human beings will allow -- especially human beings of the scared shitless species, like Hot Air's Bryan Preston or Michelle Malkin -- and it doesn't seem to matter if the threat is legitimate, exaggerated or fabricated for votes and polling bumps.

The popular far-right rationalization Either-We-Torture-or-We-Die has the potential to generate bumper-magnet support for just about anything -- even though it's disingenuous, nearsighted horseshit.

First, the blowback from this policy will make us less safe and more susceptible to an attack. Now and always. The blowback from Abu Ghraib alone has yet to manifest itself.

Secondly, given our extraordinarily enormous and expensive military-industrial and intelligence establishment, the ultimate safety of our citizens and cities appears to come down to... what? Torture? Sorry, no. If the shopping list for preventing a terrorist attack is a wooden plank, a hanky and a jug of water, I want my goddamn money back.

The reality is that the cost of doing business as a democracy is a certain level of danger. Freedom and liberty are, by their very nature, porous.

That's why, in the face of terrorism, we can't allow ourselves to acquiesce to unchecked executive power; invasions of privacy; torture; illegal searches; or warrantless eavesdropping in order to ameliorate the inherent dangers of a free and open society. This is non-negotiable and it's disgraceful that these authoritarian policies of the Bush administration have become, as John Kiriakou said, a matter of "national debate."

Your government is mandated by the Constitution, by international law and by basic human decency to vigorously defend our nation without resorting to torture or illegally invading sovereign nations or hammering vs. balls. Our government is supposed to be populated with smart and very serious people, yet we're expected to believe that they can't figure out how to prevent a terrorist attack without employing the villainous tactics of the Gestapo, the Spanish Inquisition or the North Vietnamese? Sorry, no. Again.

When they say they can't do without torture -- as the Bush Republicans have since 9/11 -- they're absolutely lying. What's worse is that if they can't come up with anything better than torture, they're lazy, incompetent and unimaginative. Even worse: they're sadistic and criminally insane.

But they know they can get away with this ongoing abuse of executive power because their supporters are the sort of redneck dittoheads who think it's somehow faggy to pursue our enemies within the bounds of American dignity and restraint.

To wit, one of Bryan Preston's commenters believes that anyone who opposes torture should "grow a pair." Tell me, anonymous "bones47" commenter who hides behind a pseudonym, which is ballsier: standing up for the rule of law and the Constitution in the face of danger or allowing irrational fear to abrogate everything that sets us apart from our enemies?