When was NASA's finest hour? Most would say, "The Apollo moon landing."

As a bit of an insider, I have a different take. NASA's finest hour, hands down, was the ill-fated Apollo 13 mission.

Two and one-third days into the nominal nine-day voyage, a ruptured oxygen tank left the spacecraft crippled, the mission in shambles, and the lives of three astronauts in jeopardy. Mission controllers, engineers, technicians and astronauts worked around the clock to stabilize a dire situation and work the impossible, bringing Jim Lovell, Jack Swigert, and Fred Haise home alive. 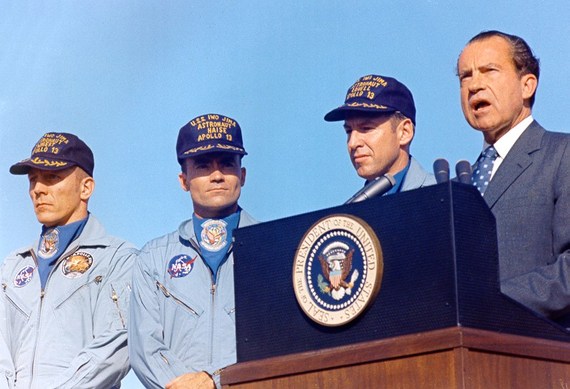 When, after five nail-biting days, the Command Module splashed down gently with the three haggard astronauts aboard, the world heaved a collective sigh of relief. To accomplish this improbable feat, NASA had worked miracles: using the Lunar Excursion Module as a lifeboat, stretching almost non-existent electrical power for days, jerry-rigging CO2 scrubbers from parts of unused spacesuits, and performing a delicate orbital correction on the dark side of the moon, out of contact with Mission Control.

Similarly, American democracy's finest hour may have been during a moment of grave constitutional crisis.

I was backpacking in Europe with my brother in August 1974 as the Watergate scandal came to a head. I recall like yesterday these headlines in a German newspaper, in the largest print font I'd ever seen:

I recall too the sense of shame I felt at the unprecedented resignation of an American president, that is, until a wise German put the whole episode into perspective for me. "You should be proud. The system worked. Your democracy deposed a president who abused power and not a drop of blood was shed."

Watergate sorely tested the constitutional safeguards set in place by the founding fathers. The system was strained and stressed to the hilt, but it held fast. And analogously to the rescue of Apollo 13, each facet of our democratic infrastructure performed its intended function to the utmost.

A hound-dog press relentlessly followed the money trail of those who burgled the headquarters of the Democratic National Committee at the Watergate Complex. The trail led all the way back to Richard M. Nixon's re-election committee and campaign slush fund.

Towering figures of high integrity then populated the U.S. Congress, on both sides of the aisle: Barbara Jordan, Sam Erwin, Daniel Inouye, Howard Baker, Jr., and Peter Rodino, Jr., to mention a few. When impeachment began to look imminent, these giants well understood that power must transition smoothly if the nation was to survive. Nixon's vice president and oratorical hatchet man, Spiro Agnew, was something of a scoundrel. In contrast, Gerald Ford, House Minority Leader, held the respect of congressional members of both parties. In the midst of the crisis, Agnew was prosecuted for extortion, tax fraud, and bribery, forcing his resignation. Ford was then sworn in as vice president. Congress' guiding hand had operated behind the scenes to position the benign Ford as Nixon's replacement should worse come to worse.

The judiciary and Supreme Court fulfilled their roles admirably too. Nixon's campaign manager and first Attorney General, John Mitchell, controlled the slush fund that had financed the Watergate break-in. Mitchell resigned in 1972 and later served time for conspiracy, obstruction of justice, and perjury. Eventually Elliot Richardson, a man of impeccable integrity, replaced Mitchell. Richardson soon appointed independent prosecutor Archibald Cox to investigate the Watergate allegations. When Nixon ordered Richardson to fire Cox on October 20, 1973, Richardson resigned in protest, precipitating the "Saturday Night Massacre," a cascade of resignations of conscience. A conservative at the time, I believed Nixon innocent until he ordered Richardson to sack Cox. The Saturday Night Massacre convinced me the president had a lot to hide.

As the crisis unfolded, it came to light that the president's conversations were routinely recorded. Cox subpoenaed the Nixon tapes; Nixon refused their release, flaunting "executive privilege." The matter went all the way to the Supreme Court, which, on July 24, 1974, unanimously ordered Nixon to release the tapes. What they disclosed -- despite the mysterious erasure of 18 crucial minutes of conversation -- guaranteed Nixon would be impeached and almost certainly convicted. With Congressional members of both parties telling him behind closed doors the jig was up, Nixon resigned 40 years ago tomorrow (Aug. 9).

If Watergate was arguably our finest hour, then certainly now is our worst, at least since the Civil War. Today congress is populated primarily (but not exclusively) by Lilliputians and demagogues, who have well earned their abysmal 6 percent approval rating. Impassioned by ideology but devoid of integrity, the House's partisan majority focuses exclusively on engineering the president's failure, regardless of the consequences for the country. To that end, they're now manufacturing a non-existent crisis, hell-bent on impeaching a president who has received little credit for his successes and has done nothing deserving of impeachment other than to appear "alien" to small-minded conservatives: an introverted black intellectual whose formative years were spent in Indonesia and Hawaii. Meanwhile the mainstream media is asleep at the wheel or fanning the flames of impeachment, and the Supreme Court's conservative majority has sold out the common man and woman to the interests of the powerful.

Those who would manufacture constitutional crises for purely political reasons would be well advised to study Watergate. It took the better angels of both parties to keep the nation from unraveling in 1974. Better angels are now endangered, and in the GOP, they're nearly extinct.