You may have once believed that swallowing a watermelon seed would ignite the growth of an enormous fruit inside your belly. So instead of ingesting, you diligently plucked out each individual seed before chomping into the juicy fruit. Or you kept an arsenal of seeds in the pocket of your cheek to use as spitting ammo against your older brother.

But these seeds will not bud fruit inside your body and they shouldn't be tossed or shot at an annoying sibling. Instead, they should be eaten. (Here's the catch: You shouldn't eat them straight from the fruit. To make the most of them, the seeds need to be sprouted and shelled.) Once sprouted, shelled and dried, watermelon seeds become edible, protein-packed treasures. Just a one-ounce serving (about 1/8 of a cup) boasts 10 grams of protein -- comparable to the amount found in your Greek yogurt breakfast.

"Sprouted" seeds are germinated and oftentimes are higher in nutrients than their non-sprouted versions. Sprouting removes compounds in the food that make it difficult to absorb all of its nutrients, increases nutrient density and makes the food easier to digest. In the case of watermelon, the seeds are stripped of their black shells and resemble seeds. 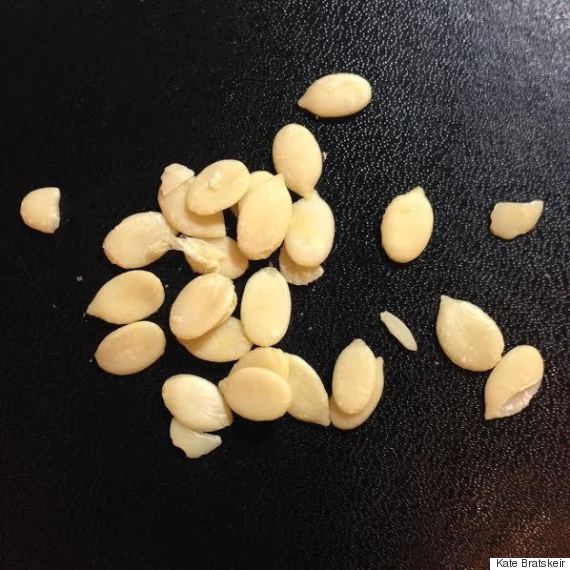 But any old seed this is not. Truly, these seeds are a robust snack: They're packed with protein, vitamin B, magnesium, and monounsaturated fats and polyunsaturated fats, which have been shown to reduce cholesterol levels, inflammation and risk for heart disease and stroke.

If you've ever daringly chewed on a seed while munching on the fruit, you know they taste nothing like watermelon. Watermelon seeds are most similar to sunflower seeds in flavor, but a little less nutty and thick. They'd taste great topped on salads, blended into trail mix or eaten out of the palm of your very own hand.

Most nuts and seeds do the body good, but comparatively, watermelon seeds are nutritional superstars.

Based on one ounce servings

If you're not into the whole homespun sprouting process, you can purchase sprouted watermelon seeds in a bag -- like these ones from GoRaw. You can learn how to sprout seeds yourself with a little Googling. For starters, check out this instructional guide from Vertical Veg.

A Trail Mix For Every Trail