Nearly one in 10 watersheds in the United States is "stressed," with demand for water exceeding natural supply -- a trend that appears likely to become the new normal, according to a recent study.

"By midcentury, we expect to see less reliable surface water supplies in several regions of the United States," said Kristen Averyt, associate director for science at the Cooperative Institute for Research in Environmental Sciences at the University of Colorado-Boulder and one of the authors of the study. “This is likely to create growing challenges for agriculture, electrical suppliers and municipalities, as there may be more demand for water and less to go around.”

According to the research of Averyt and her colleagues, 193 of the 2,103 watersheds examined are already stressed -- meaning demand for water is higher than natural supply. The researchers found that most of the water stress is in the Western United States, where there are fewer surface water resources, compared with the East.

Averyt and her colleagues write:

On the water supply side, surface and ground water resources have been declining in much of the U.S. Aquifers underlying the Central Valley in California and the Ogallala, which spans the area between Nebraska and Texas, are being drawn down more rapidly than they are being recharged. Approximately 23% of annual freshwater demands rely on groundwater resources, yet the volume of groundwater remaining is unclear.

Average surface water supplies are decreasing, and are expected to continue declining, particularly in the southwestern US.. Also in the southwest, water availability is defined as much by legal regimes as by physical processes. Water rights define how much and when water may be withdrawn from surface water sources irrespective of how much water may or may not be flowing in a given year. Water quality, including temperature and sediment concentration, can also constrain availability for certain users.

The researchers found agriculture requires the most water and contributes the most to regional water stress overall; the U.S. West is particularly vulnerable to water stress; and in some areas of the country, the water needs of electric power plants represent the biggest demand on water -- so much so that a single power plant "has the potential to stress surface supplies in a local area." In some densely populated regions like Southern California, cities are the greatest stress on the surface water system.

CIRES produced a map illustrating all of the stressed watersheds in the continental United States, with colors from light green to red indicating increasing levels of stress: 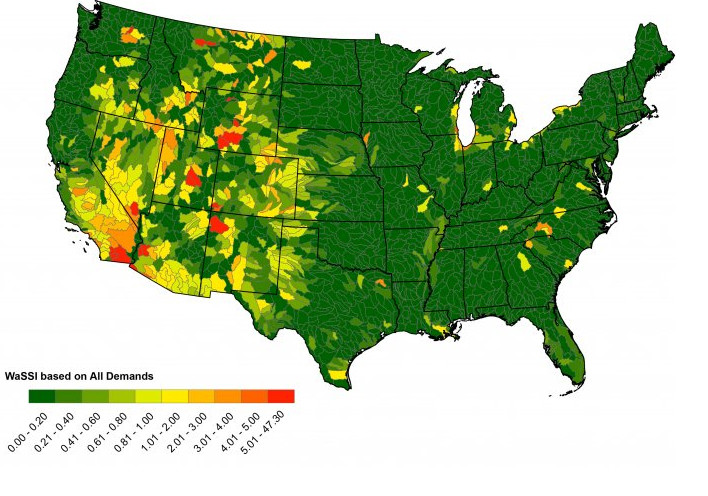 The researchers found that although there are trends that point toward some stability in the water demand nationally as increased efficiency of use offsets increased population, it remains clear that that climate change is likely to increase water demands as well as diminish water supplies across the nation -- especially in already vulnerable areas like the U.S. West, which relies heavily on water from already-stressed watersheds like the Colorado River.

The Colorado River system has long provided the American West with water -- 7 states in all that are home to almost 40 million people. But demands on the river are often cited as unsustainable, due to predicted population increases and climate change. A recent report from the U.S. Bureau of Reclamation predicts a water supply and demand gap in the Colorado River of about 3.2 million-acre feet by 2060 -- roughly five times the amount of water that Los Angeles uses in a year.

Some recent estimates say that up to 20 percent of the Colorado River could dry up by 2050. However, as The Washington Post notes, just how sharply annual water flows will drop and just how large the future population will grow are very difficult to predict.