On a bright, cloudless day in September 1983 I stood on the deck of the Queen Elizabeth 2, waving goodbye to no one in particular. I was 26-years-old and all around people threw streamers and shouted farewell to loved ones on the Manhattan pier below. Since this was a business trip, I assumed nobody would be there to see me off.

I happened to look down and there was my father in his business suit, scanning the ship's passengers. "Cliff!!" I called, using his first name. I'm not sure why I didn't yell, "Dad!" Maybe I knew too many men would respond to that name. Maybe I wanted to appear grown up and sophisticated. Maybe it was the first thing that came to mind. Whatever the case, my Dad heard and found me, waving from the ship's rail.

A huge blast sounded from the horn and we started pulling away. By degrees and inches, the distance between me and my father grew.

Sea gulls called to each other. The air smelled briny and oily and sweet. Tug boats and sail boats and speed boats swirled around New York harbor. I watched my father grow smaller on the dock. I was touched he took time out of his work day in Long Island to see me off. As far as I know, he stayed till the ship disappeared from view.

We sailed past the gleaming towers of Manhattan, under the Verrazano-Narrows Bridge and finally into the open waters of the Atlantic Ocean. In my cabin that afternoon I found a bouquet of flowers from my parents wishing me "Bon Voyage." Five days later, I arrived in Southampton, England safe and sound.

Thirty-one years have passed since that September afternoon. The Queen Elizabeth 2 was retired in 2008. I have two sons now, almost the same age I was back then.

These days my father spends most of his time confined to a hospital bed in his home, weak and frail, unable to move. All his food must be pureed into unappetizing lumps to prevent choking. He must be hand-fed every morsel by my Mom or an aide. My father's dependent on others for everything, including the most intimate details of his life.

Sometimes I think of that day when he and I waved goodbye to each other. Only this time that Bon Voyage is reversed. I'm on the dock and my father's on the ship. But instead of the QE2, the vessel slowly pulling my Dad away is Parkinson's Disease, taking him inch by inch, bit by bit, from the family and life he loves.

I picture him standing on the deck, giving a sad shrug. "Do you believe this?" he asks. I shrug back, trying not to cry. "No, Dad, I don't." Like that day the QE2 finally disappeared from my father's sight, my father will someday disappear from mine.

I tell myself this is part of getting older. And up till three years ago, my father led a good, happy, healthy life. So many people have gone through these hard times. And now it's our turn.

And yet it doesn't make it easier. Every time I see my father I tell him how much I love him.

And many times I've thanked him for showing up on that beautiful September afternoon ... simply to wave goodbye.

(Postscript: My father passed away from Parkinson's Disease in July, 2015.)

Laurie Stone writes from the woods of Easton, CT. Come visit her blog, "Musings, Rants & Scribbles" where she shares thoughts on growing up, growing older and growing (hopefully) wiser. You can also find her on Facebook and Twitter. 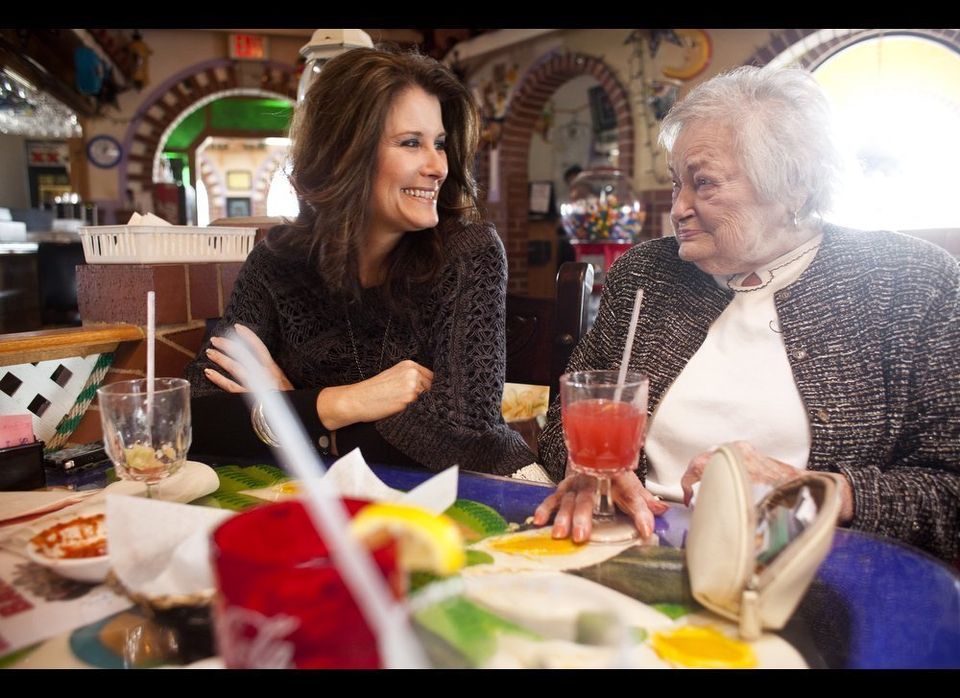 1 / 6
Kelley Hawkins (left) smiles with her grandmother AnnaBelle Bowers, 87, while at lunch in Harrisburg, Pa. Hawkins shares full-time care of Bowers with her sister-in-law LaDonna Martin. Both are nurses with two children each, and move Bowers, who has limited mobility, every two weeks from one home to another.
Kainaz Amaria/NPR