Firefighters battling the blaze at the 100,000-square-foot Magnablend chemical plant in Waxahachie, Texas have decided to let the inferno burn itself out, NBC DFW reported on Tuesday morning.

According to NBC DFW, firefighters tried to extinguish the flames, which started on Monday morning, by using unmanned water cannons. When those failed to put out the fire, they tried pumping extra water through the building's sprinkler system. The fire, however, caused tanks holding flammable liquid to rupture, spreading the flames further and even burning a fire truck.

The Washington Post reports that the fire at the plant -- which stores 80,000 gallons of liquid -- also moved to a field and train.

PHOTOS AND VIDEO BELOW

The Associated Press reports that there have been no injuries, but a school, junior college and apartment complex had to be evacuated on Monday. About 1,000 people who had been told to evacuate returned to their homes later in the day.

In a statement, the U.S. Environmental Protection Agency said it has monitored air quality both on the ground and through a specially equipped airplane that made several passes through the smoke plume caused by the blaze and officials have not found elevated levels of toxic chemicals. The EPA said it "will continue to conduct ground level air monitoring."

Magnablend spokesman Donald Golden told WFAA-TV that 25 to 30 employees who were inside the plant's 100,000-square-foot warehouse evacuated safely when the fire broke out before 11 a.m. Golden said the company manufactures about 200 products, including some that are hazardous when ignited.

The fire was 95% contained as of Monday night, according to the Associated Press.

For more on the fire, click over to the coverage from NBC Dallas Fort Worth and the Associated Press.

LOOK: Pictures from the Magnablend chemical plant in Waxahachie, Texas. 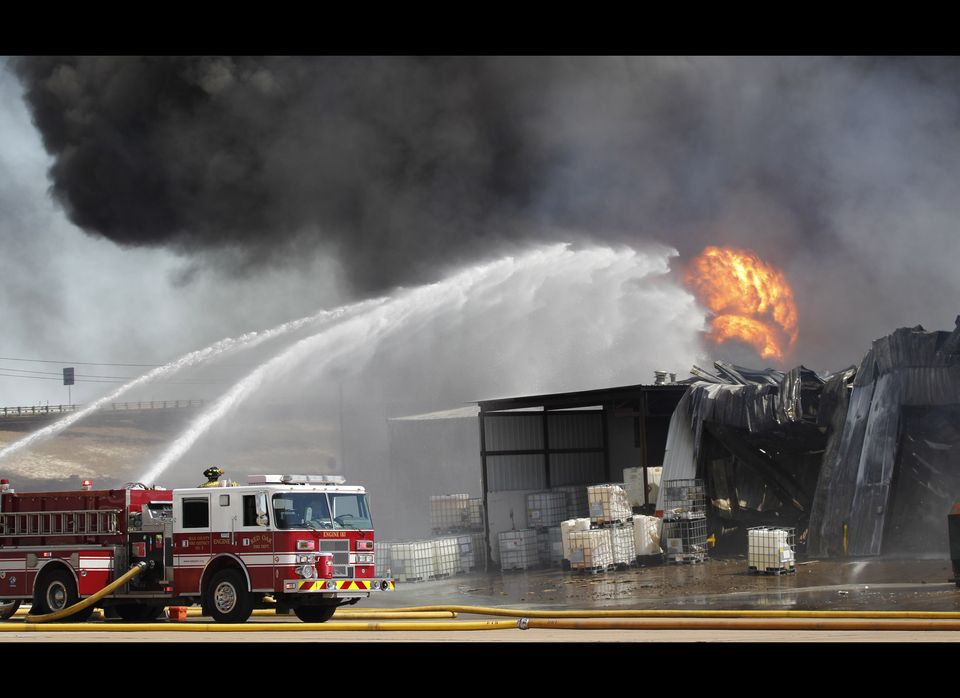 1 / 11
A chemical plant burns near Waxahachie, Texas, Monday, Oct. 3, 2011. The cause of the fire is unknown and no injuries are reported. (AP Photo/LM Otero)
AP