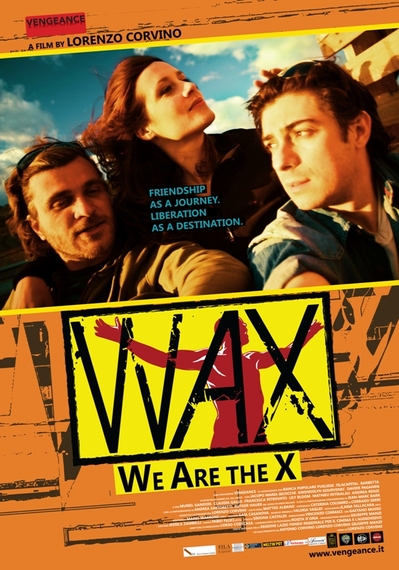 WAX: We Are the X is an Italian film, currently making the festival rounds that can be effectively called the first "selfie" movie. Featuring a nouveau cast performing along side such stalwarts as Rutger Hauer and Jean-Marc Barr, the film features a bevy of young French and Italian up-and-comers. Wax deals with current socio-political realities of Europe like the cultural confrontation between people from different countries affected by the financial crisis of the past few years, and aims to reveal the generational struggle of searching one's own dignity through work, while also encouraging a debate on the relationship between the idea of sacrifice and that of liberation. I spoke to first time director Lorenzo Corvino about his innovative and intellectually challenging film. 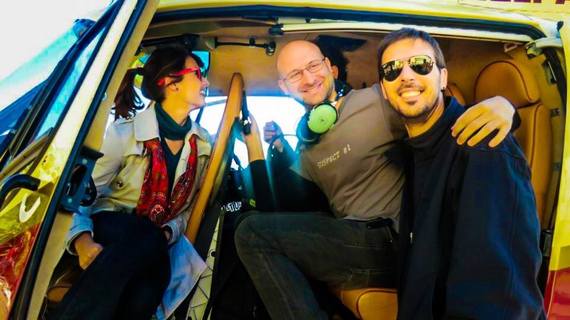 Lorenzo Corvino on set (with the green headphones) directing, with Gwendolyn Gourvenec.

How did this project come to fruition?

The film was born out of the desire to tell the story of my generation, the Generation X of Europe; the post baby boomers. I did not want to make an Italian film. I wanted it to cross boundaries, and therefore my actors were not only Italians but also French, German and other European nationalities. We raised the financing privately to maintain our creative independence and so we were not subject to provincial politics or limited storytelling that sometimes is required to get traditional funding for an Italian film.

In the film I tried to create a sense of wonder and thrills to the audience of 30-somethings, who have and are still struggling to define themselves as a generation.

It's been described as the first "selfie movie." What does that mean?

I wanted the audience to to look at themselves in the mirror. That is why I call it a "selfie" movie, using the "found footage" storytelling format usually used in the horror genre. I also wanted the use of multiple image capture means, from iPhones, to movie cameras, to street cameras to traditional film. The set up is following the lives of three people a week before their disappearance, or death, as they film themselves within the context of a road trip. As things happen to them, every moment becomes a piece of a puzzle that brings the narrative full circle. Whatever happens to them, internally or externally, in the film, somehow a camera, an electronic machine, is capturing that moment. Just like when we take a selfie we are trying to show the world we exist and to have those seeing the selfie identify with us and participate in our experience in "real" time.

What does the film reveal about this generation?

Every generation has fights with the previous generation to define themselves; to have their existence valued outside of the appreciation towards their parents for having brought them to the world. The huge economic crisis we've endured in the Western World and the ongoing wars are really between the various generations. On one side we have the parents who are helping their children who are unemployed to survive, on the other, we have the children who are unemployed because of the mistakes of their parents, living in a world with little hope. This new "lost generation" which could be the one that turns things around, is frustrated because we grew up with the illusion that we would inherit a world in better shape, and then the economy crashed. And now for many of us it is too late as the new, younger more technically savvy generation is taking over.

And that is why I call them the "Expendables." Their education sometimes means nothing, their identity means nothing. So they try to express it through social media, through the selfie culture, to get approval from the world, to prove they exist. That's what happens to our protagonists until they choose to become new people with new identities and to leave only behind only found footage of their old selves.

In the end though, I want to entertain and hope this movie portrays with sincerity the core of the story: three people in their 30s who learn to love themselves and one another.

Translated from the Italian by Alexia Melocchi of Little Studio Films who is handling the worldwide distribution and festival tours of Wax.