The Flaming Lips can fit into half a dozen categories. Depending on who's listening, Wayne Coyne and his band of psychedelic magic makers are a one-hit-wonder group, a DIY punk act, the best goddamn band at Bonnaroo, a gift sent from the '70s or a freaky cover band out to destroy (or reinvent!) your favorite songs.

On the Flaming Lips' newest album, "With A Little Help From My Fwends," due out Oct. 28, the band teams up with everyone from Miley Cyrus to J. Mascis to My Morning Jacket to cover Beatles songs. Some tracks, like "Good Morning, Good Morning," featuring Zorch, Grace Potter and Treasure Mammal, are only slightly reminiscent of the original, but that doesn't seem to matter. The album is a giant house party, with a guest list Coyne hand-picked and smashed together.

HuffPost Entertainment caught up with Coyne, as he sat in his car outside an art gallery in his hometown of Oklahoma City. He knows everyone wants to hear about the late-night sessions with Miley Cyrus and their matching tattoos, but touching on everything from his years-old feud with Erykah Badu to his relationship with the Ono Lennons, Coyne tried to figure out why exactly they made this album. 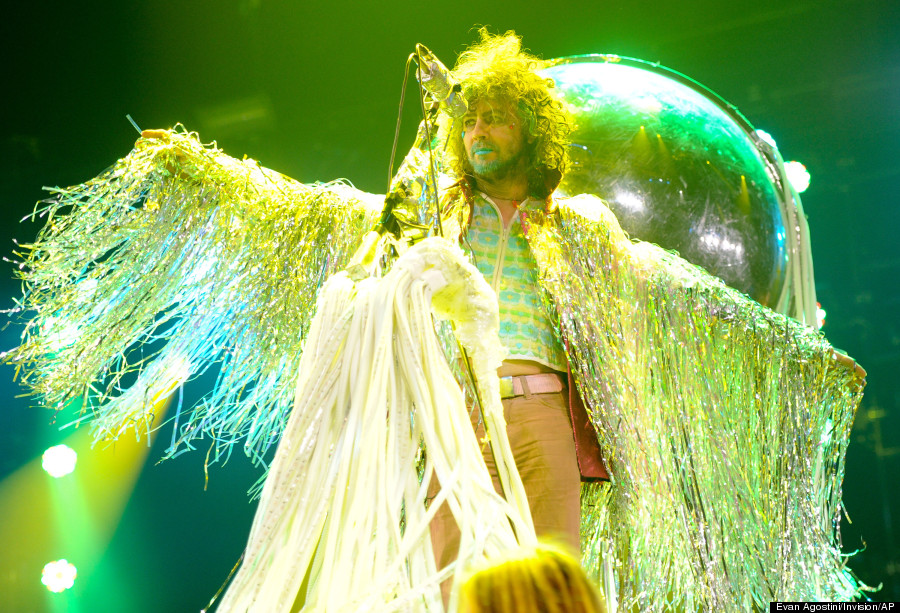 To start from the beginning, why was this something you wanted to do?
It happened a little bit by accident and a little bit by circumstance. We were doing a New Year’s Eve show last year, and the big, unique moment of the show was we were going to do five or six of these John Lennon Beatles songs. One of them was "Lucy In The Sky With Diamonds." Of all the songs, that was one that stood out; we made it our own. We had this recording and then, I think, we did the song on the David Letterman show. It was becoming something that we liked and that people were aware of. Then, when we got to have a day in the studio with Miley Cyrus, who we’d become friends with, it was one of the tracks that we tackled. We talked for a moment about just putting out "Lucy In The Sky With Diamonds," but it was then like, "Why just put out this one? Why don’t we put out the whole record?" In the weeks or so that followed, we got My Morning Jacket [to come in too]. Then, before we knew it, we had two or three really great tracks. That set us off. That was about the end of May.

When you got in the studio with Miley, were you there working on other projects?
It was mostly this other stuff. We had a couple of tracks that were Flaming Lips-designed tracks for her to sing on. We thought if we had time, we’d do "Lucy In The Sky." Then it all just worked out. I think it’s only one or two takes that you hear on there. It’s almost like anything she sings is great. She had a great way of doing it and was very Miley. That wasn’t the agenda but it became that.

Is the other stuff you recorded with Miley intended as a "Miley Cyrus release" or is that a collaboration project?
She’s going to be done with her tour soon, and we just sort of set aside time. We’ll get together and make music and hopefully we’ll make a bunch and pick and choose what could be Miley Cyrus’ next record. I don’t know if she’ll just work with us, but we’ve been working like that. She’s musical and creative and has got a billion ideas. She’s open to everything. It’s not stressful and it’s not scary. There’s no ego. That makes it very easy to say, "Fuck yeah, let’s make some music!" I love her to death. I really do. I absolutely love her.

Well, to the outsider, your friendship is recorded all over social media. She posts so many photos of you guys in the woods hanging out with friends, smoking and just hanging out.
She’ll do anything. Like, "I’m Miley Cyrus in bed smoking a joint." I’m always posting things that are saying "Here’s what the Flaming Lips are doing." Or, "Look who I get to talk to." Or, "I found this frog." My take on this is I have such a wonderful life and it really is all because of the Flaming Lips fans. I think she’s just a freak that will do anything. I think between us and the third element of the paparazzi just being interested in Miley Cyrus’ world, there’s a lot that goes on out there. If I say I’m making a record people will say, "Oh cool." Then people say, "Are you doing it with Miley Cyrus?" If I say yes, then 10,000 more people want to talk to me.

I love at the end of "Lucy In The Sky," you can hear her very faintly say, “Does that make you nervous?” I assume that was intentional, but was there a backstory behind that?
That is pretty subtle and it was something I didn’t realize was there until we were working with Dave Fridmann in his studio. He was like, “She talks at the end!” I think I left it in because I want people to know this isn’t produced or calculated. It’s very much what the Flaming Lips do a lot. Steven [Drozd]’s little Casio beeping watch that he had for five years came up in three of our recordings. We were going to leave it in and people will still talk about it like, "I love how you left his watch in there." No! It’s part of the world of what we do. I forgot what she said, but I think it’s fucking cool. 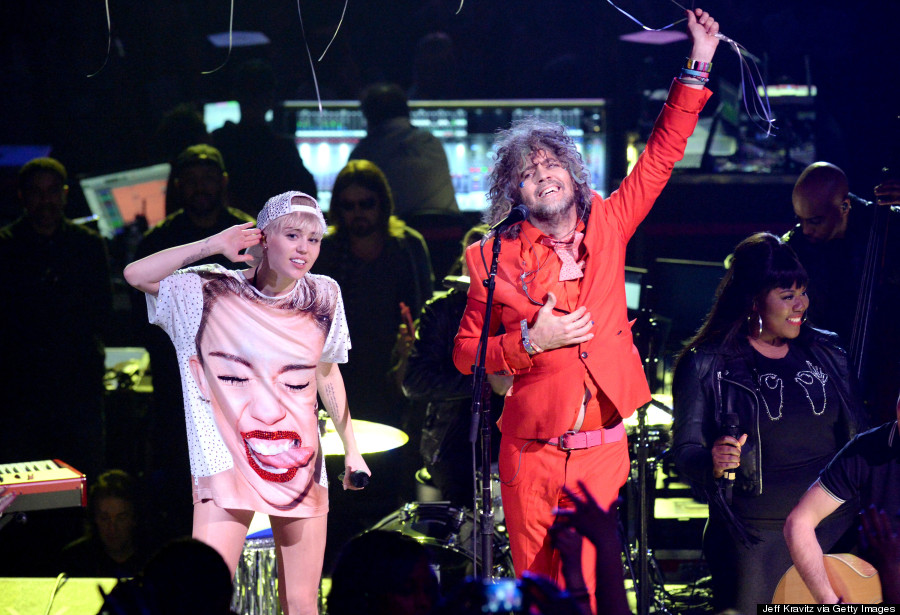 It feels normal in there.
She’s such a hick. I love the way she talks. She’s like, “Man, I’m fucking stoned as fuck!”

The last time I saw you live was last year in New York when Sean Lennon’s band was one of the openers and Yoko Ono came out on to perform with you. Do you remember that gig?
For sure, yeah. It was a magical night. We were playing with Tame Impala.

Have you heard from Yoko about this album?
Well, we know Yoko, and Sean would have been on the record, but he was just doing so much stuff in between and he never got around to it. We didn’t exclude him. So, in that way, if there’s anybody alive that is able to give us a hint of, “Hey, this is cool,” I think it would have to be Sean. Sean loves that we do these things. I don’t think Paul McCartney will ever listen to it and I don’t think Ringo Starr will care. But I feel like if Sean said, “I think this is too weird. I don’t like this,” it would have maybe changed what we thought about it. And for Yoko, well, I don’t really think Yoko's going to sit around and listen to her own music, let alone the Flaming Lips’ music.

I also wanted to talk about the guest vocalists on this record. When you look at the tracklist, it’s impressive. How did you assemble this group of people?
I call it encouraging them to do this for me. I think a lot of people want to know that this is important to someone to do this. A group like Phantogram, who are meticulous, and they take a long time making their record. They’re insecure and they’re private and I know that about them. I was working on them from the beginning. We’re great friends and all that, but that’s an area within people, that thing that makes them create is a powerful little spot. You gotta help them get into some space. To me, if the music is great, the other shit is worth it. I did that collaboration, it came out in 2012, with Erykah Badu. She’s fucking crazy, in a lot of great ways and a few bad ways.

Have you spoken to her since that collaboration?
Yeah. We love each other and all that, but I don’t want to get too involved with her because she’s crazy. She knows I know that about her.

You’ve said that before.
She would be the first one to say, "I’m tough," and I’d be like, "Yes, you are." I think the music we did together is of the caliber that I’m like, "Fuck! I’d pay to hear that." It’s worth it to me to do all the things with someone that’s unpredictable like her. Not everybody’s like that. I like that, though. I don’t really want people to be normal and boring. I like that they’re crazy. I’m crazy too. 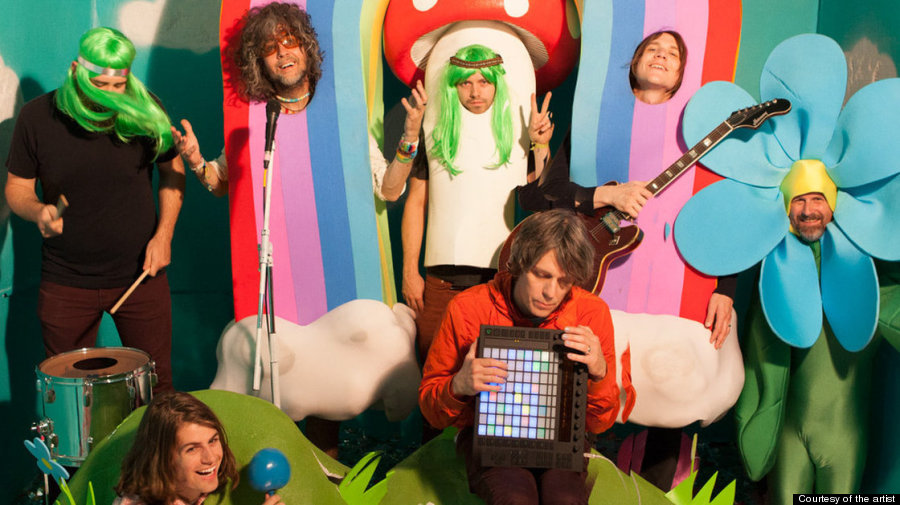 Was there a crazy single memory from making this album that stands out?
The day that we were with Miley was a lot of fun. We all partied pretty well into the night before and we got into the studio. She didn’t have any managers or handlers or anything. Getting stoned, people drinking, having fun. At the end of the night, she got a couple of tattoos. We all got a lip tattoo, but then as this went along her dog, Floyd, which was a big part of her life and a big part of her tour, was killed in the middle of the summer. We bonded over a million things, but one of the things we bonded over was that we love our animals. When we’re around each other we always have dogs, we just have that about us. When that dog died it just really was crushing. What made it crushing for her is that she had a song in her big show where this giant inflatable 50-foot version of her dog. She sings to her dog on stage and the day her dog died, she went on stage three hours later and had to sing to this giant thing. There’s video of her just crying all the way through it. When I see that, I cry. I can’t watch it without feeling.

These things are just life happening to you. Part of what we decided was that we would make this record and once we got everyone involved, it was a dilemma. Who’s going to make the money? We set up a charity here in Oklahoma City where we live, which is an all-volunteer animal rescue thing and it was based on this idea of her love of her dog and our love of animals. That was a thing that bonded us. I drew this little picture of what I thought looked like Floyd, but also looked like my girlfriend’s dog. So we have this magic picture of both of our dogs and she said we should get a tattoo of that. Then we ran into her out in LA and we went over to her brother’s house and we got these tattoos. All those things together give you this kind of momentum and reasons and love to keep going. I can’t actually see my tattoo when I look in the mirror, but there are only three people in the world that have it: my girlfriend, Miley and me. All these things are done with a lot of love.

Watch "The Flaming Lips - With A Little Help From My Fwends Part 2," debuting on HuffPost Entertainment.