On Aug. 30, Miley Cyrus finished her hosting duties of the 2015 MTV Video Music Awards by playing a set with Flaming Lips frontman Wayne Coyne and then announcing that her new album -- a collaboration between the two artists -- was immediately available for free online.

After the middling turn at hosting the annual awards show --arguably a night  most remembered for the moment Nicki Minaj seemed to go off-script during an acceptance speech, going after Cyrus with the meme-able line, "Miley, what's good?" -- early reviews for the record weren't sure what to make of it all.

Publications knew they had to quickly say something about the collaboration due to Miley's high-profile stardom, but how does one quickly formulate critical thoughts about something so out of left field? It was one of the biggest pop stars of the decade going around her label to put out a free passion project with a 54-year-old king of psychedelia.

By the end of the week, critic scores were all over the place. Entertainment Weekly gave it an A-. NME an 8/10. Many settled for a rating of 3/5 stars (or a C score), but other publications went on the offensive, with Pitchfork notably giving the effort a 3/10 and publishing this long takedown sentence:

But on the whole "Dead Petz" is a borderline unlistenable slog through dorm-room poncho bullshit and blissfully ignorant acid koans ("Can’t you see, all the clouds are dying?"), delivered earnestly from an ex-child star seemingly unaware of how fundamentally inseparable her own privilege is from her "do whatever the fuck you want all of the time" ethos, and enabled by a 54-year-old who should know better.

The Huffington Post recently had a long conversation with Coyne about the reissue of "Clouds Taste Metallic," the iconic Flaming Lips album that turned 20 this year, as well as his recent collaboration with Cyrus. Since the release of "Dead Petz," there has been considerable curiosity about how this came about, why this happened, and of course, to what extent Cyrus -- who is not known for creating her own songs -- truly collaborated on the songwriting.

Perhaps the best place to start in unpacking these mysteries is how Coyne described the genesis for the song's standout track, "Karen Don't Be Sad," as he started, "Well, it's a song that I had, I think, really since about 2005 or 2006," the rough era the Flaming Lips released two of their most famous songs, "The Yeah Yeah Yeah Song" and "The W.A.N.D."

Coyne and the group had decided the song didn't work too well with him singing, and so they'd been looking for a singer for quite some time. They almost did the song with Kesha -- another pop star friend of Coyne's -- but it eventually got used for the Cyrus album. On the very first day of being at the studio with Miley, she and Coyne recorded a bit of the tune and used Miley's very first take -- a stunning feat -- for the song's opening verse. "First take, blammo! When she hits that very first chorus, it's like, it still sends chills up my back," Coyne said.

When this session was done, both Cyrus and Coyne would show it off to friends. "Almost everybody that heard it was just like, 'Oh, my god, do more stuff like that,'" said Coyne. "I don't know if we got other stuff that was of that level, but ['Karen'] definitely has that emotional quality."

Coyne and Cyrus first started getting to know each other after the pop star started saying that the Flaming Lips were her favorite band. The pair collaborated on a Beatles cover -- "Lucy in the Sky with Diamonds" -- for the Flaming Lips Beatles tribute, "With a Little Help from My Fwends," out in 2014.

The two are becoming closer collaborators, but in terms of making this specific album, Coyne admitted, "So much was done real fast. She's got a lot going on and we got a lot going on. And there's these moments where you'll do the beginning of the song and then two months later you have another piece of the song, and now you're connecting pieces of songs together."

Coyne added with a laugh, "But, I mean, every day with Miley is insane and memorable ... I mean, there's never a day when you just go, 'Oh, we're just going to go record.' There are always 100 things that happen and then we happen to record on that day."

Coyne seems to be in love with both Cyrus' work and party ethic -- "always going 1000 miles an hour" -- and the alluring possibilities of that ethic could be the basis of their perhaps unlikely pairing. "Working with Miley Cyrus, I mean, you get to run into a lot of people, you get to run into people that you'd never ever get to run into," Coyne explained. "Even hang around Kanye West or something ... but I don't know if I would like to be collaborating on the level that we are with Cyrus with anybody else."

According to Coyne, he's never come across another musician with the relentless abilities of Cyrus to produce. "She is relentless. She can work longer and harder than anyone I've ever run into. I think that's why we're a good team, because if she gets weak I'll be like, 'I can do it,'" and vice versa.

But just because lots and lots and lots happens between the two artists, does that mean any of it is worthwhile art? "Between us, there's not much that's going to get in our way. It doesn't mean the music's going to be good, but we'll just keep trying and trying," said Coyne. "I mean, every day is like that. It's just a complete clusterfuck of everything happening at one time and you can never know exactly."

And how was all this energy fueled? "As far as like, drugs and all that sort of stuff goes, that would be every day. It's always insane," said Coyne. After a moment, he concluded the only day that was more low-key was the day after the pair's "Saturday Night Live" performance on Oct. 3, as Cyrus was a bit ill and the after-party went on to 7 a.m. But he still concluded, "That day was crazy too. We just didn't leave the hotel room."

Near the end of the conversation, Coyne spoke about how Cyrus and he reacted to the all-over-the-place reviews of "Dead Petz." Coyne said that after decades of being in music, negative reviews no longer affect his mood. "But I'm old. I'm 54 or 55 or something," explained Coyne.

The Flaming Lips frontman related past experiences to what he understood to be Cyrus' reaction. "I think with Cyrus, she gets hurt by it and then she gets a lot of good things said about her too, and so she gets very happy, and very hurt," he said. "She's 22 years old [at the time of this interview] so she recovers quickly. It could be the worst thing ever and then five minutes later, it's like, 'Oh, best day ever.'"

But Coyne believes in his new friend and thinks people who give her the chance will eventually come around. "Years from now, they'll probably say, 'I didn't really like her when that record first came out, but now i love her,' and I'll say, 'I know.'"

"She's an easy target, and she knows that and we all know that. And it's like, so what?" said Coyne. "In time, anybody that wants to throw quick insults, they'll do it, and she'll keep going." 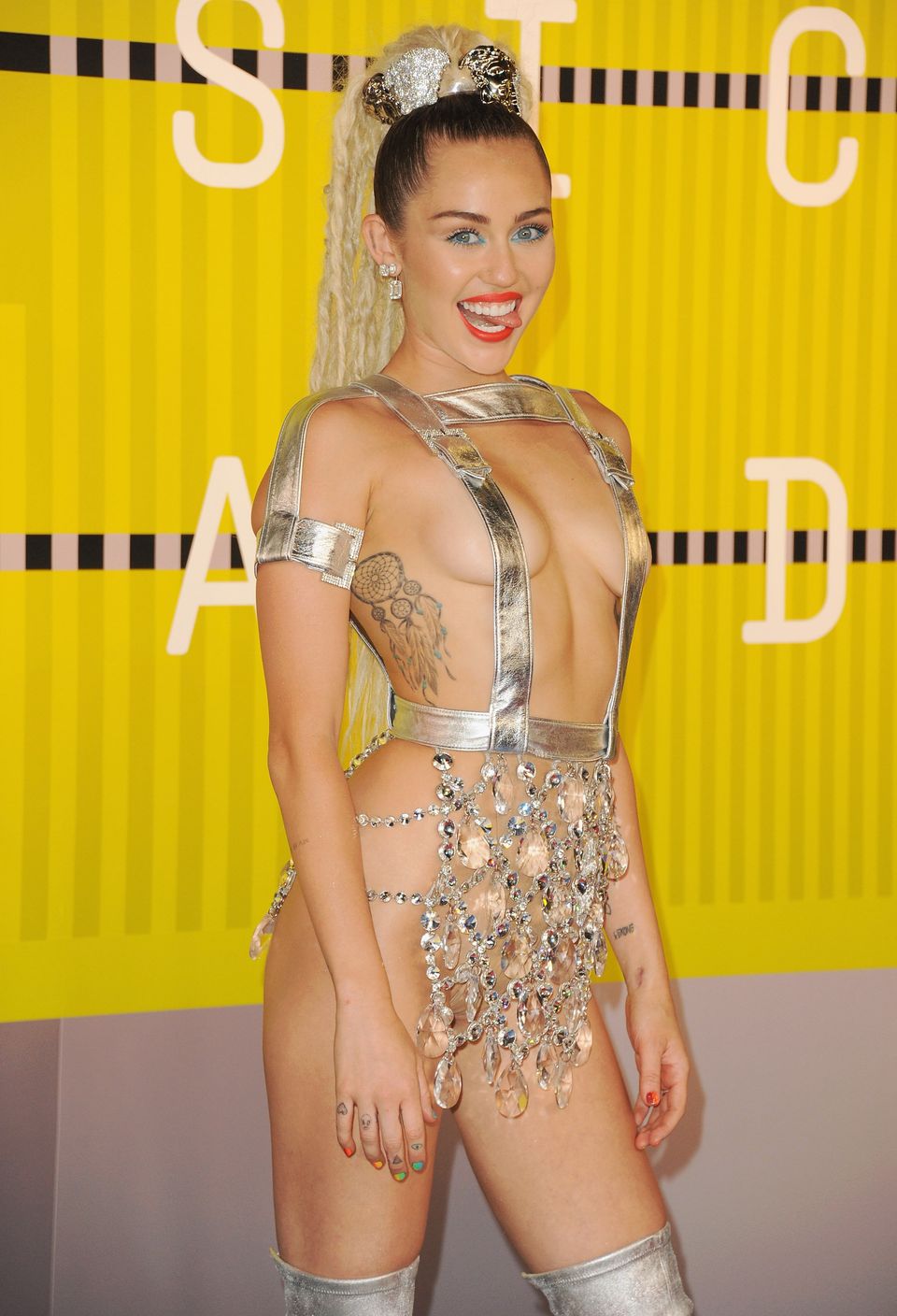 1 / 13
Miley arrived in this suspenders-and-chandelier number by Versace. We thought that would be the most outrageous. We were wrong.
LOS ANGELES, CA - AUGUST 30: Singer Miley Cyrus arrives at the 2015 MTV Video Music Awards at Microsoft Theater on August 30, 2015 in Los Angeles, California. (Photo by Jon Kopaloff/FilmMagic)
Jon Kopaloff via Getty Images