FAIRFAX, VA -- At a press conference early Friday morning, National Rifle Association Executive Vice-President Wayne LaPierre broke down into uncontrollable sobbing when he started talking to reporters about "all the guns that won't get sold after people fail Obama's background checks." 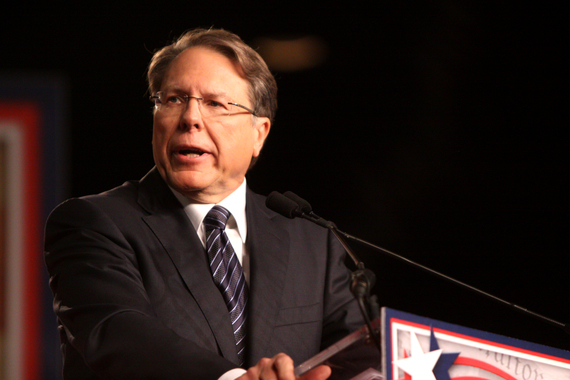 "Some have asked me why I have reacted so negatively to the idea of universal background checks when I myself supported the living hell out of them in 1999," LaPierre said as he caught his breath from all the crying he was doing, "and I even testified before Congress to that effect." LaPierre continued, "But it should be really obvious why I'm crying right now," he said.

Then after another three full minutes of unhinged crying, and wailing, he gasped out, "I'm crying because of all the guns that won't sold after people fail Obama's background checks, and if guns aren't sold, profits aren't realized, and if profits aren't realized, sure, maybe our streets would have a few million fewer guns on them, but are we really safer?"

LaPierre fought another crying fit as he described the days and weeks after the Sandy Hook massacre that left more than 20 people -- mostly first graders -- dead at the hands of a mentally-ill man whose mother had given him access to her weapons cache. "Everyone was thinking about the shooting victims then," he said, "but were they really thinking about the real victims -- our guns?" Mr. LaPierre bit his lip and said, "Those poor, poor gun manufacturers. Who will protect their profit margins, if not red-blooded, ammo-hoarding patriots?"

"You have to understand that the only way we're ever going to be safe," Mr. LaPierre insisted, "is if we get to the point where we live in a world that you can't tell if you should or shouldn't trust the person openly carrying a large rifle or a handgun." Tears of bullets streaked down his cheeks as LaPierre described how devastating having "only 350 million guns in America" would be.

"You can't say you live in freedom until you're not confident you know whether the guy in no uniform -- that would distinguish him as someone you're supposed to trust -- that's carrying a firearm is honorable or not," LaPierre insisted. Though the FBI has confirmed a spike in mass shootings, and perpetrators like the San Benardino shooters exploited the lack of strong federal firearm guidelines, Mr. LaPierre protests the idea that better or updated laws would help these problems because "trying to fix a problem is what liberals do" and "ignoring the problem altogether is how conservatives know life will be best."