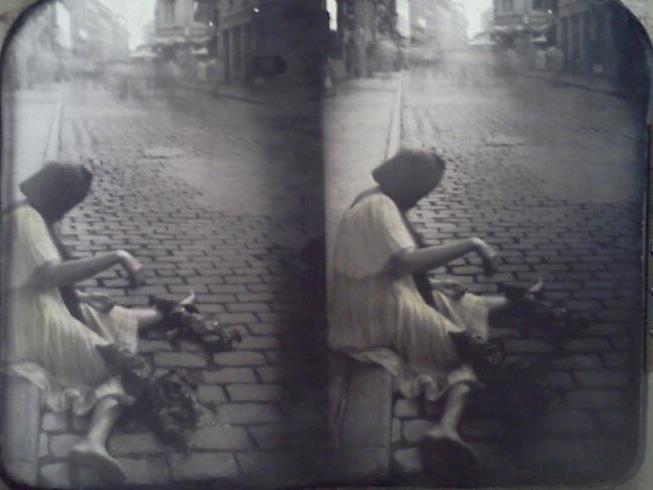 To judge by price at auction and in galleries, and its popularity through museum exhibits, books and photo fairs, fine art photography is now in the lofty realms of well, fine art. Granted these aren't grandma's snapshots of birthdays and vacation landscapes, but rather images from classicists like Diane Arbus, Jacques Henri Lartigue and Weegee who capture moments, people and places with both their eyes and techniques; outsiders like Miroslav Tichy who organically created his voyeuristic single print photographs with cameras made from discarded objects he discovered on the Czech streets like cans, boxes and eyeglasses, decorating with doodles the resulting work which originally created was only for himself; and Andreas Gursky who are redefining the genre through use of stitching, pixilation and other digital manipulation.

Wayne Martin Belger's photographs and intricate, one-of-kind, hand-built cameras -- themselves works of art, often set with gemstones and talismans; crafted with human organs and skulls, blood, bones and blood -- boldly combine both the ancient and post-modern, using a viewing method that can be traced as far back as China in the 5th century B.C., to Aristole, Euclid, and later Ibn al-Haytham (Alhazen) who refined the technique in his the 10th-century Book of Optics, before emerging as in 1850 as photographic device.

The process begins with Belger first desiring to explore and relate to a concept and envisioning the photographs, then crafting a camera as the portal into the subject. He collects artifacts, relics and metals, and painstakingly builds the device with parts he carefully machines, the construction itself a form of meditation on and communion with the concepts and images, much like icon painters who first pray and meditate, then carefully prepare the surface, blend the tempera and delicately layer the colors.

Using 4x5 film and existing light, Belger can spend anywhere from 10 seconds to 90 minutes with the pinhole aperture open to capture a single shot in the camera designed specifically for a series, with the goal "to be the sacred bridge of a communion offering between myself and the subject. All to witness and be a tool of the horrors of creation and the beauty of decay presented by the author of light and time."

To compare and contrast, 35mm movie film runs 24 frames per second, while high-speed digital still cameras can shoot 60 frames per second. With the emulsion film exposed for extended periods, Belger's photographs become movies distilled onto a single frame. Photons from the stationary object of focus, as well as moving objects in the field, are absorbed onto the emulsion, creating softened, at times ghost-like, images. Belger explains:

With pinhole photography, the same air that touches my subject can pass through the pinhole and touch the photo emulsion on the film. There's no barrier between the two. There are no lenses changing and manipulating light. There are no chips converting light to binary code. With pinhole what you get is an unmanipulated true representation of a segment of light and time, a pure reflection of what is at that moment.

Belger's use of body parts is not designed to epater les bourgeoisie but rather to evoke profound personal and universal discoveries in himself, the models and the viewers. His "Heart" camera utilizes an infant's heart in formaldehyde which was discovered among items abandoned by a medical supply house, and is designed to both explore both the relationship between expectant mothers and their about-to-be-born children and Belger's relationship with his twin brother who died at birth. 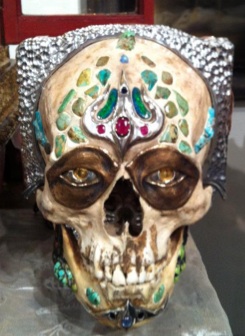 "Yama," Belger's current piece on exhibit at La Luz de Jesus in Los Angeles through November 27, is carefully crafted from the 500-year-old skull of a Tibetan monk and retro-fitted with copper, aluminum and brass camera pieces machined by Belger, who painstakingly placed the camera's dual pinholes in the exact position of the pupils. The camera's internal mechanism is split, producing two exact images that when printed and viewed at a distance become three-dimensional. The skull is set with sterling silver and gems including several large rubies over the pineal gland/third eye, plus sapphires, opals, and turquoise. It rests in a large gilt-edged mirrored box, reminiscent of a memento mori, fittingly as Yama is the Tibetan god of death. The box sits atop a silk prayer cloth on a wooden table; below, a plumb/pendulum of brass filled with artist's blood and mercury swings over a container of pearls and sand, a stunning installation that unites and transcends the concepts of form and function.

This all might sound a bit morbid, but Yama's countenance smiles knowingly, cheerily from his glass box, eager to be readied for his work. Or simply to be admired.

Mounted above, in a frame hand-wrought by Belger, is a conjoined pair photographs taken through Yama: Belger's interpretation of an avatar. Prints in the Yama series include saints Anne and Mary, Kali, Brahma and the Magdalene. 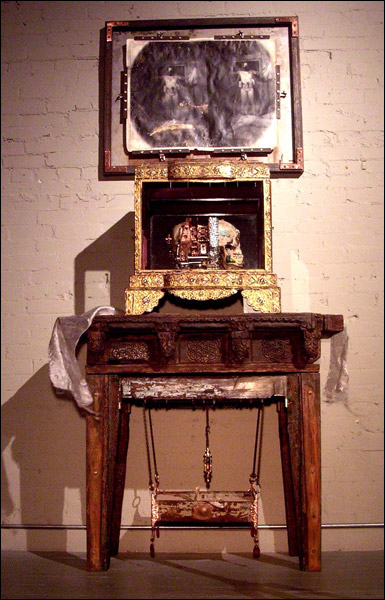 For "Blood Works" his exploration and study of HIV/AIDS, Belger created the "Untouchable (HIV)," camera using aluminum, copper, titanium and acrylic. HIV+ blood from one of Belger's friends-the blood is treated with heparin sulfate to prevent coagulation-pumps through the camera then in front of the pinhole, becoming a #25 red filter.

For shooting with "Untouchable," Belger holds opens calls, and has captured a wide range of HIV+ people across the United States, with plans to photograph HIV+/AIDS subjects throughout Africa this upcoming spring in advance of his participation in a December 2012 group show at the Royal Ontario Museum, which will also include his Third Eye, Yama and Heart cameras and the photos they produce. The show also features works from Joel Peter Witkin, Steven Gregory, Marc Quinn (whose models include Buck Angel and whose sculpture "Alison Lapper Pregnant" was installed in Trafalgar Square), Robert Krasnow, WhiteFeather, Francois Robert, Weiki Somers, Charles LeDray, Rosamond Purcell and Mark Prent.

Belger produces a limited number of prints, usually fewer than 10 of each shot. Collectors of the unique, intricate devices receive one of each print along with the camera that created them, with the agreement that Belger can borrow back the camera to continue the series. In exchange they receive a copy of each new print. Other aficionados collect only the ethereal images.

Belger's beautiful machines and the photographs he produces with them are stunning, surreal, yet incredibly grounded and visceral expressions of the artist's and subjects' place in time and light, and our brief time and place on earth. 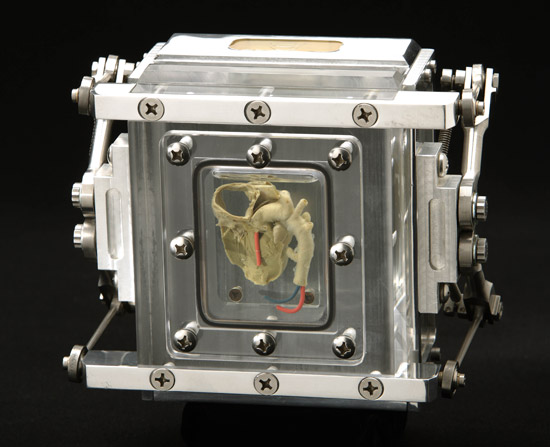 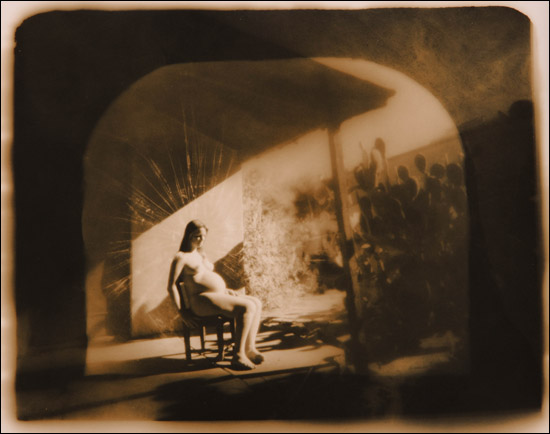 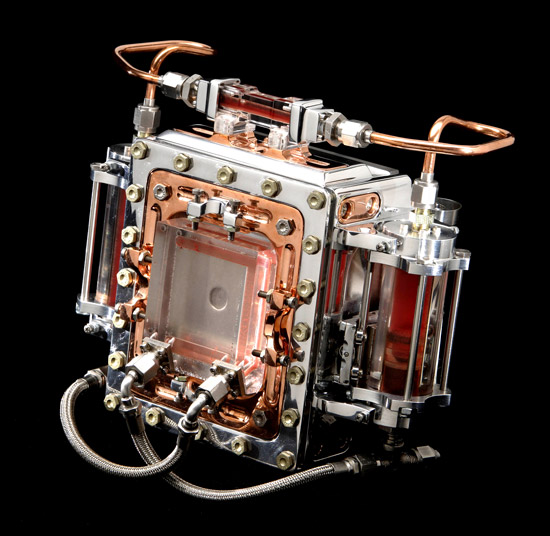 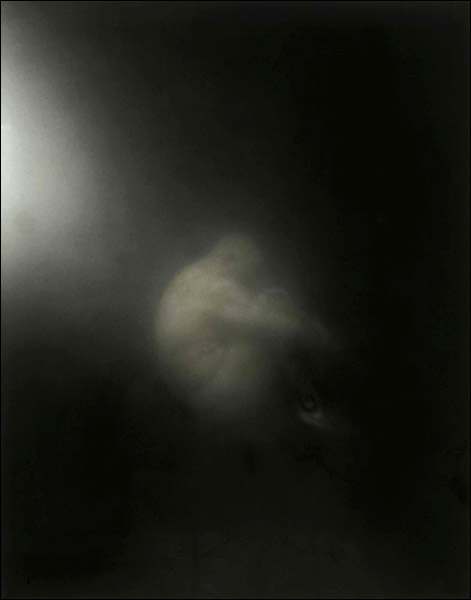