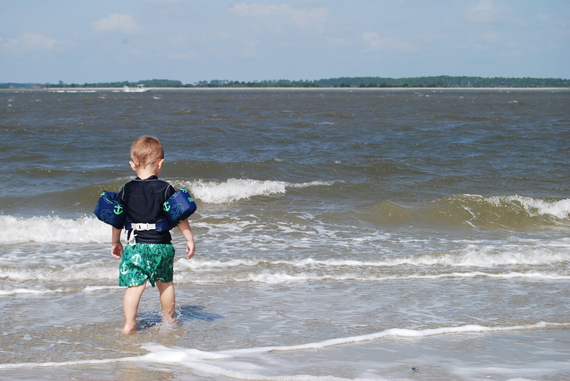 I sat on the beach with the wind whipping my hair into me eyes. The waves were much bigger than they should've been and I should've been keeping a closer eye on the children in the water. I just couldn't bring myself to watch them. Instead I was watching the family next to us. They were laughing and drinking and their daughter was building a sand castle.

I didn't mean to begrudge their happiness but I couldn't help but be jealous. Resentful even. My mind was swirling with the news we had gotten just hours before that my husband's cancer had spread. We had just been informed that he would have to undergo a year of chemo- that he had a 60-70% survival rate for the next 10 years.

I stared at them- so carefree- as they chatted and laughed. I looked at my own children and wondered what it would be like to raise them without a father. Could I do it on my own? Was I strong enough?

I noticed the man watching my son with a strange intensity. He was probably judging me for not engaging more with them I was sure of it. I just couldn't bring myself to play with them, to swim with them, to laugh with them. I was lost inside myself.

I began to get angry that he kept staring. When I had finally had enough I began angrily packing the beach bag. "Ten more minutes" I yelled over the sound of the crashing waves. They began resisting (as all children do) and I got angrier and angrier. My voice took on a hard slicing edge. "Ten more minutes and that's final," I yelled.

It was at this point the man got up from his chair and began coming toward me. I braced myself for what was to come. Surely he was going to berate me for my poor parenting, my disengagement, my tone. I bristled when we came right up to me.

"I'm sorry I've been staring at your son," he began somewhat awkwardly. "You see, he reminds me so much of my boy. They must be about the same age. He's 4 right?"

I nodded hesitantly unsure of where this was going.

"My son drowned 3 weeks ago in a freak accident at the neighborhood pool. Our friends brought us to the beach to try and take our minds off of it. But I can't stop looking at your son."

And right there my heart bottomed out.

"My wife hasn't left the house since it happened," he said. "I was so grateful she agreed to come down here. Our daughter needed this."

We talked for over an hour about his ordeal, my ordeal, the accident, and the diagnosis.

You see everyone has their cross to bear. Their thing. We cannot (although we do) make a judgement about someone based on a snapshot. As I sat resenting their happiness- they sat mourning mine.

I haven't thought about him or his family in almost 10 months as I crawled back inside myself to endure our own struggles. But tonight as I watched my son happily playing in the bathtub- for no apparent reason at all- I remembered him. And now I can't get him off my mind.

It's weird to think "We are so lucky it was just cancer" but that's the reality of it. I still have my children, my husband. Yes we went through hell but we came out on the other side intact. Whereas he.....I don't know how you come back from the death of a child. I know it's possible. I have friends that have done it.

My point is that no matter what you see on the surface strong waters run deep and you never know what was there before you. If we could all take a moment to crawl outside of ourselves and be just a little more human the world would be a much different place.

More:
Parentscancer Deathstruggle
Newsletter Sign Up
Raise the kind of person you'd like to know
Subscribe to our parenting newsletter.
Successfully Subscribed!
Realness delivered to your inbox