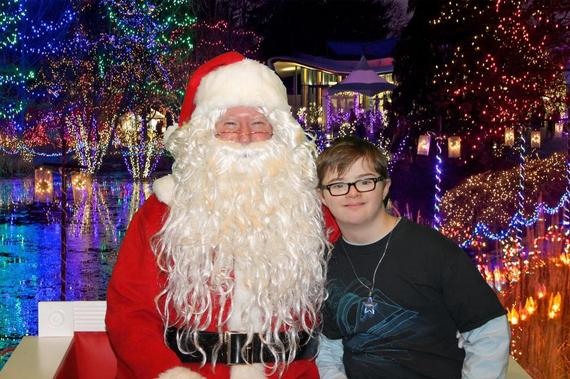 My son Aaron is eyeing Santa at the Festival of Lights at the botanical garden. "Do you want to go talk to him," I ask Aaron, who is 12 and has Down syndrome. He is straddling the little kid/big kid world. "No," Aaron says, his eyes downcast. But then he watches Santa for a long time and eventually garners up his courage to have a chat with the big bearded man.

Afterwards, Santa shows Aaron his magic ring. "Make a wish," Santa says and Aaron immediately replies: "I wish for a wife." A wife! I don't know what to do with that wish. I know that Aaron's wish for a wife is a wish for love and belonging. I wish that for him too.

Ah, but there is no crystal ball with him, or with any other of my children. Would I have imagined ten years ago that one of my kids would be married, another would live with her boyfriend, while my youngest son pines for a wife? No, I had no concept of this future. What will Aaron's life look like in 10 years? The new A&E series called Born This Way promises me a little glimpse into Aaron at age 22.

This new A&E show centers on seven young adults with Down syndrome. We viewed the first episode with Aaron with great curiosity. I kept half an eye on my boy's response as he watched it - he was engaged, but he had no commentary. I wonder, as I often do, what he was thinking. I know that he grapples with his identity of Down syndrome just as the characters do in the TV show.

"I want to go to Down syndrome school," he told me a few weeks ago. "It would be fun!" Then yesterday he said, "I am the mayor of Down syndrome." And before: "Dad, what is the future?" And, more randomly, "Mom, when you dream, do you dream about sushi? I dream about meat." It is impossible to pigeonhole him. His behavior is classic for a 12 year old boy as he tries on different versions of himself to see what fits (our other three boys did the exact same thing as pre-teenagers). One day Aaron is a rapper, the next day a sports dude, another day he is Mr. Technology. He is never fully Down syndrome, but it follows him like a shadow, in the shape of his face and the curve of his eye.

I have often thought it would be an interesting experience to have a camera join us as we go about our ordinary life. I wonder if showing the footage to parents who have a new baby with Down syndrome would be comforting or terrifying to them. Our life just is - it is so normal to us, I have no concept of what it would look like to other people. There are the countdowns to get dressed in the mornings, the negotiation over portion size at dinner, the obsessive choosing of footwear & water bottles, the dates for sushi & movies, the constant string of bad knock knock jokes, the walks to the grocery store in the dark, the arguing over chores, the sound of Stampy playing Minecraft in the background, and the loud solo dance parties that permeate from downstairs.

I know I'm watching Born this Way to remind myself that everything is going to be OK. The scenes of these young adults struggling with friendships and love and independence just seem so damn normal to me. I forget that much of the dialogue is subtitled or that a favourite activity is the stereotypical Down syndrome sport, bowling. Maybe Down syndrome won't be so scary or special to the general public who take the time to watch this show.

Perhaps this TV show will be a reminder that life is just life. For the one thing that I desperately want for Aaron (and for our whole family) is to be treated just as regular folks. For life is beautiful and messy and sad and wonderful, no matter how many chromosomes you are carrying around inside of your body. Life is what it is.