It's the rare article about Lena Dunham that doesn't at least mention her body; many outright focus on it. And at this point, who doesn't have an opinion about her body? If you've watched any episode of her show, you've seen her at least partly naked. And if you haven't, you've probably at least seen her at awards shows or in magazines. In fact, when her Vogue pictures were revealed online, it created a storm of controversy about how much the images were manipulated to transform a sloppy Lena Dunham into a sophisticated one.

The discussion of her body trumps any other discussion about her show "Girls," the show on which she stars, but also writes, directs and created. There has been much virtual ink spilled about whether Lena Dunham deliberately makes herself looks worse on her show and if she "deserves" to sleep with attractive men or if she would even be able to. But most of all, the chatter about her body focuses on her nakedness. The first question at her season three press conference was from a journalist wanting to know if she's going to continue to be naked on her show.

She's naked a lot on her show. And you know why? To remind us that we're all Lena Dunham. Bear with me here.

I got into a Facebook fight recently with a 'friend' who wrote a status about how his version of Hell would be being subjected to Lena Dunham's naked body for eternity. After I called him out on his fat-shaming, he replied that while he was joking, he was 'sorrynotsorry' because he "just found her body gross." He further explained he wasn't fat-shaming because he had dated 'fatter girls' in the past, and the comment was OK because his wife agreed that her body was gross.

Whoa. Let's unpack all of that.

Being overweight is one of the last bastions for even us liberals to judge, shame or tease others. A person who wouldn't think about writing anything anti-Semitic, homophobic or racist often feels totally OK or even justified saying something rude or mean about a fat person. Why? Is it because it seems like while race, sexuality or religion aren't controllable, being fat is? That being fat somehow connotes weakness or failure? It doesn't, of course. If you wouldn't make a joke about someone's race, sexuality or religion, you should know better than to make a joke about someone's weight.

My Facebook friend's laughable excuse was that he wasn't fat-shaming because he had dated 'fatter girls' in the past. Is 'I've dated a fat chick' the new 'I have a Black friend?' Having a Black friend doesn't preclude someone from making racist comments or being a racist. I think it's pretty obvious that even after dating a 'fat' girl (someone even fatter than the 'enormous' Lena Dunham!), you can still fat-shame others.

And it's OK to declare a woman's body "gross" because your wife agrees? A woman isn't more accountable for maintaining higher standards of body acceptance just because she's a woman. In fact, a woman agreeing that another woman's body is gross and shouldn't be on TV is just an example of how internalized and institutionalized our ideas about body image are.

We live in a time when every single person in every advertisement has been Photoshopped. When tabloids regularly run spreads critiquing women's cellulite, beach bodies and postpartum bodies. When supermodels don't even look like supermodels without being shaped, stretched and airbrushed digitally. Of course women feel like it's their right to judge other women's bodies -- the media does it for us all the time, so we might as well do it too.

What woman is perfectly happy with her whole body? Like the popular, perfect teenage girls in Mean Girls show us, anything can be seen as a body flaw. The girls complain about the most banal body issues like their hairlines, pores, nail beds and even morning breath. If this is how girls and women see their bodies -- as a compilation of flaws -- there is something seriously wrong with where we as a culture and we as women have landed.

So why is Lena Dunham naked? To remind the high schooler that there are all kinds of bodies out there -- not just the ones she sees in magazines and ads. To remind the 20-something that there's no shame in having thighs that touch. To remind the mom struggling to lose her baby weight that every body is deserving of respect. To remind the grandmother that just because her body is different than it used to be doesn't mean it's worse. To remind every woman that she is not alone in not having the "perfect" body.

We have ALL been unhappy with our body in one way or another or at one time or another. No one has the "ideal" body. How could they? Everyone has their own concept of ideal. By her unabashed, unapologetic, fearless nakedness, Lena Dunham shows us that her body is our body. Her imperfections are our imperfections. She's not gross and neither are we.

That's why she's naked. And I hope she continues to stay that way. 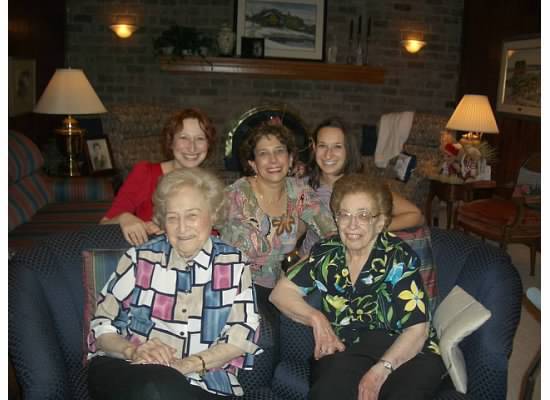 Three generations of women in my family -- sans Photoshop