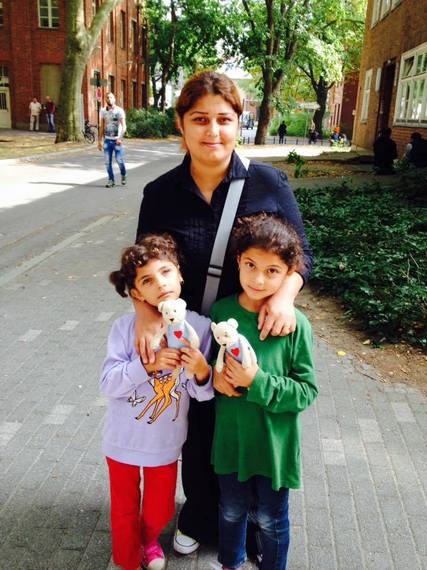 Once I was a refugee, too. During the fall of former Yugoslavia, I visited many refugees camps all over the war-torn region. I edited a book of refugee stories.

Every war is different, so we should never put wars into the same theoretical box, or placed on the same vanity shelf. But anybody can become a refugee. Rich or poor, black or white, male or female, adult or a child. There can never be absolute safety on Earth, and empathy is even rarer here.

Only few weeks ago, in downtown Belgrade, I saw the latest wave of refugees to cross that city. As it happened, I'd just lost my purse to bag thieves, who carried off my legal and residency documents. So I was distracted and rather oblivious of the world's newly colossal refugee situation. Wrapped in my own woes, I didn't at first understand why these rather decent-looking people were sleeping, eating and camping under the blasting August sun, next to the Belgrade bus and railway station. 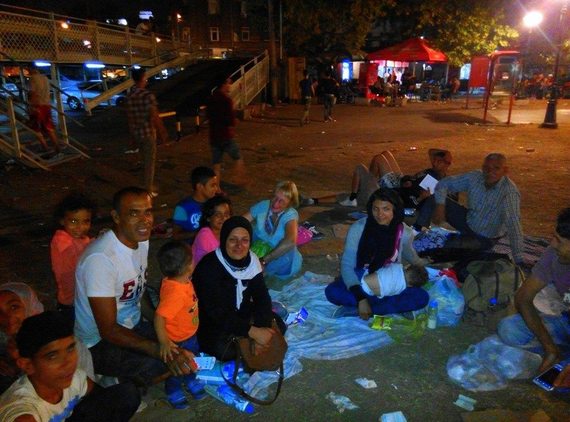 I queued with them at the kiosk. They were extremely polite and I must admit even dignified. They didn't look ragged or out of their minds. They were unhappy but purposeful.

A Moroccan friend of mine later told me: the Syrian people are the best among all of us Arabs. Their culture, their language, it is something that all of us have admired for centuries. It breaks my heart to see them in that way, suffering with dignity, fighting for their lives." She had tears in her eyes.

Only a year ago, I wrote a text for the Guardian why I didn't think the remaining Syria state should be bombed but the USA. I know very well what it means for people to be isolated from the outside world by sanctions, and trapped inside their country by a criminal regime. We had sanctions in Serbia for years on end living under the regime of Slobodan Milosevic. His nationalist propaganda had the support of the so-called decent people, who lost more or more until uprisings finally toppled the regime.

In the case of Syria the uprisings have toppled nobody, the USA did not bomb the regime, and the people are despairing and fleeing as best they can. They flee with history and culture on their backs, with children or without, with money or without, to hit the roads and become burdensome to everyone while they struggle with their burdens. At that point everybody has to take some piece of the responsibility for the state of the world as it is.

You cannot ignore the headlines in the papers, the deaths in refugee boats , the endless queues at the stations to nowhere...A loud cry for help, a solution, temporary and permanent. They have each other, as friends or enemies, but they are isolated from the world order. They are nobody' s people. Their culture and road becomes nomadic. They have no promise of a future of their own. They are called displaced persons, or other euphemisms.

Young people have dreams. Kids laughed and played on that sun-blasted day without water at the Belgrade railways station. Because you can stop everything, kill everything. but not creativity and joy. Even in concentration camps.

I have no political solution to offer, I have no power, I don't even have the standard politically-correct ideas about refugee issues that arise all over the world nowadays. I only know that there are more and more of them. From political refugees, civil war refugees, to refugees from climate change. Those who run away from hunger, repression, bombs, and those who run away from fires, flood and nuclear disasters. I've seen them all all over the world.

They do have something in common: they are proud, they don't beg. They are the vanguard, for the dangers that overwhelmed them are coming to us ,too. They wanted to stay alive, they managed to escape death. What else could they do or say? They could commit suicide like Walter Benjamin on the border with France and Spain, fleeing the Nazis and awaiting a visa that arrived a day after he killed himself. To survive as a refugee takes nerve and patience.

It will not do to point at them them anymore, for it is about all of us. The nomad population is growing, thanks to political and ecological failure. We are wasting our own lives by neglecting planetary politics. In the Mediterranean the nomads drown in illegal boats while the seaside swimmers find the ancient sea to be lukewarm with greenhouse heat -- it's not refreshing any more. The glaciers are melting into torrents down the Alps, wildfires are leaping in rich high-tech California, the refugees are landing on every shore they can physically reach. Such is my news today. As life goes on.