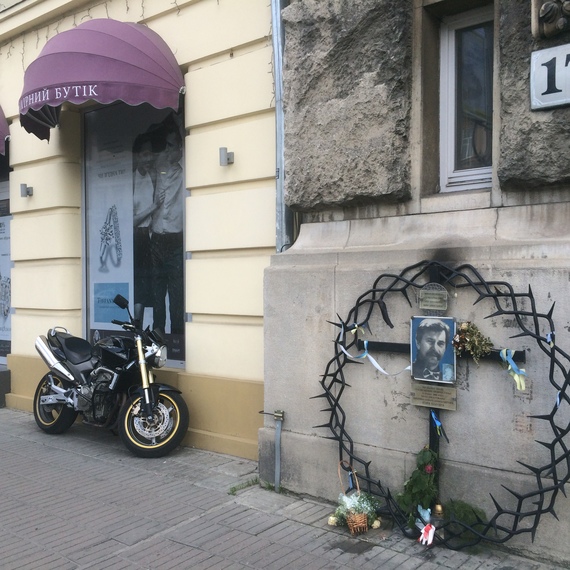 The tale of two realities: an expensive motorcycle parked outside Tiffany's in Lviv beside a memorial to a fallen hero in the War against Russia -- Diane Francis

My first visit to Ukraine was in February 1992 and the City of Kiev was gray, bleak and joyless as was the rest of the Soviet Union. Last month I re-visited -- 23 years and several other assignments later -- to find a new nation of extremes. There is prosperity and there is poverty; there is peace and war; cynicism and hope; there are reformers in high places and looters in low places as Russian operatives still lurk in the corridors of power.

But something else has begun to transform the place.

The 2014 revolution forced the thieves and Russian puppets fully out of the shadows. Former President Victor Yanukovych betrayed the people, stole from them and then began murdering them. Events spiraled downward until he was toppled exposing his Russian-inspired kleptocracy.

He has left two major stains on the history of the country: Murder on the Maidan and his lavish Mezhyhirya estate. This has enraged and called Ukrainians in greater numbers than ever to make sacrifices.

This trip I saw more flags than ever and met some remarkable patriots who have realized that the public itself must rally to the cause of trying to stop, and eventually reverse, the steady takeover by Russia since independence in 1991.

The world now knows that Yanukovych lived like a 19th Century Czar between 2002 and 2014 and oversaw the destruction of Ukraine's military in preparation for the slow invasion of Ukraine. Its manpower was reduced and its equipment sold for profit by corrupt officials.

But most revealing was his estate outside Kiev and the scale of excess. As I toured it, I became more and more outraged with each extravagance: the golf course, yacht basin, party boat, hunting grounds, mansions, landscaping, car museums, equestrian grounds and lined ponds stocked with trout and fountains.

Finally, Ukraine's Pandora's Box has been opened for all the world -- and all the people -- to see. Before 2014, his lifestyle was top secret, guarded by 1,000 soldiers and a 25-foot high green fence along a 34-mile perimeter. The corruption that has ruined Ukraine is no longer a whispered rumor or a mere suspicion. The nation's elites have been exposed like looters on camera.

The most poignant moment for me on this visit was an interview in a Kiev hospital with a young member of the Right Sector, led by Dmytro Yarosh. Make no mistake: these volunteers and others made the difference last year and helped Ukraine's rag tag army hold the Russians at bay. As Dmitry Gorenberg with Harvard's Davis Center for Russian and Eurasian Studies wrote Ukraine's army had only 6,000 combat-ready troops when the Donbas trouble began (down from an army of 800,000 in 1992 when I first came to Ukraine). If volunteers had not helped, he argued, the eastern half of the country would have fallen into Moscow's hands by now.

I interviewed "Maley," his battalion code name, and he told me his story.

"After Crimea was taken, I called the army to sign up but no one returned my calls," he said. He lost patience so he took his grandfather's hunting rifle, and taped a brass plate his mother bought for him to his chest, and went to the front to join the cause.

He became a sniper but was wounded this spring after a regular army medic on patrol with him accidentally stepped on a land mine. She lost both her legs and "Maley" ended up with shrapnel wounds. "She was not paying attention," he said adding "but I'm going back."(I was told that his hospital stay was paid for by donations, not the government of Ukraine, even though the battalion's leader is collaborating closely with the regular army. This is outrageous to me.)

Such sacrifice is unique but not uncommon. There was also a new-found purpose and spring in the step of many. The war is not close to Kiev or Lviv, but everywhere there are reminders in the form of memorials and men in fatigues, some asking for donations for the families and health care costs of the volunteer soldiers.

And thousands more have quietly joined Ukraine's "hidden army of volunteers." A 45-year-old professional woman I met in Kiev raises money for medicine and her husband helps volunteer battalions by procuring supplies. At the time we spoke, he was driving a new, outfitted ambulance back from Belgium to the war front, paid for with donations and fundraising efforts there.

The diaspora is also re-awakening to Ukraine's needs, after two decades of being mistreated by Ukraine's corrupt officials. Canada -- with as many as two million people of full or partial Ukrainian heritage -- has been quick to condemn Putin and to provide military training support and funds.

Canada also endorses (along with many in the U.S. Congress and Defense Department) the provision of lethal weapons to Ukraine by the west to repel and push back the Russians operatives, and now Russian troops, out of the country. But Canada and others cannot do so unilaterally and are waiting for the White House to agree. Pressure is building to directly help Ukraine.

"The struggle in Ukraine is more serious than ISIS," said John Herbst in an interview with me in Kiev. He's a former U.S. Ambassador to Ukraine and Russia and Fellow at the Atlantic Council in Washington. "It's very simple. Any military thinker looks at a threat -- what is the capability of the damage? Putin wants to change the peace established in 1991 and after World War II."

But recent publicity that some Ukrainian militias are comprised of neo Nazis frightens some politicians and donors. And there's concern about the corrupt army leadership and whether it's under control. As for militias, however, Canada's Defense Minister Jason Kenney said in Lviv "We should not allow a small number of bad apples in one battalion to characterize the new Ukraine."

"After the 2014 violence in the Maidan, I had to get involved to save the country from [Ukrainian] dictators and now we have to save it from the biggest dictator in the neighborhood," said David Arakhamiya in an interview. "The Ukrainian army was non-existent and there was a 10-year plan to destroy it from inside."

He and his family were refugees from another Putin war, in Georgia, and settled to begin a new life in Ukraine several years ago. (Georgia was the pilot project for Ukraine.)

He and 350 software engineers and architects decided to work full-time for at least one year to help the military, with some helping as volunteers inside Ukraine's Ministry of Defense.

He and his volunteers have been helping to modernize the army (with some resistance in certain quarters) by digitizing inventory, devising transparency procurement platforms to eliminate corruption, creating weapons and raising funds through a crowd funding site called peoplesproject.com -- where interested donors from around the world can scan a shopping list of projects and causes for donors and use their credit cards to make donations. Millions have been raised so far.

Ukrainian software experts have also joined with aviation experts to make 40 drones a month, using available software and cameras and parts from China. Volunteers have developed encryption devices to protect communications in the field and a radio communications system that allows frontline commanders to direct the movements of soldiers using tablets.

I learned on this trip that Ukraine's military industry has begun to work multiple shifts replacing the equipment that was sold for personal gain. And 50,000 conscripts will be called up this year, the first of several mobilizations that will be trained, in part, by western military advisors.

All of these military reforms and citizen activism must continue if Ukraine is to win the war against Russia and the war against corruption at home. But more western help, in terms of military equipment and debt relief, must arrive soon.

And in the end Ukrainians -- who are easygoing and flexible -- must become even tougher and more demanding that bribery, money laundering and influence peddling end. Reforms are being undertaken but not quickly enough and this fall's mid-term election may reflect dissatisfaction.

If I had my way, for instance, the country's 20,000 prosecutors, like its traffic cops, would summarily dismissed and replaced with new people who are forced to adhere to reforms, the rule of law and transparency.

If reforms are stillborn, the next revolution following those in 2004 and 2014 won't be peaceful and leaders won't have enough time to scurry back to Russia. Patriotic activism is spreading and has become the country's de facto official opposition party.

I'm very heartened and touched by the efforts of Ukrainians thus far, but Ukrainians must learn to heed the advice of America's Thomas Jefferson: "Eternal vigilance is the price of liberty."

I am not Ukrainian myself, but we are all Ukrainians.