This piece was first published in the Newark Star Ledger on September 19, 2001. It is as relevant today as it was then, only eight days after the henious attacks on the World Trade Centers. I was prescient in noting what was to come. Sadly now the fallout of the attacks on American soil have extended to my father's homeland, Iraq, to the French Riviera, and beyond.

"To take blind vengeance on Muslims or Arabs is another kind of evil that we, as Americans, have been fighting for decades," I wrote then. Racism and bigotry with their concomitant acts of violence go unabated. And the voices that protest the abuse of Islam by Muslims continue to be underreported. 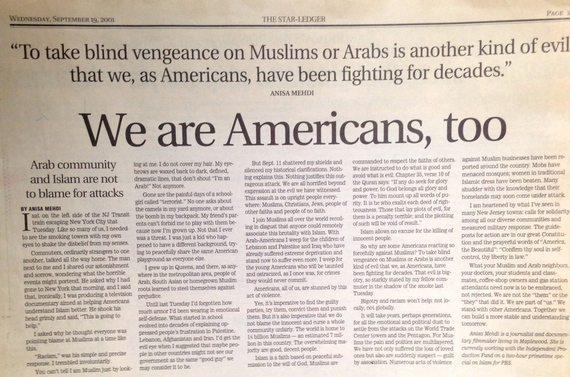 I sat on the left side of the NJ Transit train escaping New York City that Tuesday. Like so many of us, I needed to see the smoking towers with my own eyes to shake the disbelief from my senses.

Commuters, ordinarily strangers to one another, talked all the way home. The man next to me and I shared our astonishment and sorrow, wondering what the horrible events might portend. He asked why I had gone to New York that morning, and I said that, ironically, I was producing a television documentary aimed at helping Americans understand Islam better. He shook his head grimly and said, "This is going to help."

I asked why he thought everyone was pointing blame at Muslims at a time like this.

"Racism," was his simple and precise response. I trembled involuntarily.

You can't tell I am Muslim just by looking at me. I do not cover my hair. My eye-brows are waxed back to dark, defined dramatic lines that don't shout "I'm an Arab!" Not any more.

Gone are the painful days of a schoolgirl called "terrorist." No one asks about the camels in my yard anymore, or about the bomb in my backpack. My friend's parents can't forbid me to play with them because now I'm grown up. Not that I ever was a threat. I was just a kid who happened to have a different background, trying to peacefully share the same American playground as everyone else.

I grew up in Queens, and there, as anywhere in the metropolitan area, people of Arab, South Asian or homegrown Muslim roots learned to steel themselves against prejudice.

Until last Tuesday I'd forgotten how much armor I'd been wearing in emotional self-defense. What started in school evolved into decades of explaining oppressed people's frustration in Palestine, Lebanon, Afghanistan and Iran. I'd get the evil eye when I suggested that maybe people in other counties might not see our government as the same "good guy" we may consider it to be.

But Sept. 11 shattered my shields and silenced my historical clarifications. Nothing explains this. Nothing justifies this outrageous attack. We are all horrified beyond expression at the evil we have witnessed. The assault is on upright people everywhere: Muslims, Christians, Jews, people of other faiths and people of no faith.

I join Muslims all over the world recoiling in disgust that anyone could remotely associate this brutality with Islam. With Arab-Americans I weep for the children of Lebanon and Palestine and Iraq who have already suffered extreme deprivation and stand now to suffer even more. I weep for the young Americans who will be taunted and ostracized, as I once was, for crimes they would never commit.

Americans. all of us, are stunned by this act of violence.

Yes, it's imperative to find the guilty parties, try them, convict them and punish them. But it's also imperative that we do not blame the innocent and curse a whole community unfairly. The world is home to 1.5 billion Muslims -- an estimated 7 million in this country. The overwhelming majority are good, decent people.

Islam is a faith based on peaceful submission to the will of God. Muslims are commanded to respect the faiths of others. We are instructed to do what is good and avoid what is evil. Chapter 35, verse 10 of the Quran says: "If any do seek for glory and power, to God belongs all glory and power. To him mount up all words of purity. It is He who exalts each deed of righteousness. Those that lay plots of evil, for them is a penalty terrible; and the plotting of such will be void of result."

Islam allows no excuse for the killing of innocent people.

So why are some Americans reacting so forcefully against Muslims? To take blind vengeance on Muslims or Arabs is another kind of evil that we, as Americans, have been fighting for decades. That evil is bigotry, so starkly stated by my fellow commuter in the shadow of the smoke last Tuesday.

Bigotry and racism won't help: not locally, not globally.

It will take years, perhaps generations, for all the emotional and political dust to settle from the attacks on the World Trade Center Towers and the Pentagon. For Muslims the pain and politics are multilayered. We have not only suffered the loss of loved ones but also are suddenly suspect -- guilty by association. Numerous acts of violence against Muslim businesses have been reported around the country. Mobs have menaced mosques; women in traditional Islamic dress have been beaten. Many shudder with the knowledge that their homelands may soon come under attack.

I am heartened by what I've seen in many New Jersey towns: calls for solidarity among all our diverse communities and measured military response. The guideposts for action are in our great Constitution and the prayerful words of "America, the Beautiful": "Confirm thy soul in self control, thy liberty in law."

What your Muslim and Arab neighbors, your doctors, your students and classmates, coffee-shop owners and gas station attendants need now is to be embraced, not rejected. We are not the "them" or the "they" that did it. We are part of "us." We stand with other Americans. Together we can build a more stable and understanding tomorrow.

***
That's what I wrote 15 years ago. And today I stood proudly with fellow citizens of Maplewood, NJ celebrating our homegrown bronze medalist Ibtihaj Muhammad, the first American wearing a headscarf to compete in the Olympics. I have completed several documentary films for PBS about Muslims and the Hajj pilgrimage -- also happening right now. We've come a long way and we've a long way to go. I wonder what my grandchildren (if I'm blessed enough to have any) will see and say about this, 15 years from now. 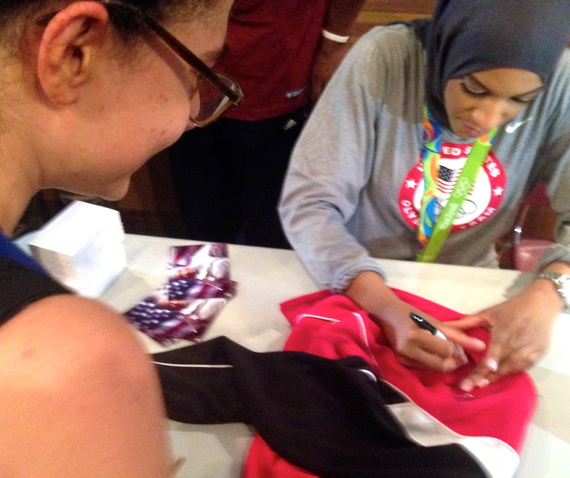