By Amber Leventry/The Next Family 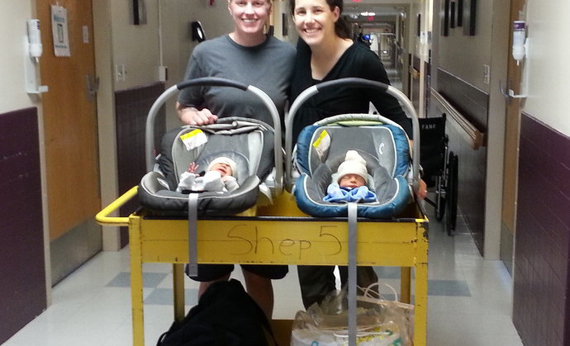 My partner, Amy, and I love our kids, but we are done creating them. No more. Our family is complete. At my yearly physical, the medical student who did my intake noticed a three year trend of increased weight gain, alcohol consumption, and decreased exercise. I asked her to note in my chart that there has also been a trend of decreased money, hours of sleep, and time to function like a human without three kids hanging all over me. We couldn't be more done having kids. Yet even with the genius findings of a naïve med student, it was hard for me to allow the fertility clinic to discard the vials of frozen sperm we had left in storage.

When we moved our remaining supply from the cryobank to our local hospital, we knew we would use all of it, pay to store it indefinitely, or trash it. We offered it to the other family who used the same donor, but they didn't need it. Our individual and collective families are complete. Signing my name was about more than dumping sperm, though. It was saying goodbye to a stage in our lives we cherished and will never have again. 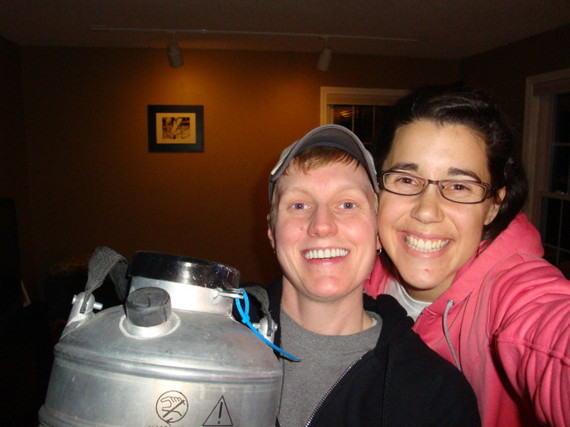 The time before kids was blissfully ignorant. It was when we had no idea what we were getting into, yet wanted a baby more than anything. The time when we still wanted to grow our family felt like a runner's high. It was the time when we had a toddler, yet wanted to give her a sibling even though we still were not sure what we had gotten ourselves into. We were saying goodbye to the original idea of growing our family. The time when dreams were intoxicating, the actual trying part was hopeful, and the pregnancy was mysterious and joyful.

Amy ached to be pregnant, and since I could not give her what she needed to make the child we wanted, I felt infertile when we started the journey to parenthood. As I warmed up to the ideas of shopping for sperm, the doctors who helped us reach our goal, and meeting other families who did the same thing, that feeling changed. My presence, support and love were what completed our family. The sperm was a necessary part of the process, but rather than define the process, our donor and his contribution became part of our family, and I became fertile.

Letting go of sperm meant loosening my grip on who I was and who I have become. But quite honestly, throwing away perfectly good sperm felt like a waste. When I mentioned this to a friend, she pointed out that men waste their sperm multiple times a week without thought.

I can only make assumptions about the number of times a man masturbates each week, but the point is that every day an amazingly gross amount of semen makes its way to the garbage. To lesbian, transgender, or infertile individuals and couples, that trash is amazingly valuable--and really, really expensive when loaded into a cup, frozen, and stored at a cryobank. The sperm by itself is not at all appealing to me, but the results it provided when combined with my partner's eggs are totally worth keeping.

We searched for our donor based on physical features, personality traits, and answers to essay questions provided by the cryobank. Amy and I also wanted to give our children the option to seek and find their biological father if that was ever their desire, so we limited our search to donors who were open. In sperm bank speak, that means the donor is willing to meet any offspring when the child turns 18.

I'll admit that sometimes it's scary to think one or all of our kids will need to look for a piece of themselves outside of our family and home we have created for them, especially for me since I am the non-biological mama. It's not something I worry about often--I'm a little busy with said donor's offspring--but it's the reality of having kids via non-traditional methods.

Shortly after we decided not to pay to store something we no longer needed or wanted, I revisited our donor's profile. I held a photo of him when he was two or three years old and was startled by how much one of our sons looks like him. I read his answers to essay questions and became overwhelmed with appreciation for the things he wrote. I nodded at some of his personality traits and physical characteristics and could see them in each of my three children. I was reminded of why we picked him. The waves of gratitude for what he helped me and my partner achieve swelled in chest, into my throat, and formed into tears.

Sometimes I feel sad to no longer have access to this piece of him and the possibility to dream the dreams of having another child. When I think of all of the hellos I have said because of him, it is easier to make peace with saying goodbye to this part of our donor. The three kids who keep me sleep deprived and on the edge of frustration and worry make it easy too. 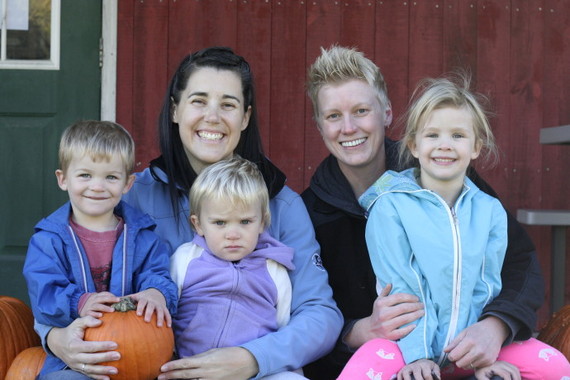 Six years after buying 12 vials of sperm, hoping for at least two kids, having three, and navigating the ups and downs of pregnancy and the first few years of parenthood, I am a richer person. Still, we are done having kids. Releasing our sperm solidifies that. But we are holding on tight to the abundance of family it helped to create.

Amber Leventry is a writer for The Next Family and lives in Vermont with her wife and kids.

21 Skills I Have Perfected Through Parenthood

More:
ParentsParenting lgbt parentssperm donors
Newsletter Sign Up
Raise the kind of person you'd like to know
Subscribe to our parenting newsletter.
Successfully Subscribed!
Realness delivered to your inbox

The Next Family, Contributor

Online magazine for the modern parent