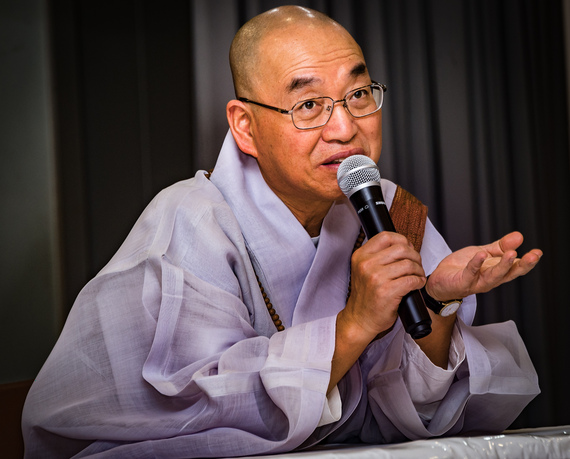 "When Dr. Matt introduced you, he mentioned about your environmental work. I would like to hear about how you think Buddhist teachings are valuable for dealing with environmental issues and global warming."
In general, there are two different views of how we perceive the world. The first view is that all beings exist independently, that the world is a collection of independent beings. From this perspective, life and death of one being is unrelated to the life and death of another.

Buddhism views that everything in the world is interconnected. When Buddha gained enlightenment, it was the realization that interconnectedness is the true nature of all beings. We are not only connected to other people, but to the air through our breathing and to the universe through light. Thus, severing these interconnections means death for all beings.

Therefore, these interconnected relationships should be symbiotic. In the case of the environment, if humans want to develop nature, they need to do so within nature's ability to recover. Conversely, if nature is developed beyond its ability to recover, all beings will eventually be destroyed.

While overdevelopment of nature may seem beneficial to humans from a short term perspective, eventually there will be long term consequences that will harm humans. Thus, the most important Buddhist value is to respect all living things and not carelessly harm or destroy them. I believe that environmental problems can only be resolved when we adopt the Buddhist world view that all beings are interconnected.