If Jesus came back tonight I wouldn't want Him to find me in a gun store; but today, like most days, I am genuinely afraid for my safety, the safety of my family, and those who look like me. And with the increasing number of black men and women being memorialized by hashtags Micah Johnson lashes out, only to be blown up by a robot with a bomb.

I feel sad, angry, isolated, and know how to use and could legally get access to automatic weapons because of the laws in this country. I lament that a man who looks like me would shoot hopelessly at hatred and hit police officers instead because you can't shoot ideas. You can't gundown prejudice, no matter if your scope is military grade. Lord have mercy. Kyrie Eleison.

It is a personal tragedy for me that these are real thoughts in my mind. I have settled on doing research on cameras for our car so that I'm on video in case something happens and I'm too nervous to record it myself. Selah.

This is the world we live in now. A United States of Amnesia in Divided States of America where artillery is hurled at those we don't like today and we disregard the history of how all of us got here. Romans 3:23 says that all have sinned and fallen short, but we don't have the courage to look at ourselves, so we revise the past to fit our desired present. Slaves turn into workers in text books and the Civil War was about northern aggression. (FALSE!)

So what then is there for Americans?

Rage? Some would contend that forceful resistance is justified and an entire "Just War Theory" with great scholarship has been created. I won't post long quotes at risk of losing an audience devoted to instant gratification and/or someone else doing the work for them so you can go look it up. As I reflect again on this growing anger, frustration and hopelessness inside of me, I bring them to God and am brought back to the life and more importantly the death of Jesus.

My honest desires are to be my own protector, my own savior, shield and messiah. And that's my duty right? If I watch the gospel preached by every protagonist in summer blockbusters - that's my job as a hot-blooded american male. And if I take the black male stereotypes of violence and physicality then I am doubly qualified. I need to be ready to respond and protect my wife and child from whatever violence ignorant windbags like Donald Trump and Rudy Giuliani (both people made in the image of God) catalyze against me with their hate-laden speeches masquerading as a legitimate political platform and sound advice. Jesus, help me.

Now what does my reaction say about me? It says I believe at some level that I actually can protect "us" from "them". That somehow the powerlessness that I feel will be alleviated by a barrel, ammunition and my willingness to pull the trigger. And that's simply not true.

A gun won't save me from feeling like a target. Instead it takes the dehumanization I feel every day and twists it into empowerment that isn't real.

So where does that leave me? At the feet of Jesus. 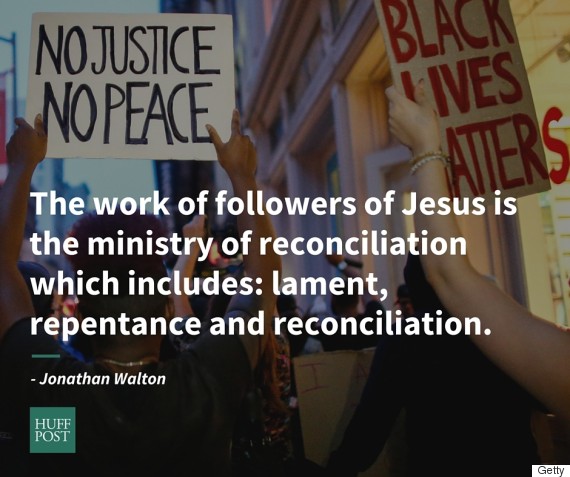 How did love your enemy turn into shoot them if they threaten you? How did bless those who persecute you turn into God bless me and no one else? How can the same Jesus who went to the Cross be used as fuel to execute gross injustice against those in power? I have internalized my fear and now turn my intimidation outward towards those who would dare come against me. How ignorant and misguided I have allowed myself to become.

Somehow instead of leaning into Him I want to get an AR-15. That if I don't take up arms against those who hate me, I've somehow let my wife and daughter down. Love my neighbor turned into shoot them if I have to because gunshots will dispel the potential hatred coming toward us. Somehow a new conceal and carry permit turns people into a beings made in image of God and that police officer, stranger or neighbor needing a cup of sugar just might not be.

I lay in bed with my pregnant wife beside me trying be like Jesus, without thinking I am the Messiah. And that is profoundly difficult because this world desperately needs a savior. Praise God that He already sent one and His name is not me. So I can go to sleep knowing He holds everything together, He is Our Sword and Shield and I am no coward for putting my trust in His love. For it drives out all my fears and His hope will not disappoint us.

Leaders in this country are making terrorists not disciples. We are making militants not furious lovers. We are raising emotionally unstable, unhealthy children with a heavy diet of marginalizIng, one-sided hate-speech. We are writing, speaking, sharing, retweeting, and reposting, racist, homophobic, and prejudiced ideas that prop up leaders who look and sound nothing like the Jesus we claim to love and worship - and calling ourselves Christians.

Instead of grieving that Tamir Rice's sister doesn't have a brother anymore- and Philando Castile's girlfriend's daughter literally saw him killed in front of her - many continue to say in front of cameras, behind closed doors, and around kitchen tables:

"These are isolated incidents."
"What about black on black crime?"
"Saying Black Lives Matter is racist!"

Instead of entering into the pain, grief, distress and hopelessness of my black and brown brothers and sisters, many of us are crushed with rhetoric and discarded with statistics. Instead of pressing into the fear, loss, tragedy and vilification of police officers, law enforcement and the military we take up arms against and curse them. In Dallas and last year in New York City "black men", marginalized by fear and sadness that stoked anger lashed out and one of them was blown up by a bomb carried by a robot. Lord have mercy!

This is where we are. For Trump or against him. For walls or for borderless nations. Choose either the KKK or the Black Panthers. Pick a side! One is certainly the Devil. The dichotomies that we have created and are building our entire lives around is creating terrorists - angry, sad, isolated people of all races who terrorize their chosen "other" online or in real life.

Our nation is breaking down into destructive tribalism - racial, ideological, economic, class-based re-segregation of our world. And the shootings in Charleston, NYC, Baton Rouge, St. Paul and Dallas are only the beginning if Christian Leaders don't disciple a generation of people that will under no circumstances call a black brother or sister a "nigger", a Chinese friend a "chink" or say "fuck the police".

Two years ago I wrote about how Jesus didn't slap Zacchaeus. Jesus did not take up arms against the Roman Empire. He did not invest in building an arsenal and unleash His disciples to mount a revolution to topple the government. He could have and yet He did not.

Does the Upper East Side seek the peace of East Harlem?

Does the South Bronx seek the peace of Park Slope?

The answer might be a personal yes, but likely it is a reverberating collective "No". Our red lines make that very clear.

Followers of Jesus have every reason to be afraid but no reason to stay fearful. We have every reason to feel concerned but no justification for being violent. For in Jesus' own words as He was murdered by the state we have a practical response. "Father, forgive them for they know not what they do."

I am genuinely afraid for my life, the life of my wife and my unborn daughter. But I am reminded in scripture that when the soldiers came to get Jesus in John 18, Peter cut of the ear of Matthias and Jesus put that very ear back on his head. He walked with them, carried His Cross and was killed by a corrupt, oppressive, racist government.

Christians are to make disciples of every tribe, tongue and nation. And we can't do that and hate even one person. Because, ALL are made in the image of God.

This resource, will aid you and your communities in lamenting and repenting well. And I hope that you'll join us in a walk towards reconciliation this is not a moment, it is a ministry that for Christians is uniquely ours.