When I was a girl, my name was Barbara. It was a lovely name that my parents gave me when I was born. "Barbara" conveys intelligence, strength, and just the right amount of femininity, without being too frilly. I liked my given name -- but apparently other people didn't, because they were always shortening it to "Barbie," "Babs," "Bobbie," or just plain "Barb" (which I hated). As a child, I couldn't find my voice to correct people: "Excuse me, my name is Barbara. Please call me Barbara." Instead I would just grit my teeth in silent resentment while others changed my name willy-nilly without my consent.

When I turned 18 and graduated from high school in Illinois and headed west to attend college in Southern California, it seemed the perfect time to reconfigure my name so that people would stop shortening it. I decided to go with my initials, "BJ" -- short for Barbara Jo. "That'll fix 'em," I thought to myself. "They can't shorten that!" My mother had always referred to me as "BJ" on her calendar, with reminder notes to herself: "BJ to the orthodontist" or "BJ to piano lesson" or "BJ's parent/teacher meeting." It felt good to reclaim my name in a way that would stop other people from messing with it.

Today, military brats are having a similar struggle with their own name. I care about the issue because I am one of those brats. I am the daughter of an Air Force pilot who served his country for 30 plus years, fighting in three wars, moving his family dozens of times across three continents. I am my father's daughter. I'm a military brat -- always have been, always will be. 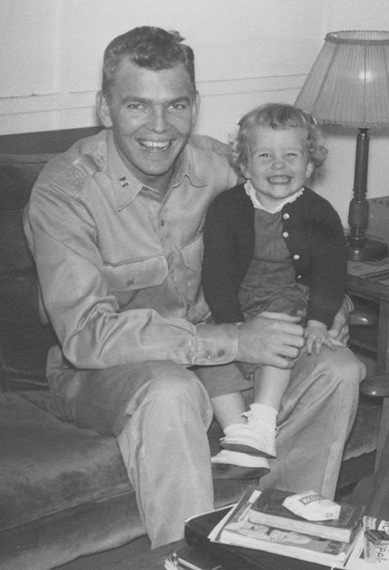 My dad, USAF Captain Kenneth Gallagher, and me in Tachikawa, Japan, 1951

But recently I learned that someone is messing with our name. Two women, Debbie and Jennifer Fink, have taken it upon themselves to change the name that generations of military kids have worn as a badge of honor. The Finks have decided that we should be called CHAMPS instead of BRATS. These civilian women have not served in uniform -- nor were they raised in military families -- yet they have decided that they know what's best for the children of today's armed forces!

What's next? Are you going to try to ban the term "rug rat" in favor of "carpet cutie"? Are you going to replace "ankle biter" with "foot kisser"? Do you plan to insist that The Little Rascals be re-named "The Little Angels" instead? When will the language police stop your misguided attempts to whitewash other people's reality?

Seriously, the whole political correctness thing has gotten way out of control. The Finks' campaign to change "BRATS" to "CHAMPS" is both ridiculous and insulting. The term "military brat" is a timeless, traditional badge of honor. Who are the Finks to change our name without our permission?

Perhaps the Finks just didn't do their homework. Since they have no military background, they don't understand military culture, in which BRAT is a term of affection and respect, connoting a certain element of spunkiness and adventurousness.

In civilian culture, the term "brat" means "spoiled child" so it's understandable that the Finks might be confused about the very different meaning of the term "military brat." But in military culture, kids are anything but spoiled -- we are disciplined, responsible, and we have enormous respect for authority. The Finks' intentions may be good, but their campaign is way off target.

If one were of a cynical mindset, one might suspect that the Fink's re-branding campaign is simply a money-making boondoggle -- a creative way to sell books and get grants from organizations that support military families. But ask any of today's service members and their families, and they will tell you that such funds that would be far better spent on suicide prevention programs for service members, financial counseling for military families, training more service dogs for veterans with PTSD, and other services and support. A campaign to change the name of military brats is money wasted on something none of us asked for and none of us want.

BRAT is not just an American term of endearment -- it is an internationally recognized term that unites military children around the world. While the precise origin of the term "military brat" is unknown, there is some evidence that it dates back hundreds of years into the British Empire, and originally stood for "British Regiment Attached Traveler." Military cultures in Australia, India (also called Fauji Brats), Canada (also called Base Brats), Pakistan, the Philippines, New Zealand, the United Kingdom (also called Pad Brats or Patch Brats). Also known as "camp followers," there have been such military dependent subcultures in many parts of the world for thousands of years." (Wikipedia)

I didn't like people changing my name when I was a girl and I don't like people doing it now. My name is BJ Gallagher and I am a military brat. I am the child of a warrior. I am spunky and spirited. My father trained me to be fearless. He set high standards and pushed me to be an achiever. He trained me to lead. He taught me the value of honesty and integrity. He showed me how to respect the chain of command, while not abdicating my personal accountability.

I may not have been able to speak up when I was a child and people tried to change my name, but I'm not a little girl anymore. I can speak up now. I am not anybody's "little CHAMP." I am a military BRAT... and proud of it. 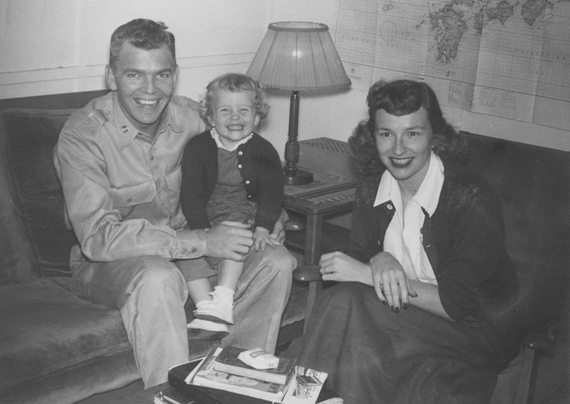 BJ Gallagher is a sociologist and author of 30 books, including an award-winning children's book, "What's the Matter With Henry? The True Tale of a Three-Legged Cat." Thousands of copies have been donated to military brats who have one or both parents serving in war zones overseas.