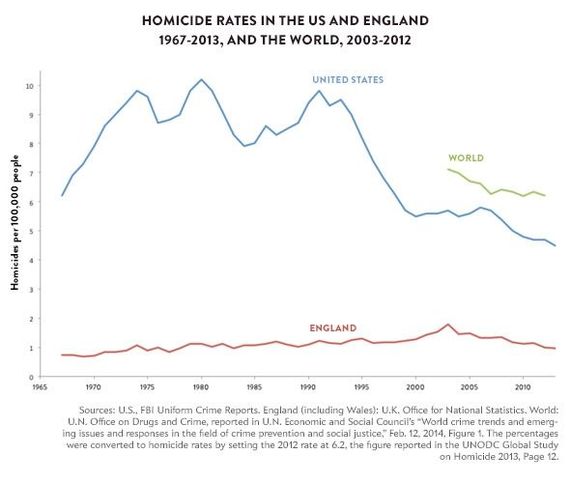 My mother watches cable news a lot. And she's on social media -- especially Facebook -- a lot. When we spoke Wednesday, she asked me if I'd heard. "About what?" I asked. "San Bernardino," she replied. I had heard, but had forgotten about it for the previous couple of hours, thanks to my weekly volleyball match. Playing makes me feel like a kid again.

"What's this world coming to?" she asked, bringing me back to the present. After so many mass shootings, she told me she's afraid that life in America is getting more dangerous, that nowhere in this country can one feel truly safe. She's not alone. Social media, the internet in general and the 24-hour news cycle only feed these fears.

Before I start offering data, let me say that I understand why some people will not want to hear this. Some may even think that the more scared Americans get about gun violence, the more likely it is we'll pass laws that will reduce it. Maybe, maybe not.

What we have seen in the recent past is that fear about crime -- as well as crime rates actually rising from the mid-1960s through about 1990 -- led to our country to embark on a misguided, incredibly harmful set of policies that resulted in mass incarceration, particularly affecting African-American men. Furthermore, heightened fear of terrorist violence -- which can, of course, be perpetrated by people of any race or religious background -- has, shall we say, not brought out the better angels of our country's nature in recent times.

Now, about that data. As the image at the top of the post demonstrates, the U.S. murder rate is now lower than it has been in half a century. According to some measures, the current murder rate approaches the lowest levels seen in more than 100 years. Or maybe even ever.

As for mass shootings in the U.S.? James Alan Fox, a Northeastern University criminologist and co-author of Extreme Killing: Understanding Serial and Mass Murder, has shown that the number of incidents -- defined as any shooting in which four or more people died -- has remained steady over recent decades, despite the doubling of the U.S. population since 1960. Regarding gun deaths as a whole, the data just about exactly parallels the overall U.S. homicide rate.

Let's look at some more data: violence in schools has dropped dramatically in the past two decades, as have the overall rates of physical and sexual abuse of children. The rates of rape/sexual assault and violence against intimate partners now stand at one-fourth the peak levels reached only a couple of decades ago -- and this is based on victimization surveys, so the question of whether such crimes are underreported to law enforcement is not a factor. Furthermore, there's no logical explanation why victims would have been more willing to report such crimes 25 years ago versus today. We were certainly not more enlightened on gender matters then.

This data may well directly contradict the impression many of us have. In fact, Gallup found that, starting in 2001, we saw an increase in the number of Americans who thought violent crime was rising, even though the actual violent crime rate continued to fall, and remains roughly three-quarters lower than it had been at its early 1990s peak.

The last thing I want to do is put people down for being afraid, or, even worse, to belittle the pain and hurt people are feeling. Additionally, it's important to acknowledge that even as murder rates in the U.S. appear to have dropped equally across racial lines, black Americans remain about eight times as likely as whites and four times as likely as Latinos to be victims of murder. Furthermore, although we don't have the data to compare the rate over time, we know that killings by U.S. law enforcement officers is a serious problem, even as the rate of felonious killings of officers stands, thankfully, as low as it has been in many decades.

Separate from the question of whether fear about gun crime and mass shootings is productive or destructive is the fact that knowing the truth is always better than being misinformed. That should go double for us progressives, given that we are supposed to be a "reality-based community."

Armed -- with the truth -- we can still fight to improve our laws. Despite the fact that we are safer from crime now than we've been for many decades, we can make ourselves safer still. We know that where there are more guns, there is more homicide--both across state lines national borders, when comparing economically similar countries. We also know that the NRA--funded by gun manufacturers whose only interest is selling more guns and ammunition--stands in the way of progress when it comes to reforming gun laws.

As Igor Volsky has demonstrated, we need to make clear that the politicians who oppose even the most common sense restrictions on gun accessibility do so because they are in the pocket of the NRA, and thus the gun manufacturers. They don't care that a recent Harvard survey of more than 2,000 gun owners discovered that 40 percent of them acquired their guns without going through a background check. The lap dogs for the NRA won't consider a law that would ban people on the federal terrorist watch list from purchasing a gun, and I'm not optimistic about the chances of a proposal for a similar ban on those convicted of committing acts of violence or harassment at abortion clinics.

It's not about gun rights for them, but about dollars -- pure and simple. Whether crime is going up or down, it is that corruption we must expose in order to convince voters to finally punish -- rather than reward -- those who would make us less safe than we otherwise could be.

(Cross-posted at Daily Kos. Graphics and links are at the original)