(Video by The UpTake)

Besides the media, we reached tons of regular people in downtown Minneapolis who were waiting for buses and on their way home. I told my own "peace list" that there's a simple reason why media shows up which no one need ponder, and that is when there is hard news breaking! It is then that We The People's responses to this very hard news matters. If there was ever a time to stand up to war in this country, it is now, after 8 years and at this key moment when Obama decides to pick up Bush's bloody mantle and follow the war profiteers' path in ordering more death and destruction for years to come in Afghanistan.

I could not contain myself after the pain of seeing Obama not tell the truth about why he's escalating the war on Afghanistan. I understand the disillusion of those political partisans who feel so terribly betrayed by their new president after they gave so much of their time and money to get him elected. (I can hardly believe it myself after doorknocking two large mobile home parks where I live in Apple Valley, the five park and rides throughout the southern suburbs that I set the alarm for 5 a.m. to hand voting material to half-awake commuters, not to mention the RNC protest events in St. Paul, the "women for change" event, and the two protests outside McCain-Palin in Blaine and Lakeville we organized. With all of us working so hard to get Obama elected, I wonder why there is not a greater sense of disappointment. Not only did Obama empower the right-wing war starters like the warhawk congressman I ran against in 2006, John Kline, and the Rush Limbaugh ilk of this country but he has hurt the Democratic Party's chances to get people out to vote the next time around who now see nothing but politics as usual.

So I think if you were against Bush's wars but now support Obama's wars, it really shows nothing but shallow hypocrisy and misconceived political opportunism. I hope people will realize this and please continue to oppose unnecessary wars and military madness!

The march drew a dozen police on horseback and dozens more on foot or bicycle as well as a cavalcade of police vans and cars that swelled our numbers. Their escort was exemplary in terms of professionalism and promoting safety. One of the police cars' headlights behind us put such an effective spotlight on our "Bring 'em home" banner that it seemed to me that they were trying to help us get the message across. The most positive and inspiring aspect, however, for myself, after having been part of so many church basement discussions amongst we gray hairs and grandmas/pas (and even great grandma/pas) bemoaning the difficulty of getting any new energy and blood into the peace movement, is that fully ¾'s of the marchers were young people under the age of 30! A number have spent fully half of their lives living in a country at war that is slowly destroying their futures. At the end, a dozen of the young people displayed a show of conscience by their nonviolent action in the truly Ghandian tradition by sitting down in the street with their banner.

The line midway through Pete Seeger's "We Shall Overcome" song came to mind about the young people showing us all how to not be afraid. And then Ed Felien (some of you know, the activist who publishes Minneapolis Southside Pride newspaper), handed me a copy of his biographical book Take the Streets with him on the cover as a young man 40 years ago and others in the street ending the Vietnam War.

Being peacemakers in a time of endless war is not going to be for the faint of heart but it will certainly fall to the young at heart. 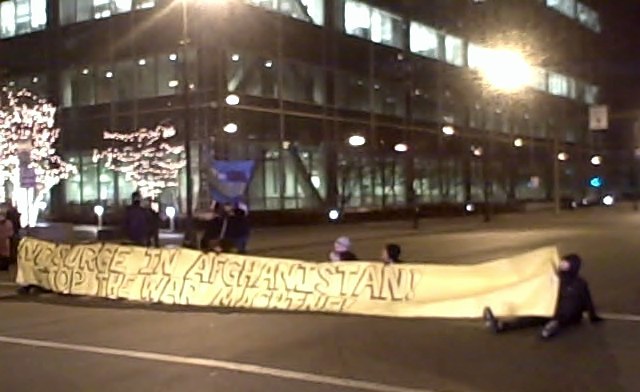