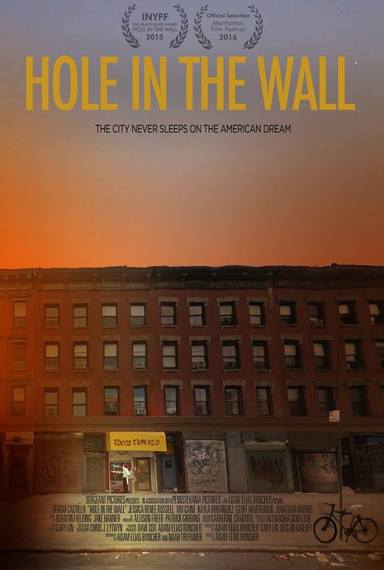 Over three years ago I starred in an independent feature film that was shot in Spanish Harlem. I had little experience in serious filmmaking prior to this movie. I was formally trained in the theatre and up until that point I had only done small film projects ranging from background work to student films to cameos on Funny Or Die to short appearances on reenactment television shows. The shoot lasted 16 days. After three years of anticipation the film will be making its world premiere on Thursday, April 21st at The Manhattan Film Festival. The movie is called Hole In The Wall. I have not been in a feature film since.

The story centers around a Latino working class immigrant who owns a taco shop in Spanish Harlem and his struggle to survive in a ruthless city that wants to consume his ambitious spirit and his loving family. The writer/director Adam Elias Buncher has described the film as a modern day version of It's A Wonderful Life. It is a tale about the constant sacrifices made by this determined Latino worker. It is a story about what it means to live and fight for the American dream. One needn't be Latina/o/x to relate to the main character Oscar Entrega (whom I portrayed). Anyone who has ever met adversity at every turn knows what it means to have no choice but to endure, even under the most dire of circumstances. This theme sounds almost universal.

The film is being released at a very critical time in our nation's history. In such a peculiar and precarious age of anti-immigration sentiment (especially for the Latina/o/x community), the release of the film could not have been timed better. The farcical election for the presidency of the United States has been an exhausting and brutal journey for anyone paying attention to it and the Latina/o/x community has been one of the primary targets of the unapologetic and wrathful rhetoric by the leading Republican presidential candidate and his dangerously devoted followers. But this sentiment didn't start with Donald Trump. He didn't create the racist attitudes toward Latina/o/x immigrants and Latina/os in general. He has merely made it politically acceptable to be open about the bigotry aimed at us. Some have called his campaign a backlash to the "politically correct" movement. Well, you'll pardon this uppity spic for calling out such nonsensical diatribe. The hatred for my community has never perished from the minds of the most detestable. It has and remains deeply rooted in the spirit of American reactionaries and America itself.

The issue of immigration is one as old as time. Why the American film industry isn't making more films about modern immigration is anyone's guess. But what Hole In The Wall does is tell the story of a Latino working class immigrant who refuses to submit to the hurdles which are constantly placed in front of him. He came to this country (how is never revealed) without knowing English and first made his living as a delivery man. It is a past that haunts him. He never wants to return to the days where people were shouting at him in a language he didn't understand or having people slam the door in his face for delivering their food or feeling as though his ambitions of owning his own restaurant was just pie in the sky thinking. He is not asking for a handout. He is working for something, which, for many, is an impossible dream.

President Obama has deported more immigrants than any other president in the history of the United States and almost more than all of the U.S. presidents combined from the 20th century. He may exceed that goal by the time he leaves office. It is deeply tragic that so many immigrants have been forced back to their countries of origins. People like Oscar Entrega have proven themselves to be valuable assets to our nation, yet they remain largely invisible. When was the last time you had a serious conversation with the person who delivered your food? Has it ever crossed your mind to ask for more than change when you hand that person your money? Have you inquired as to what that person's dreams are and what he or she or they want once he or she or they raise enough money? Why is America so accepting of certain elements of the Latina/o/x culture, yet have such disdain for the people who made it? Why are Americans so trusting of Latina/o/x immigrants to babysit their children or remodel their houses or cook their delicious meals or to achingly work in the fields only to reject these people and their culture? Why are these people, who are so vital to our society, treated in such a manner?

Despite the racist rhetoric that spews out of the grotesque mouth of the most heinous presidential candidate, there are more immigrants leaving the United States than coming in. And this is all the more tragic when one factors in the amount of deportations that have occurred. Think of the talent being lost. Think of the brilliance that is being wasted. Think of the potential so many people could bring to the United States. All of this is being lost because of lack of opportunity and systematic bigotry. It really is that simple.

I feel a bit perplexed that there are not more films like Hole In The Wall. The struggle of the Latina/o/x working class is all around us in an almost infinite amount of ways, yet our voices are rarely heard in American cinema. It makes little sense that Latina/o/x actors would not have more opportunities like the one I had. How does a filmmaker justify that in a city like New York? I would really like to know. If Latina/os are the largest and fastest growing demographic in the United States, why aren't producers more interested in the stories we have to tell? Our experiences are as rich and diverse as any other community. Why is there such an underrepresentation of our lives in New York cinema? Why do we continue to be seen in certain stereotypes by the media? Why do we have to work twice as hard only to get half as far and accept half as much?

Hole In The Wall is a film that attempts to capture the true makeup of New York City. The characters featured in the film are of many different backgrounds, which is New York. This solely Eurocentric picture of New York doesn't exist. It never has. And it never will. If art is supposed to hold up a mirror to society, then we are looking into distorted glass when we watch movies and television. It is time that all art be a reflection of our beautiful, tragic, and always harsh reality. And it is time for the Latina/o/x community to be a part of that conversation in a serious way.

Here is the trailer for Hole In The Wall.