On Wednesday I wrote a piece on Huffington Post and another at Open Left talking about the centrality of fixing the foreclosure crisis to any recovery from the economic meltdown. Since the toxic assets at the center of the meltdown are based on mortgages that are entering foreclosure at a rate of one every 13 seconds, we have to address foreclosure as a part of getting America back on its feet. 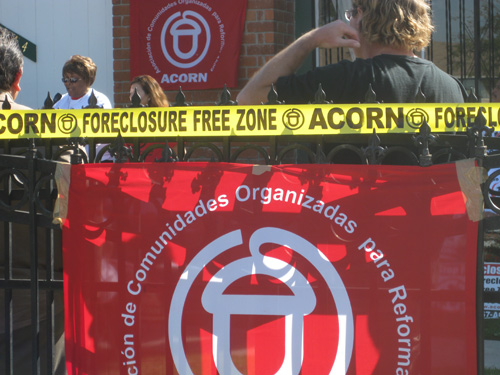 The Homeowner Affordability and Stabilization Plan (HASP), announced in Phoenix on Wednesday by President Obama, which will help up to an estimated 9 million families, is a good first step - and the first serious effort by the Federal government to confront the challenge. But just because there was an announcement does not lessen the urgency of the problem. We are still in a situation where four families every minute enter the foreclosure process. We believe there must be a moratorium on foreclosures until HASP is fully implemented.

So yesterday we at ACORN launched the Home Defenders campaign in seven cities - a campaign to force the question of moratoriums and to press the urgency of this crisis into the consciousness of elected officials on the state and national levels. This is a campaign of refusal and resistance, refusal by distressed homeowners to cooperate with the foreclosure process and resistance to attempts to evict them from their homes. And in some cases it is a campaign of getting people back into their homes.

I wanted to give everyone a report-back from our activities yesterday.

In Baltimore, ACORN member Donna Hanks re-took her home. Foreclosed on last Fall, the house has stood empty since then, a stark reminder of the failure of the system. But Donna joined with 30 ACORN Home Defenders to liberate her home from the bank. Her act of civil disobedience was covered by 2 radio stations, 2 TV stations, the Baltimore Sun, and the Huffington Post.

Donna used bolt cutters to break the lock to the door and re-enter the home. Unfortunately, in the six short months since the home was seized, it has been extensively damaged, essentially partially gutted. The toilets are missing, and the upstairs ceiling is badly damaged. The greatest tragedy here is that Donna worked for months with ACORN sister organization ACORN Housing Corporation to try to get the bank to modify the loan so it could be affordable, but they refused, taking the home and now allowing it to be a haven for squatters and a target of looters.

In Houston, where one in three homes sold in January was a foreclosure and foreclosure sales accounted for 34 percent of all homes sold - a 9-percent jump from the same time last year, Sara Chavez announced her refusal to leave here home. "My mother and I don't leave," she said. A mother of three who cares for her sick mother, she has owned her house since 2004, but has seen her mortgage payment double from $1,000 to $2,000. She joined with ACORN Home Defenders to declare her neighborhoods a "Foreclosure Free Zone". And the Home Defenders backed her up. ACORN member Pennie Saldivar said, "We want to fix this problem. We are willing to go to any means necessary".

We even had a little star power come out to help the campaign to keep hard working families in their homes. In Los Angeles, comedienne Roseanne Barr traveled to Watts to join with Tommy and Debora Beard. The Beards are a teacher assistant and hospital cook who have lived in their home for over 20 years and have lost it to foreclosure in part due to a predatory loan. There is a possibility that allies in the legal community may be able to extend the Beards' eviction process for quite awhile to buy time get Chase to reverse the foreclosure, person after person (including Roseanne) pledged to "go to jail" with the Beards if necessary. 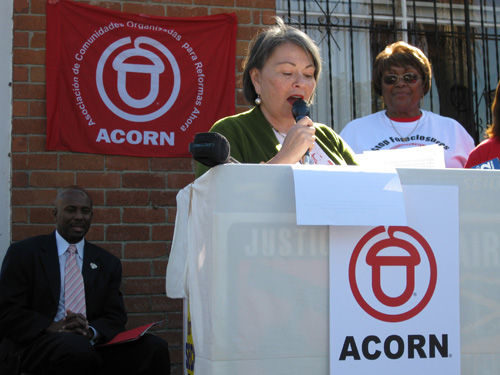 There are other reports from Oakland, New York, and Orlando.

Conservatives have made much of the fact that they think this campaign is really all about helping greedy and undeserving homeowners get a taxpayer bailout. Or they are itchy about the fact that keeping people in homes might involve breaking things like trespassing laws. Or they just plain froth at the mouth because we at ACORN are again standing up for working families.

On the last point, we sure hope they are drinking plenty of liquids because we've been doing this for 38 years and we aren't going to stop just because it gives the people whose ideology led us into this catastrophe the vapors.

On the first two complaints, though, let me say two things. First, we all have skin in this game. This crisis is on a scale that rivals the Great Depression and foreclosures are at the heart of it. Whether you think the homeowners deserve it or not, creating a plan that gets these toxic mortgages performing again is the only way for people to agree on a value for the toxic assets clogging up the financial system.

Second, people are fed up seeing Wall Street get billions in help while the people bearing the brunt of the disaster get eviction notices. They are saying "enough is enough". Like Pennie Salvidar says, families are willing to go to any means necessary to get elected officials to do the right thing.

This is a unique moment in history, one where we can steer the country away from the failures of conservative ideology and toward a fundamentally progressive approach to governing. As Mike Lux put it in the Huffington Post today: "The American family has to take care of each other, has to look out for each other, especially in the hard times, because the misery of our fellow citizens will spread to the rest of us."

This campaign is not just about helping hard working families keep their homes, it is fundamentally about saving the American Dream, about what makes us proud to call ourselves Americans, and about bit by bit making this country stronger.

You can help by asking Congress not to give in to Wall Street and their coming attempts to block the most important aspects of HASP. If we want a new America we're going to have to fight for it

President of The Black Institute & Former CEO of ACORN