Erica Sagrans wasn't in Wisconsin for Wisconsin. After working in D.C. politics -- for former Speaker Pelosi, for Organizing for America, for the DNC -- she was disheartened by the results of the midterm elections, and found herself in London this winter. There, she fell in with the leaders of that season's protests against England's harsh austerity measures, delivered by a recently-elected conservative leader, Prime Minister David Cameron.

As they prepared for a major rally in England, reports began coming in of a movement afoot in Madison, fighting the harsh anti-union laws of another newly-minted conservative leader, Governor Scott Walker. Leaders of the London movement connected with the Wisconsin activists and with Egyptian leaders, forming an intercontinental axis of youth-driven protest.

Now, six months later, all three are back in the news. London is burning, consumed by continued bitterness about austerity. Hosni Mubarak, locked in a cage, stands trial. Wisconsin Republicans narrowly turned back a tremendous effort by Democrats and progressives nationwide to take back the State Senate.

And Erica Sagrans, who went straight to Madison on her return to the States, is publishing "We Are Wisconsin," a collection of the essays, blog posts, tweets and incendiary prose that sparked that state's historic protests. 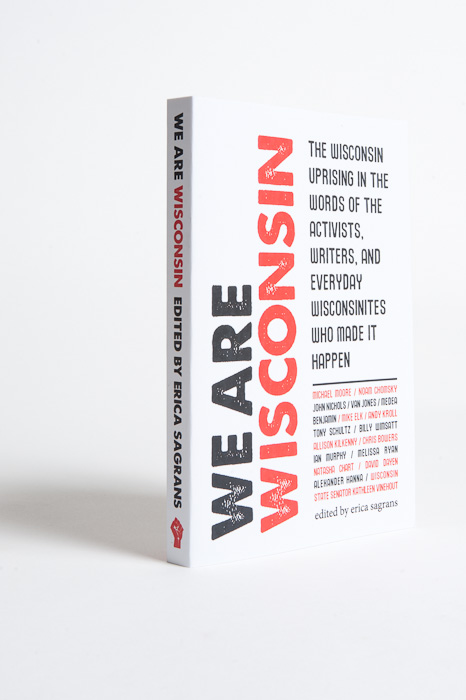 The cover of "We Are Wisconsin."

"I wanted to do what I could to continue that momentum, to continue telling that story," Sagrans told The Huffington Post.

If not the first of its kind, this book will be among the very first to capture the Wisconsin protests. It includes Michael Moore's speech in Madison, an essay by Noam Chomsky on the ties to the Middle East, a statement from State Senator Kathleen Vinehout from "an undisclosed location" during her flight to Illinois, and much more.

It also tracks the social-media narrative, weaving that throughout the book. "The story was being told through Twitter in a really interesting way," Sagrans said, citing the book "Tweets from Tahrir" as an inspiration.

To celebrate the launch of the book, Sagrans, who now lives in Chicago's Logan Square neighborhood, will be hosting a reception and panel discussion at Art In These Times, a Milwaukee Avenue reception space hosted by In These Times magazine. The space is currently displaying a collection of posters and photographs from the Wisconsin uprising.

The book will be on sale at the event, and will also be available as a free PDF download later this week.

For her part, Sagrans is optimistic about the future of the movement. "For me, and for a lot of people, Wisconsin made us think about unions and the labor movement in a different way," she said. "It made us viscerally understand and feel why the right to collectively bargain is so important."

"We Are Wisconsin" conveys that visceral imperative to protect worker rights with the power, clarity, and energy befitting of the protests themselves.

To attend Wednesday night's book launch party, or for more details, click here to find the event on Facebook. To order the book, visit We Are Wisconsin's website.