Hot Pockets are a lot of things to a lot of people. They're a college food staple, after-school delight, Jim Gaffigan punchline, late-night lifesaver, and sleepover essential. At some point, almost everybody's eaten a Hot Pocket -- even people who currently only eat kale for breakfast, lunch, and dinner. But which kind is the best? Well, that's a matter of opinion. Luckily, I'm a man of many opinions, so I filled my freezer with every Hot Pocket in a quest to try them all.

But first, a caveat

This taste-test excludes breakfast Hot Pockets, Lean Pockets, Croissant Pockets, and limited-run varieties, sticking only to lunch/dinner options. This was in an effort to provide consistency. All Hot Pockets were prepared exactly according to the directions on the box.

More: From Gushers to SpaghettiOs: Do Your Favorite Childhood Foods Still Taste Good? 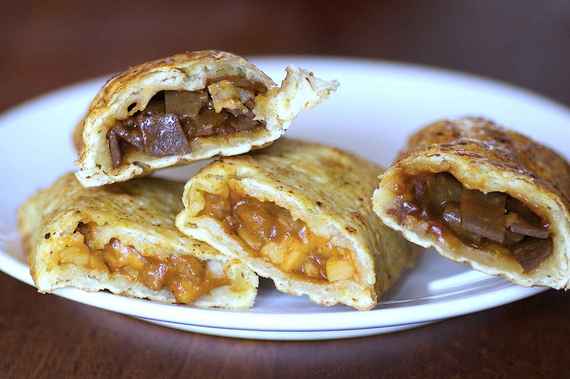 16. BBQ Recipe Beef with Crispy Buttery Seasoned Crust
Confession: I'm not into BBQ sauce, so that certainly affects the ranking here. Its thinly sliced beef and sweet, runny BBQ sauce makes a McRib seem like Franklin BBQ. And be careful -- because the beef is so thin and there's no cheese or veggies to hold it together, biting into it could send an arterial spray of hot and tangy/sweet sauce out the back of the crust.

15. Beef Taco with Seasoned Crust
The taste here reminds me of taco-flavored chips, albeit with big chunks of beef. There's a little spice, but it's all overwhelmed by the seasoning, which tastes like you accidentally dumped a whole spice packet on top of a taco, then shrugged and said "screw it." This can be a good thing or a bad thing, depending on your feelings about taco seasoning.

14. Cheeseburger with Crispy Buttery Seasoned Crust
Ok, I'm confused here, because I taste ketchup, and there's a tomato on the box, but it's all orange and full of meatballs. It tastes like what I'd imagine a person who has never had a cheeseburger might think a cheeseburger tastes like, and that's not necessarily a bad thing. But I'm a little sad, because Hot Pockets also makes these little round burger bites that -- one time, after a long bar night -- reminded me of White Castle in all the best ways. The onion chunks are nice, though!

13. Meatballs & Mozzarella with Garlic Buttery Seasoned Crust
The sauce is super sweet and tangy, but the balls are rubbery little wads of danger if you're too impatient to let things cool, which I am. Basically, when you bite down on the crust, the meatballs shoot, fully formed, into your mouth. Yikes. This tastes like pizza, but makes you miss pepperoni. 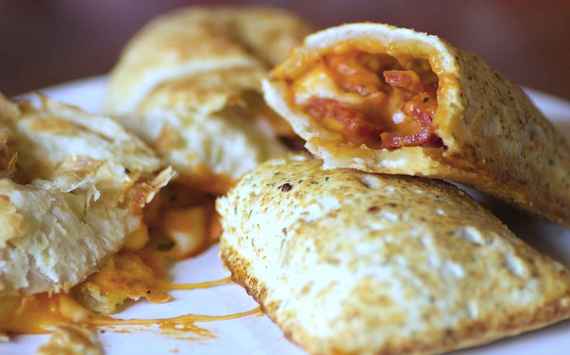 12. Pepperoni & Sausage Pizza with Garlic Buttery Seasoned Crust
The addition of the sausage means less pepperoni, and that means less happiness in my life. Also, these little chunks of sausage have a pretty lopsided spice/seeds-to-meat ratio, which changes the dynamic of the sauce/cheese into something much more breakfast-ish.

11. Five Cheese Pizza with Crispy Crust
The old-school crust is welcome -- and almost croissant-like -- but for some reason this isn't as good as the Four Cheese. It makes no sense, because the same cheeses (Parmesan, mozzarella, cheddar, and provolone) are simply joined by Romano. But it changes the flavor dynamic drastically, proving that not everybody loves Raymond after all.

10. Pepperoni Pizza with Garlic Buttery Seasoned Crust
It's the basic Hot Pocket pepperoni you love, but with a different crust! On the downside, the pepperoni flavor and sauce overwhelm it, so you can't quite taste the garlic. Plus, it's more dense and less flaky than the OG pocket. Stick with the original (see below).

9. Chicken, Broccoli & Cheddar with Crispy Buttery Seasoned Crust
The broccoli is actually slightly crunchy, and I'll be honest, it's nice to have a little veggie action right now. The chicken suffers a bit from blandness. But it's not a salt overload, so I'm pretty cool with this one.

We tried every Hot Pocket so you don't have to. Head to Thrillist.com for the top 8 Hot Pockets and find out which one took the crown!