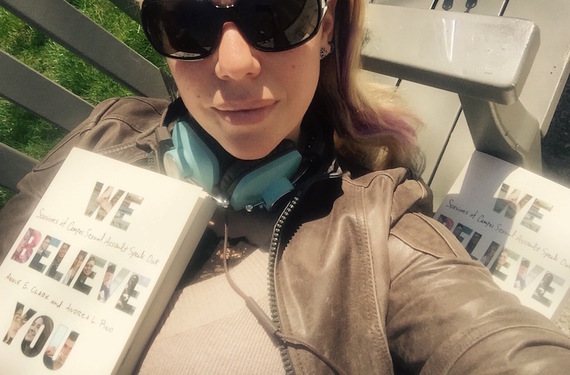 Alt-Text: A photograph of the author of this column lying on a park bench with multiple copies of the book We Believe You.

I decided to take a train. The distance between Chapel Hill and D.C. is too far for me to drive alone without getting antsy and to close to fly without feeling like I'm wasting an immense amount of money. My friends say Megabus is the way to go, but trains have their allure: the big seats, the big views, the rumble, the speed--both fast and slow at the same time.

A train it was.

I was heading up for the book launch event for We Believe You: Survivors of Campus Sexual Assault Speak Out. I'd contributed a chapter, and the thirty-six contributors had all been invited to come to the launch. We couldn't all make it, but I could.

Writing my chapter for We Believe You was not the first time I'd written about the things I wrote about. I'd already written about being raped as a kid and being raped again as a grown-up, reporting my campus rape, the reasons why I didn't report being raped back when it happened, trying to take my own life, and being a mom--all of those things wrapped up in a terrible and beautiful package. We Believe You wasn't even the first book I'd been a part of. On the contrary, I've published many books, nonfiction and novels.

When the two editors of We Believe You first asked me to contribute, I was hesitant. I'd already told my "rape story," I thought. Also, as a professional writer, I'm hesitant to write for free, and the contributors to the collection weren't paid. But the editors are dear to me, and I believe in their work, so I agreed. I put my piece together and that was that. I didn't think much more about it.

And then, as the months went by, being a part of We Believe You started to matter more. I formed a relationship, via phone and email, with the book's publisher. To see how much of her heart she'd thrown into the project made me wonder if perhaps I were missing something.

That is not unusual for me. I often underestimate important events.

Because I wondered, I booked a train. And then I was on the train to D.C. for the book launch at the Sixth and I Historic Synagogue. I put on a dress. I arrived at the venue in a hired car with the book's editors along with another contributor, A.

Another friend had gone ahead to Sixth and I to arrange things, kind of like an advance guard. When our car arrived at the venue, the advance guard shuttled us in the back door. "It's crazy out there," the advance person told us. "Sneak in this way."

It's crazy out there?

That's when my heart started to beat a little funny. I ignored it. After all, I'm a novelist. I've read to crowds. I've given keynote lectures to theaters full of people. This event was not a big deal.

See, above, about my tendency to underestimate. That flaw is going to become important in about two seconds.

The advanced guard led us into the green room, where some bookstore ladies had set out copies of We Believe You for the two editors to sign. One of the editors asked how many folks were out in the synagogue proper. "Nearly three hundred!" the bookstore lady answered. "Amazing!"

That's when I had my anxiety attack.

They happen now and then. In large crowds, when I'm home alone with my kids late at night (yes, I need a dog), when I'm startled by a loud noise, when I saw The Hunting Ground for the first time in a crowded antique theater and this horrible woman next to me scolded me for texting a friend to ask how much longer the movie was going to be because I felt an attack coming on.

(Horrible Woman: It was at the Chelsea Theater in Chapel Hill. Your scolding sent me into a sobbing fetal ball in the lobby where the teenaged popcorn hawkers nearly called 911. I hope your self-righteousness was worth it. Also, in part because of you, announcements at all related events now include a statement that it's okay to send text messages if you need to--just like I needed to that night. So, really, applause! Your small cruelty made the world a better place.)

This is what the onset of a post-traumatic anxiety attack feels like (for me). I can only see right in front of me because my peripheral vision breaks. I tend to squeeze whatever I'm holding very hard. If I'm not holding anything, then I squeeze my own hands. I've hurt myself doing this, torn the skin between my fingers, without noticing. I'm unable to answer questions properly, or make decisions. I get very quiet, and back away from everyone. I'm one second away from a sobbing fetal ball.

At that moment in the green room, the bookstore ladies said they didn't have seats in the front reserved for contributors and told us we'd have to squeeze into the room full of three hundred random people. Most likely we'd be seated alone because the place was packed, and we'd have to find seats at the last minute.

I turned to A., the other contributor who'd ridden in the car with me, and said, "I have to leave now."

So much for the train ride. So much for wanting to be there for something that seemed like it might be important. For a day spent on a broken southern train that ended up two hours delayed. For taking two full days away from my husband and kids just for this one event for this one book.

This is what it means to be a rape survivor. You are surprised, constantly, by your brokenness.

A., the other contributor, called one of the editors over from where she was signing books. A. told her about the seating situation. The editor was annoyed. She politely informed the bookstore ladies that the contributors needed reserved seating at the front of the venue, and they needed it now. The bookstore ladies made it happen.

And then we were walking out. And then I was sitting with my back to a large room of people, but because they were to my back, I could pretend they weren't there. And then I could watch my friends on stage with a United States senator as the emcee, talking about the book I was a part of, and I could feel so proud of them and of what they had accomplished. And I could stay after and meet the other contributors to the book, most of whom I'd only connected with on social media, and realize why the book was, indeed, special.

And to join together in a book, to expose ourselves together to the journalists who take glee in tearing down rape survivors (you know who they are) (eyeroll), with a title like We Believe You?

That's basically a neon-lit GFY to the deniers, the lazy prosecutors, the victim-blamers, the careless campus officials, and yes, the pond-scum journalists--to everyone who makes a survivor feel like shit even when the survivor has never told anyone but a bathroom mirror about being raped.

To the person who has never told anyone but the bathroom mirror that you were raped: I believe you. We Believe You. Even if you're broken. Like me.

To read more of Katie's writing, sign up for her monthly letter, bit.ly/pryalnews, or visit her blog, katieroseguestpryal.com. You can purchase We Believe You as an ebook and in paperback.