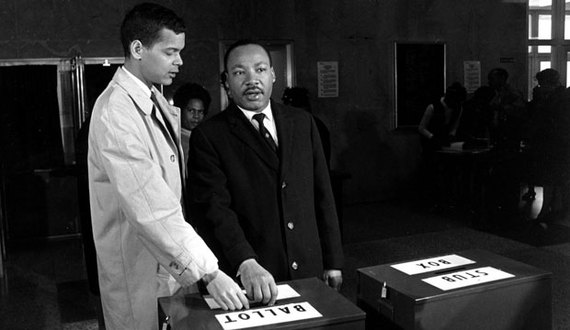 We have the antidote to voter suppression: massive voter registration.

We proved it 50 years ago during Freedom Summer. We proved it again in Florida in 2012, when NAACP activists registered 115,000 people in a year when the legislature had effectively made traditional voter registration strategies illegal.

We need to prove it again this summer. As we prepare for November's midterm elections -- and look forward to 2016 -- our focus should be on the stretch of heavily black states and counties below the Mason-Dixon Line that make up the "Black Belt."

Our new report from the Southern Elections Foundation and the Center for American Progress shows that a massive wave of voter registration could upset the balance of power in many Black Belt states.

The conventional wisdom would say that this is impossible -- that candidates who represent the views of communities of color and progressive whites simply do not have a chance of winning statewide office in these southern states. This conventional wisdom is wrong for two reasons.

First, it ignores the changing demographic and political trends in the Black Belt. Black re-migration and Latino and Asian immigration are reshaping the demographics of the region. Meanwhile, the extremism of the ruling far-right wing is pushing away white women and young voters of all races.

Second, it takes a pessimistic view of progress. Many people look at the Black Belt and say that nothing has changed for years, and ask why we should invest in the region. This has it exactly backwards. If we invest, then things will change. The light of southern politics has no dimmer switch. It is either on or it is off, and we have the power to switch it on again.

The summer of 2014 can be a season of revival. In the coming months, as black political conventions convene across the country to discuss their political strategy for the coming year, we should remember the mistakes of 2010, when low turnout rates led to a wave of extreme right-wing candidates winning office across the country.

We have the power to make sure that does not happen again. In some states it may ultimately be too late to marshal funds for the 2014 election, but there is no reason we cannot start focusing on 2016.

We have the power in Georgia, where the New Georgia Project is working methodically to register 120,000 black, Hispanic and Asian American voters in the state -- the biggest voter registration drive in 20 years.

We have the power in Mississippi, where the Mississippi Freedom Summer 50th Anniversary Conference is meeting in late June to reflect on the past five decades of political organizing and put a plan into action for the next five decades.

We have the power through all of the black civic organizations, which can collectively reach hundreds of thousands of people of color below the Mason Dixon Line, and through the growing number of unions and other progressive organizations that are sprouting in the South.

Doing the work to register voters in the South will take our collective time, treasure and dedication. But it is crucial, and it can make the future come faster than many people think.

This was originally posted on TriceEdneyWire.