There's no good excuse for Congress's disgraceful delay in responding to the dangerous Zika virus. But the worst excuse of all is that we can't afford to act. In fact, we can easily pay for a comprehensive response to this public health threat simply by closing a single corporate tax loophole. 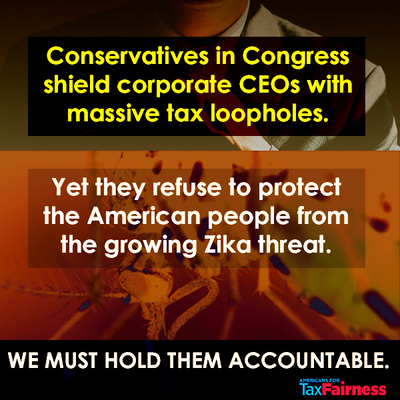 The House and Senate adjourned for its Memorial Day recess without providing the $1.9 billion President Obama urgently requested three months ago to fight Zika, which can cause crippling birth defects. The head of the Centers for Disease Control and Prevention recently warned that there is only a "narrow window of opportunity" to effectively fight the disease. Hundreds of cases have already been reported in the continental United States.

Each chamber of Congress has passed its own version of legislation--neither offering the full funding the Administration sought--but members left town without reconciling the two bills, ensuring more delay. One leading House Republican claimed the slow and incomplete Zika response was due at least in part to the GOP's desire to "pay for it and not add to the national debt."

How ironic? Congress showed no such concern for fiscal prudence just six months ago, when it passed a $400 billion corporate tax cut without paying for any of it. Every dime went straight to the deficit. Apparently, deficits are no bar to ladling out tax breaks to corporations, but can block efforts to protect the physical health of the American people.

Operating under this double standard, the House decided to fund the Zika emergency response at about one-third the level proposed by President Obama and to pay for it by draining funds intended to pay for an earlier but still potent Ebola threat. (In the face of Congressional foot-dragging, the Administration has already been forced to tap Ebola funds, but would replenish them in its Zika funding request. The House bill would not.)

Instead of stealing from one vital medical effort to pay for another, we should raise the funds needed to effectively address all our public-health needs. One easy way to cover the cost of the Zika response is to close a corporate tax break that facilitates excessive CEO pay.

The stock options loophole lets corporations claim on their taxes a much higher expense for options (stock-based compensation mostly granted to top executives) than they really cost. Artificially inflating expenses cuts corporate tax bills. This blatant corporate giveaway costs us $25 billion in lost revenue over 10 years or around $2.5 billion a year, according to a Congressional estimate.

And this is one of the smaller corporate tax loopholes. The biggest one allows American firms to indefinitely avoid paying almost $700 billion they owe in U.S. taxes on $2.4 trillion in offshore profits, according to Citizens for Tax Justice. Corporations dodge tens of billions of dollars in taxes a year through other loopholes as well.

Thanks to deductions, credits and other loopholes, few companies actually pay the official rate. A government study recently reported that large, profitable U.S. corporations paid an average federal tax rate of just 14% between 2008-12. Due in part to this low effective tax rate, the share of total federal revenue coming from corporations has shrunk over the past 65 years from one in three dollars to just one in ten.

The slow and stingy reaction to the Zika emergency by conservatives on Capitol Hill is just the most extreme example of skewed priorities favoring the wealthy and big corporations. Congress should be shielding the American people from public health threats, not shielding corporate tax loopholes from long-overdue reform.

Please join Americans for Tax Fairness and our partners to call on Congress to fund an emergency response to Zika by ending corporate tax loopholes.