What is Pay to Play? Commonly held, pay to play is a form of getting a special deal because you paid someone off. Usually this is an indirect transaction, because of clear legal guidelines, and so creative ways are devised around long-standing common-sense laws prohibiting politicians from taking bribes. For instance, when Virginia Gov. Bob McDonnell was asked to testify in his corruption trial as to who gave him a lavish Rolex watch, the governor artfully pointed out the gift tag stated "from Santa." Plausible deniability, indeed. 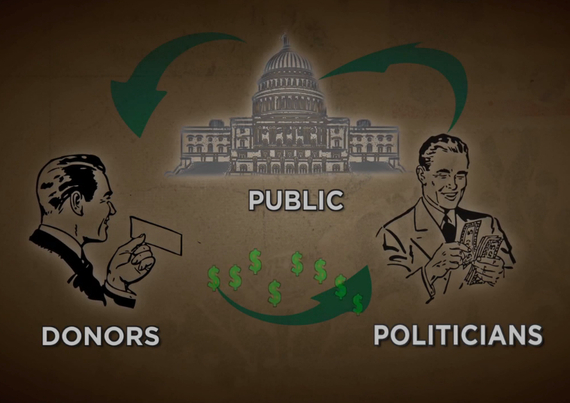 But while the McDonnell tragicomedy may be the stuff of Lifetime movies, the reality is, there is not much difference from a first family taking goods to endorse a company than when a candidate for office takes thousands of dollars in campaign contributions from those who expect a personal return. And since the Supreme Court's Citizens United decision removed limits to outside spending in elections, the TV ads that dominate political campaigns are basically unregulated as far as spending or disclosing who is paying for them. As we have already seen with Super PAC sugar daddies like Sheldon Adleson, one billionaire with a bug up his ass can get presidential aspirants pirouetting.

And so it is with anticipation that we witness an historical event this week in the Senate, where a debate was held over introducing an amendment to the Constitution that would undo some of the shock waves from Citizens United. Scheduled to be brought to cloture by Sen. Harry Reid Thursday, the Democracy For All Amendment is a tag-team of amendments introduced by Rep. Jim McGovern in the House and by Sen. Tom Udall in the Senate. Down the road, this would then have to clear the House of Representatives, where it is sure to pass like a kidney stone.

Yet while this issue of money overwhelming the political process may need debate on Capitol Hill, the rest of the country has been in agreement for some time that reform is needed and that their elected officials do not prioritize their constituents' interests. In my recently-released documentary, PAY 2 PLAY: Democracy's High Stakes, I set out to look at ways outsiders can have a voice in our political process in order to be able to help bring about meaningful campaign reform.

Spanning eight years of recent political turmoil, PAY 2 PLAY helps connect the dots between the obstacles we face in fair and open elections, how these impediments were built over time, and how people power has had a provable impact on setting the country toward our next era of reform. From political newcomers in the swing state of Ohio, to activists on the front lines protesting ALEC, to L.A. street artists risking arrest and injury to get their message up, I found many people speaking to the same inequality in different ways, and using their voices boldly to make a profound impact. It may be hard to envision how our actions and words can be so interconnected, like ripples in the ocean. In this film I was able to follow how small ripples became powerful waves over time and across the country.

While we may have our debate in Congress this week in an unprecedented pushback to Citizens United, we have larger reforms to achieve in order to ensure the dream of democracy this country is always striving for. Included in the end of my film are the following recommendations, a modest proposal for how to put an end to our pay to play system.

These reforms are a start, and not easily achieved, but I believe as our society evolves, these steps toward democratic inclusion will become a popular demand that drives our national experiment into a thriving new era.

PAY 2 PLAY is now showing in New York City and opens this weekend in Los Angeles and Washington D.C.