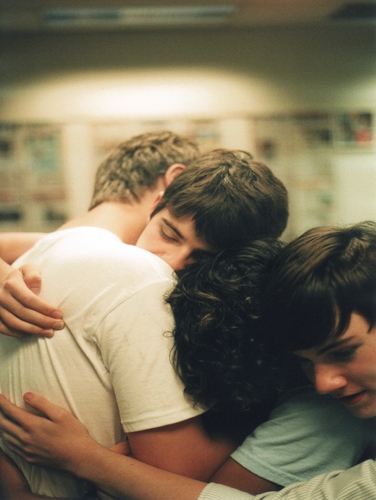 What this world needs is a new kind of army - an army of the kind!

It is October 2015. And, as of last Thursday, October 1, there have been a total of 45 school shootings in the U.S. this year. We see this news, but we no longer feel it; we mourn the lives lost, but we feel resigned to the power of a broken system. As President Obama put it, we've "become numb to this."

We cannot become numb to this.

Many people fit the profile of young men like Chris Harper-Mercer. They feel left behind, ostracized from communities who don't understand them, they struggle with mental health challenges and learning disorders and don't know where to turn. And instead of continuing to "other" these individuals, we need to intervene early, we need to embrace them, care for them, show them that they are not alone. As I mentioned in my piece on the anniversary of the Newtown school shooting, isolation exacerbates mental illness, and we need to focus on building caring communities that "are more inclusive and promote healing for all."

One of the ways to do this is to pay attention, because when someone is in serious distress, there are always signs. Chris Harper-Mercer, for example, left digital trails of his obsession with mass shootings, guns, and the IRA on his Myspace page. Our social media and online profiles are increasingly becoming the platforms on which we share our best and worst selves, and at times, tell the world the harm we intend to do. Last week, Jim Carrey's girlfriend, Cathriona White, tragically died from suicide. But before she died, she posted on Twitter: "Signing off Twitter, I hope I have been a light to my nearest and dearest." A post like this is worrying, and should have set off alarm bells to her online community. But why didn't it? These eerie warning signs in our digital footprints are a wakeup call that we need to be vigilant, that we need to see and reach out to those members of our community -- both online and offline -- who may be in crisis.

Over the past few days there have been renewed calls from officials, specifically Roseburg Sheriff John Hanlin, that we should not publicly name Christopher Harper-Mercer as the shooter so as "not [to] give him the credit he probably sought."

This is a dangerous move for several reasons. As DJ Jaffe, Executive Director of Mental Illness Policy Org., puts it, we cannot bury our heads in the sand. Refusing to name the perpetrator not only prevents us from learning more about a shooter's health, and what might have caused them to commit mass murder, but also won't necessarily prevent more mass shootings from happening.

Not naming the person also goes one step further in dehumanizing and othering the individual behind the action -- it reveals how much we want to distance ourselves and remove all culpability in the violence. Chris Harper-Mercer was a person who was failed by our collective complacency; and by painting him as a monster without even a name, we explain away his actions as outside the realm of human comprehension. We wash our hands clean. We admit that there was nothing we could have done, when that is, in fact, false. We could have done something.

There are many pieces to this complex puzzle but another important place for prevention is within our schools. It should not be overlooked that most of these shootings take place in institutions that house our most vulnerable citizens -- our children. Here are some of the questions we need to be asking ourselves: Are schools the caring and safe communities they should be? Are we doing enough to ensure that students get help for mental health, social, and learning challenges? Do students feel invisible? Are they being bullied? How can we create inclusive communities inside the classroom?

This month at the inaugural Emotion Revolution Summit, co-hosted by Lady Gaga's Born This Way Foundation and the Yale Center for Emotional Intelligence, we look for answers to these questions. At the heart of the conversation will be the need to make schools positive social environments, where social and emotional learning (SEL) is just as important as academic learning. We need to make schools sites of inclusion not exclusion, and places where we support the holistic health of all individuals together. Perhaps if Chris Harper-Mercer had been nurtured in an environment that valued mental well-being, inclusion, and compassion, we might not be having this conversation today.