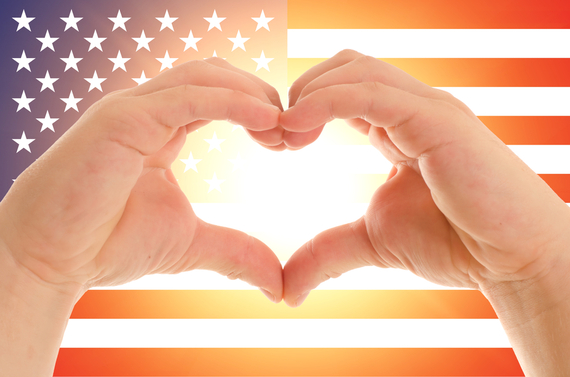 America the great, land of the free
Land that has welcomed the immigrant me
Country whose heart goes from ocean to ocean
People of openness and of devotion

People in power are preying on fear
They know which few words will elicit a cheer
They're pulling the trigger and they do not care
They're up on a pulpit, they're not down there

America's built on acceptance of others
No matter the color we all are just brothers
There's not one religion that's better for all
Our borders are open, there isn't a wall

We help those in need and stand up for what's right
We're never the ones to back down from a fight
Those running for office - here is your clue -
We fight for each other, we don't fight for you!

We're a land of the free and a home of the brave
And your speeches of fear aren't making us cave
We remember what made our America great
We're a people who have chosen Love over hate!

Allen Vaysberg is a Recalibration Expert and creator of the SEAMLESS method who facilitates people's transition from unfulfilled and stressed to doing what they love and being at peace. He speaks on life purpose, career change, work-life balance and the recalibration process and runs online programs helping people re-calibrate their lives.