My husband and I found out that our daughter Penny had Down syndrome two hours after she was born, and we shared the same instinct. We wanted to run away. Within minutes, I had the route planned out from the hospital room to my grandparents' summer cottage, three hours north, at the end of a secluded dirt road that would be abandoned in the wintertime. No matter that the cottage had no insulation against the December cold. It represented a familiar and safe place that would take me far away from everyone else, and I wanted to get there as quickly as possible.

For years, the memory of that desire haunted me, until I finally realized that every time I had envisioned our escape, I envisioned us as a new family of three. In other words, I wanted, desperately, to run away from the doctors who were predicting a life of difficulty and hardship, from the nurses who I imagined whispering about our situation, and even from friends and family who, I suspected, just wouldn't know what to say or how to think about us as anymore. I didn't want to run away from Penny. I wanted to run away from everyone else.

And I wanted to run away from the future. I was scared of the labels that had all of a sudden been added to our family. I was scared of therapy and specialists and perhaps most of all, special education. I was scared that Penny wouldn't learn, wouldn't make friends, that school would be a source of stress rather than a community in which she could flourish.

We didn't run away. Looking back on it, there were some reasons to fear. People still use words about kids with disabilities as jokes and slurs. In Penny's short lifetime, that list includes everyone from high government officials to TIME magazine to high school kids walking past me on the street. And plenty of people still see Down syndrome as a source of suffering or assume that Penny's life will be impoverished as a result of her extra chromosome.

But I've also found a host of people who want to see Penny succeed, and if there is any place that she has been accepted and supported it has been at school.

It is six and a half years later, and we just moved to a new town. A few days back, Penny and I visited her new school. She stuck out her hand to introduce herself to the women who work in the front office. We noted the fresh green and blue paint on the walls. And we met Penny's two teachers, one of whom has training specifically to support students with special needs. If first grade is anything like kindergarten, Penny will thrive. She will make friends and read chapter books out loud and squirm her way through art class and yearn to grow tall enough and strong enough to do the monkey bars all by herself.

Forty years ago, Penny might have been denied access to a free public education. Forty years ago, we might have been advised to institutionalize her upon birth. But in recent years, parents, teachers, and legislators have worked to ensure a place for kids like Penny in our nation's classrooms. It isn't always easy or pretty. Plenty of kids still suffer the injustice of unequal resources, abusive classroom aides, the social ostracism that can come from peers and teachers as a result of their disabilities. But the doors are open to them, at least in legal terms. And countless families can attest to the value of including kids with special needs in our classrooms, both for the kids themselves and for their peers.

This morning, our whole family walked down our new street to wait for the bus. We stood alongside four other kids from our neighborhood, and when the bus finally arrived, Penny raced to board it, hand in hand with a third-grader who volunteered to be her buddy.

Six years ago, I wanted to run away with my little girl bundled up in her receiving blanket to keep her protected from the world of Individualized Education Plans and reading assessments and behavioral modifications. Today, with gratitude, I watched my little girl run away from me. 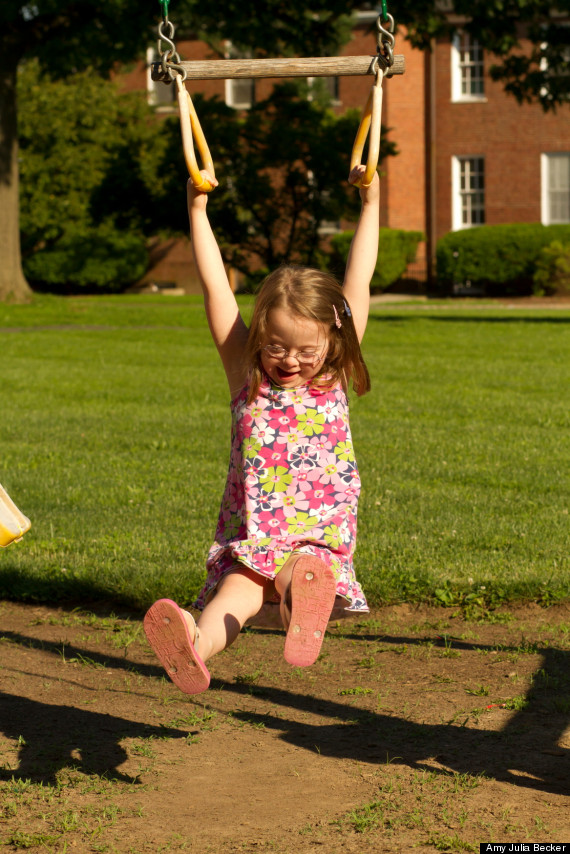